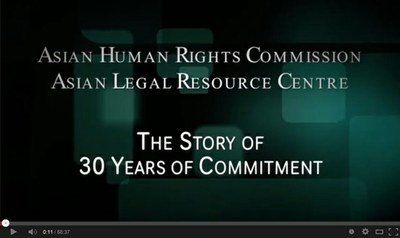 The Story of 30 Years of Commitment is a documentary (now accessible online) produced by Josefina Bergsten, which traces 30 years of work of the Asian Human Rights Commission (AHRC) and its sister organisation the Asian Legal Resource Centre (ALRC). Both the AHRC and the ALRC are based in Hong Kong, and work in Bangladesh, India, Nepal, Pakistan, Sri Lanka, Myanmar, Cambodia, Indonesia, Thailand, South Korea, Hong Kong, and China.

The organisations were launched in 1984. The period was marked by the emergence of several authoritarian regimes in Asia. General Ne Win established a military regime in Burma in 1962.  General Suharto established yet another military dictatorship in Indonesia after a horrendous massacre of about 1 million people in 1965. Subsequent years witnessed several military coups in Pakistan. In the Philippines, the elected President Ferdinand Marcos declared martial law and established an authoritarian regime. Indira Gandhi, the then Indian Prime Minister, swayed in the same direction. And in Sri Lanka, President J.R. Jayawardena radically altered the country’s constitution and acquired for himself absolute power.

All these and many other attempts elsewhere in Asia, to discard democracy and the rule of law and to deprive basic protections to the people, particularly to the poor, generated many forms of resistance. When faced with repression, the problem of suppression of human rights emerged as one of the major themes in the political life of Asian countries.

Subsequently, the organisations expanded their work in response to the struggles of the people, and set about developing a suitable model for cooperation within changing Asian contexts.

This documentary highlights the major areas of work of the AHRC and the ALRC and the significant achievements of the human rights activists involved in these organisations. Josefina Bergsten illustrates the story of these two organisations with archival images and video footage of various campaigns, meetings, and debates of human rights activists from countries across Asia.

« PHILIPPINES: Three months ago, a 14 year-old girl was allegedly raped and murdered by two suspects who were not charged