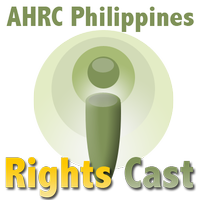 (Hong Kong, January 26, 2012) In this episode of cast, the AHRC comments on two television reports that illustrate how fundamental rights to the fair trial of persons arrested by the police and held in custody were disregarded.

In these reports by the ABS-CBNs local TV Patrol, a man was arrested for allegedly selling illegal drugs near a police station in Dagupan City; and another man was lynched by bystanders, after he had petty argument over a parking lot, before he was turned over to a police station in Cagayan de Oro City.

These reports are not unique in themselves. They may be commonly seen in local and national television reports, read in daily newspapers and heard on radio stations.

However, the AHRC express concern that this practice also illustrates the absence of adequate legal protection to any person, particularly those arrested for committing criminal offenses, to due process and fair trial. In the Philippines, suspects have since resorted to defending themselves to clear in names via media interviews.

It is a common knowledge that persons arrested for ‘common crimes’, whether they are innocent or not, will have no adequate legal aid or representation for their defence at the early stage of their arrest.

« SRI LANKA: Girl student of Ambakotte Tamil Vidayalaya in Kandy was severely beaten by the principle and forced to return to school against her will