Home / News / PAKISTAN: Activists must stand up to enforced silence in Pakistan

PAKISTAN: Activists must stand up to enforced silence in Pakistan

At the 34th session of the United Nations, on 13 March 2017, the AIPD and UKPNP held a joint Parallel Side Event. Mr. Baseer Naweed, Senior Researcher at the Pakistan Desk of the Asian Human Rights Commission, made the following speech during the Side Event:

The freedom of expression was never granted, in spirit, to the common citizens of the country. The irony is that this right is a luxury that only those who fall on the right side of those who control the State are allowed. Restriction on freedom of expression is the most lethal to other fundamental rights; curbing free speech is the most dangerous of all subversions that can defeat civil liberties in its entirety. Threat to free expression is cumulative in its effect and can lead to a general disrespect for the right of the citizen. 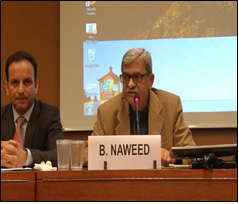 Pakistan has been ranked 142 in the World Press Freedom Index in 2016 by Reporters without Borders. The “Freedom on the Net 2016” Report, by Freedom House, a US based research firm, has placed Pakistan in the list of countries with the lowest score for “Freedom on the Net”. Moreover, Pakistan ranks among the bottom 10 countries for supporting free speech, a global freedom of speech index, recently revealed by Pew Research Centre. Then, the Reputation Institute, in its annual RepTrak Index, named Pakistan in the list of countries with the worst reputation.

Freedom of expression and the Pakistani establishment have always been strange bed fellows. The freedom to express one’s thought and views are only permitted and encouraged on paper. Since its inception, 70 years ago, the Pakistan State has been grappling with the existential questions of democracy, autocracy, dictatorship, and sharia laws.

The liberty to speak one’s mind without fear of repercussion is fast shrinking. The masses live under constant fear of being trolled online and harassed and threatened in the real world. No one dares speak for his or her rights, or in favor of the marginalized, as if it has become a de facto crime. To condemn religious extremism, mass corruption, and military dictatorship is akin to blasphemy and is not permitted. 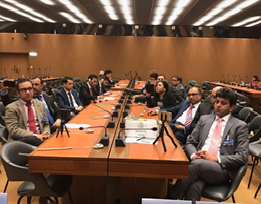 Recently, a dozen social media bloggers and activists were picked up and tortured by the agencies; they were punished for criticizing the Military establishment and exposing mass corruption. After their release, three of bloggers were forced to leave the country.

The systemic wiping out of intellectuals and human rights defenders is deplorable and condemnable; the intellectual genocide must halt immediately. By allowing extremists elements to propagate their hate and silencing the moderates, the State is infringing upon the people’s right to freedom of speech.
There has been a dramatic rise in censorship on both journalists and media houses that are facing a crackdown on dissent and freedom of expression under the pretext of combatting extremism, terrorism, and blasphemy. Journalists, scholars, human rights defenders, bloggers, and political activists are routinely attacked for writing and commenting on religious extremism and abuse by security forces.

Maintaining a contemptuous stance on civil liberties, the State is enacting more laws to restrain free speech, such as the Prevention of Cyber Crime Act, 2015, worsening the climate of suppression that has engulfed Pakistan with the ad hoc enforcement of black laws such as the Protection of Pakistan Act, 2014, and enforcing harsh blasphemy laws. Freedom of expression is stifled in electronic and print media, especially in the vernacular press, which has deeper penetration among the masses. Freedom of expression, as guaranteed under the Constitution, has repeatedly been suppressed in the name of national security or the glory of Islam. Writing or speaking against the Military, particularly the ISI (Pakistan’s intelligence wing) has been considered taboo, and no media house dares to cross the line.

Ladies and gentlemen, may I dare to state that only the brave and the honorable men are never afraid of freedom of thought and freedom of expression of ideas.

Without freedom of expression the populace is reduced to a herd of sheep led to their slaughter, silent and subdued. In the face of religious extremism it has become increasing imperative for activists, being champions of human rights and dignity, to resist and raise their voice amidst deafening enforced silence.