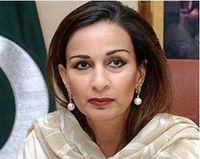 (Hong Kong, 25 January 2013) The Supreme Court of Pakistan, in its effort to gain popularity with the fundamentalists, has admitted a petition filed against Islamabad’s ambassador to the United States of America for committing blasphemy by demanding the withdrawal of the death sentence from the blasphemy laws. The petition was filed by a business man from Multan, Punjab province. Mr. Faheem Akhtar Gill was infuriated after watching an interview of Mrs. Rehman and tried to lodge a case against her for committing blasphemy with the police. When, initially the police refused to accept the case he filed cases on different occasions in a session court and then finally in the High Court of Punjab where the honourable judges also rejected his plea to book Rehman. However the Supreme Court (SC) has taken up Gill’s petition against Rehman for regular hearing and asked the police to conduct enquiries into the charges of her having committing blasphemy and report back to the Supreme Court. This creates doubts that the Supreme Court is, in fact, trying to influence the police to ‘find’ something against another ambassador to the USA.

There was no outcry within the country against Ambassador Rehman with regard to her comments but the Supreme Court without any concrete evidence has taken up the petition for hearing and again transferred it to the police for enquiry. In the initial stage the police already rejected the application of the petitioner as they did not find any concrete evidence of her having committed blasphemy. The question begs to be asked that if the police did not find any evidence before how it might be possible that it suddenly exists now.

Please sign the petition, by clicking  to stop misuse of the blasphemy law and the calculated efforts by the Supreme Court to suppress the freedom of expression in the country.

The Supreme Court (SC) hit the world headlines once again; securing the top slot when the convoluted political maze of extremist militancy hit the country. On 16 January it admitted for hearing a petition seeking the conviction and sentence of Mrs. Sherry Rehman, Pakistan’s latest Ambassador to the United States of America on the grounds of committing blasphemy. The petitioner, Faheem Akhtar Gill of Multan requested the court to register a case against Mrs. Rehman for allegedly committing blasphemy in a TV interview in 2010.

Mrs. Rehman, as a member of parliament in 2010, in an interview with a private TV channel, the Dunya News, proposed legislation to remove the death penalty from Section 295 (C) (the Blasphemy Law) of Pakistan Penal Code (PPC), which says “Use of derogatory remarks, etc., in respect of the Holy Prophet: Whoever by words, either spoken or written, or by visible representation or by any imputation, innuendo, or insinuation, directly or indirectly, defiles the sacred name of the Holy Prophet Muhammad (peace be upon him) shall be punished with death, or imprisonment for life, and shall also be liable to fine”.

Mrs. Rehman has been a critic of the controversial laws, which have been widely condemned by rights organizations and deemed discriminatory. In November, 2010, Rehman submitted a bill to parliament seeking to reform the blasphemy laws and an end to capital punishment. Rehman has since faced death threats from Islamist militants. She dropped her efforts after facing resistance from her own party.

Mr. Faheem Akhtar Gill tried to lodge a case against Mrs. Rehman for committing blasphemy with the police. When, initially the police refused to accept the case he filed cases on different occasions in a session court and then finally in the High Court of Punjab where the honourable judges also rejected his plea to book Rehman. However the Supreme Court (SC) has taken up Gill’s petition against Rehman for regular hearing and asked the police to conduct enquiries into the charges of her having committing blasphemy and report back to the Supreme Court for regular hearing.

The continuance of the Supreme Court intervening in every complaint and investigation as long as it is motivated and against the ruling party in the Parliament is very alarming. By making its bias known in the orders and judgments so obvious, these orders become open to the question of their validity in law. The Constitution provides for the implementation of the judgments, orders and decrees passed by the Courts; but does it allow for the implementation of orders which may be null and void due to the profound bias and prejudice imbibed in them.

The law of blasphemy is already a very contentious and sensitive issue. Even if for a moment the interview given by Sherry Rehman to a TV Channel is taken up she did not utter any blasphemous statement. She had discussed a law and the streamlining of that particular law; every law requires a procedure to be adopted, especially if it is open to gross misuse, which is amply proven by the track record of how the blasphemy law was used by former military dictator, General Zia ul Haq, in silencing protests to his draconian policies. It is now being used by individuals to settle personal scores, to illegally appropriate property, etc. That law is a law enforced by a dictator. It is not a divine law. Are the Courts now going to give a divine status to a dictator? The latest order coming out of the Supreme Court adds a lot of substance to the criticism of the blasphemy law, that it was created for settling the political agenda of Zia ul Haq, and this is exactly what a retrogressive court of ultimate jurisdiction is proving.

The timing of the filing of the Petition and its acceptance for hearing becomes seriously important as it casts clouds over Pakistan’s diplomatic relationships with the international community.

As time draws near the transitory period of the transfer of powers through ballot, the nervousness in the hallways of the Constitution Avenue is increasing and the options for the Supreme Court are fast becoming limited in its attempts for the soft coup it denounces publicly but would love to lead.

The question must be asked as to whether the Supreme Court is biased against the ambassador of the USA or whether it is a personal crusade by the Court.

Please sign the On Line Petition calling on the authorities and Supreme Court of Pakistan to withdraw blasphemy charges against Mrs. Sherry Rehman, the ambassador to USA which is again an attempt to cast clouds over Pakistan’s diplomatic relationships. Please also urge the Parliament and legislators to immediately pass legislation to withdraw the death penalty from the Section 295 (C) of Pakistan Penal Code so that the misuse of the Blasphemy laws may be stopped. The use of blasphemy charges has become a good practice to restrict the freedom of expression and thinking of society which has now been used by the higher judiciary to deny the people their fundamental right of open discussion on the issues related to the misuse of laws by the fundamentalists.

« HONG KONG/PHILIPPINES: Dean Jose Manuel Diokno to host Rights Talk on “Civic Education during Martial Law in the Philippines and Beyond” at the University of Hong Kong on Wednesday, 30 January

INDIA: Put an immediate end to plans of inundating people without rehabilitating them  »