BANGLADESH: Thirteen elderly including widows facing lack of food and health care in the Gaibandha District

The Asian Human Rights Commission (AHRC) has received information from the Right to Life Foundation working in Northern Bangladesh that more than 13 elderly including widows are facing a very serious situation. In the Gaibandha district, there is increasing insecurity due to a lack of food and healthcare. The AHRC has reported this year (HAG-002-2010, HAG-003-2010) on the distress of these villagers. Social security benefits have been provided by the administration, but only for some of those persons mentioned by the AHRC report. Many of the other villagers who are entitled to benefits under the various social security programs are still suffering due to the prevalence of corruption. It is time for the government to fully implement these programs for the poor and interrupt the corruption process.

Thirteen elderly including widows, aged from 65 to 93 years, suffer from lack of food and health care in three villages; Purba Bidddanath, Khamar Baluya and Ghorabandha village of the Gaibandha district. None of them have ever had a regular source of income in their entire lives. And after their children separated from their families, more difficulties have arisen. From time to time, they get some support from their children, which is not sufficient to provide food on a daily basis. The social security programs for the elderly and widows fail to reach them despite the fact that they are entitled to them. As a result they are forced into begging. A prevalent climate of corruption exists among public servants and public representatives. This is the main obstacle in providing those programs for the poor elderly. There does not appear to be a strong willingness on the part of the government to rid itself of the corruption in order to eradicate the hunger and extreme poverty in Bangladesh.

Hasena Beowa, 62 years old, wife of the late Jalil Mia lives in Ghorabandha (Jhakuyapara) village, Post-Charerhat, Monohorpur Union, under the Palashbari police station. She was left alone 22 years ago when her husband died. Without any source of income, she was not able to educate her two sons and a daughter. The Dowry system traditionally practiced in society drove her to an even poorer situation as she had to pay BDK 4,000 (USD 58) for her daughter’s marriage. Her eldest son, Md. Jahurul Islam (25 years old) and her second son Md. Hasen (16 years old), follow the same life pattern as their father. They live by depending only on daily labour. They all are facing hunger and food insecurity.

Hasena was getting weaker with rheumatic and joint pains. She tried to get treatment but failed since she could not afford the medical fees at the government health institutions. There is no free care for the poor and she does not get any benefits from the government social security programs. Rather the Union Council chairperson and another member demanded BDK 3000 (USD 43) as a bribe before they would issue her with the widow’s pension card. This situation arose when she approached them asking for redress. She could not manage to pay for the bribe and suffers from lack of food and health care, without any hope of survival.

Many of the villagers are landless though economically depending on agriculture. Most of the agricultural lands are occupied by a minority of landlords. The poor villagers work as rickshaw pullers, daily labourers and are even forced to go begging for food. The children are also malnourished, but the administration has not paid any attention to them.

In another village, Purba Baiddanath, three elderly including one widow were found suffering from lack of food and health care as the administration did not provide them with any support. Jamila Khatun, a 67 year old-widow, wife of the late Shahjahan Mia lives in Purba Baiddanath village, Sonaray Union, under the jurisdiction of the Sundarganj police station. After getting sick and having no children, she depends on her nephew’s family. She too, has requested the Union Council Chairman Mr. Jakir Hossain to provide some food relief and medical treatment, which has not been forthcoming as yet. Mr. Nur Mohammad Mia (73 years old) and Mr. Md. Tamir Uddin (65 years old) were also asked to pay bribes of BDK 4000 (USD 58) to get relief cards from the Union Council. According to the field report, 30 percent of the children are malnourished in this village. 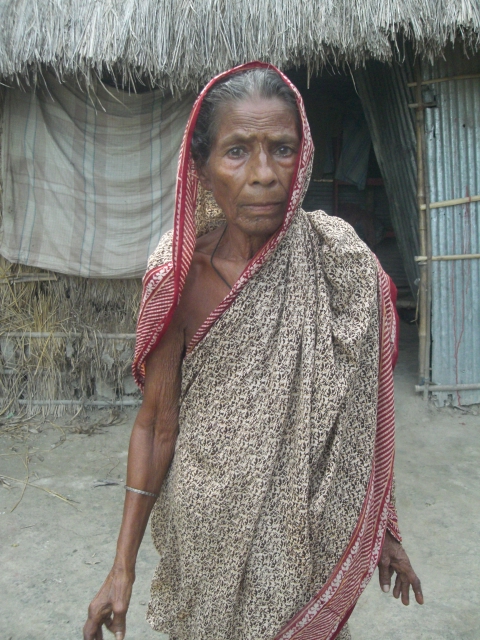 All of them are landless and currently do not have any source of income to buy food and of necessity must go begging. The village has no community clinic. It is a common occurrence in this village that the poor have to pay bribes for their rightfully entitled government support through the Old Age Allowance and the Widow Allowance schemes.( AHRCPhoto: Saleha Beowa, widow)

Bangladesh is a low-income country where 36% of the people live below the poverty line. Eight million are elderly persons, 60 years and above (Bangladesh Bureau of Statistics, 2006).The total allocation for old age allowance is 0.03% of the gross-domestic product (Help Age International, 2008).

Under the social welfare scheme, the Bangladesh government has a number of programs for the elderly. One such is the National Policy for the Elderly, 2006, purportedly a safeguard for the protection of the elderly. The Constitution of Bangladesh, introduced in 1997, clearly declares in article 15(D) that the Government should introduce social security programmes for the insolvent elderly population.

The Old-age Allowance Program has initiated a social security process for the old-age people. Relief cards for the poor are provided by the Bangladesh government through the local Union councils. However, these cards consistently fail to reach the beneficiaries due to corrupt officials who are in violation of the right to food and health for the poor in Bangladesh.

Please write a letter to express your deep concern about the bribery and the food and health insecurity of the elderly and widows in northern Bangladesh. The AHRC has written a separate letter to the UN Special Rapporteurs on the right to adequate food and on the right to health respectively calling for intervention in this case.

BANGLADESH: Call for immediate redress for the elderly and the widows facing food and health insecurity due to corruption

Name of the elderly and the widows whose rights are denied:

I am writing to express my concern that many elderly and widows are still facing food and health insecurity in the Gahibhanda district.

I am informed that 13 elderly and widows in three villages - Ghorabandha (Jhakuyapara), Purba Baiddanath, and Khamar Baluya - of Gahibhanda district suffer from lack of food and healthcare. They are being deprived of their right to food and health care by the administration, who has the duty of care in law to fairly administer the social security schemes of the Old Age Allowance and Widow Allowance.

It has been reported by the Asian Human Rights Commission (AHRC) that many elderly, including widows, were asked to pay a bribe to the Union Council staff in order to obtain cards for the schemes they are entitled to. Although some were provided with cards after a complaint was made, many have not. I am of the opinion that it is time for the government to conduct a proper survey to identify the beneficiaries in all villages of the Gahibhanda district in collaboration with human rights groups. To be credible to the public the government must put more effort into being transparent instead of facilitating corruption.

As previous hunger alert cases as well as this case show, the elderly and the widows have been living in extreme poverty for decades. With no regular source of income such as land or regular employment, they have been dependent on agricultural labour, rickshaw pulling, or casual daily labour to support their children and other family members. Their children who could not get a proper education due to their poverty are still living in a continuous cycle of poverty even after they became adults. Because they are also landless, depending on daily labour as did their parents they cannot support their parents.

In these three villages reported in this case, many depend economically on agriculture. And, a minority of landlords occupy the land. I am of the opinion that this feudal economic system is the main cause of food insecurity and hunger in the villages. Under these circumstances, the social security schemes play a significant role in protecting the right to food and health of the poor elderly and the widows.

Corrupt public servants who are relevant in providing social security schemes have abused their power by depriving the rights of the elderly and widows. All these 13 villagers were asked to pay bribes to get relief cards. They were denied if they could not afford to pay. These corrupt officials drive the disadvantaged to go begging, contributing to the ever increasing hunger and poverty in Bangladesh.

I therefore, urge you to provide immediate redress for all 13 elderly and widows in this case. Furthermore, the government should initiate a plan to identify the correct beneficiaries of all villages of Gahibhabda district and provide the social security schemes for them. More importantly, corruption needs to be stopped so that hunger and extreme poverty is eliminated and society can move and develop.

The government should bear in mind that it is duty-bound to respect, protect and fulfill the rights to food and healthcare, and to achieve the Millennium Development Goals (MDGs). I am aware that Bangladesh has the highest malnutrition and poverty index in Asia.

I will continuously monitor this situation and I look forward to your prompt response.

Government of the People's Republic of Bangladesh

Office of the Prime Minister

Ministry of Health and Family Welfare

Office of the Deputy Commissioner

Office of the district Social Welfare

« NEPAL: A man dies under questionable circumstances in police custody in Chitwan District and no investigation is conducted.