The Asian Human Rights Commission (AHRC) wishes to forward an urgent appeal from the Holland-based The Clean Clothes Campaign, urging the Thai government to release lawyer Mr. Somyot Pruksakasemsuk. He was arrested under the emergency decree on 24 May 2010 and is being held in solitary detention. Any extension of this detention would violate international human rights standards and national judicial law and there are serious concerns for his health and security. 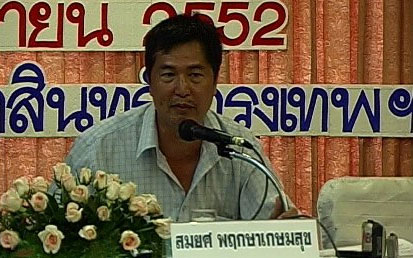 Please contact the Thai authorities today and ask the immediate release of Somyot Pruksakasemsuk. The well-known Thai labour- and human-rights advocate has been arrested following the recent political upheaval in Thailand.

He has been held in military barracks without getting charged since May 24th. The CCC and others are seriously concerned about his health and safety.
Take action now! >>

The Clean Clothes Campaign is shocked and angered by the arrest of Somyot Pruksakasemsuk. Somyot is founder of the Center for Labour and International Solidarity Thailand (CLIST) and worked with the CCC on numerous campaigns and Urgent Appeals, including the landmark Eden case in the mid-nineties and more recently the MSP case in 2006.

Somyot is a former project coordinator for ICEM (International Federation of Chemical, Energy, Mine and General Workers’ Unions) in Thailand. The CCC joins ICEM in calling upon partners and supporters around the world to write to the Thai prime minister and to Thai embassies in your countries to call for his immediate release.

Somyot was arrested together with Associate Professor Suthachai Yimprasert, after they presented themselves to the police when they heard of their arrest warrants. Suthachai was released yesterday following petitions by students and the faculty.

Although they had been following events closely in their capacity as journalists and academics, neither of them are members of the Red Shirt core group.

According to the latest information we received, Somyot is being held at Adisorn Army Base in Saraburi, 115km North of the capital Bangkok, and will be detained until at least 6 June. We understand that the Criminal Court agreed with the Centre for Resolution of the Emergency Situation (CRES) on Friday the 28th to extend the detention of Somyot for another seven days, and that in violation of international human rights standards and national judicial law, no charges were pressed against them, and no proper inquiry session has been arranged during his detention.

We understand that Somyot is held in solitary detention and made to wear military clothing. We are seriously concerned for his health and safety.
Please contact the Thai authorities today.

I write to respectfully ask you for the immediate release of Somyot Pruksakasemsuk. We understand that he is currently being held at Adisorn Army Base in Saraburi.

We know Mr. Pruksakasemsuk through his work for the international labour movement. We have come to know him as a loyal Thai citizen who has a passionate belief in Human Rights. He is very well known and respected internationally. Mr. Pruksakasemsuk is a journalist and academic promoting freedom of speech and was not part of the core leadership of the “red shirts”.

Mr. Pruksakasemsuk was arrested together with Dr. Suthachai Yimprasert, Associate Professor at Chulalongkom University, who has recently been released. Both men surrendered to the CRES when they heard that warrants were out for their arrest. The warrants were issued in regard to the incident on 21 May 2010 at 13.00, when Mr. Pruksakasemsuk and Dr. Yimprasert, in the name of the 24th of June Democracy Group, held a press conference in front of the House No. 111 Foundation. This was a peaceful event.

We understand that the Criminal Court agreed with the Centre for Resolution of the Emergency Situation (CRES) on Friday to extend the detention of Mr. Pruksakasemsuk for another seven days, and that no charges were pressed against him, and no inquiry session had been arranged during his detention, which we believe to be a violation of international human rights standards.

We sincerely hope you will comply with our request and ensure his immediate release, and kindly ask you to inform us about your actions in this matter at the earliest possibly opportunity,

On 24 May 2010, Mr. Somyot has been detained under Emergency Decree which has declared for Bangkok and Neighbor provinces since May 24. The first extension to continue detention has been permitted by Criminal Court on May 30. The next period will be finished on June 4 when the authority has to apply to court to extend detention.

Under the Emergency Decree section 12 “The suspect person shall be detained for not exceeding 7 days. In case where it is necessary to continue detention in order to remedy the emergency situation, the competent official shall apply for the leave of the court to extend such detention period by 7 days at a time, provided that the total period shall not exceed 30 days.”

The Thai Government has declared Emergency Decree for Bangkok and Neighbor Provinces on 7 April 2010 after the Red-Shirted has held demonstration in Bangkok on March 2010. The declaration will be finished within 3 months, regarding to the Emergency Decree section 5, paragraph 2.

Further, the Emergency Decree has been regulated on 2005 by former Prime Minister Thanksin Chinawatra. The first declaration has been in Southern Thailand since 2005. See more information on Emergency Decree in the South here