Home / News / PHILIPPINES: Solidarity for the Manobo people’s struggle for the protection of land rights, self-determination, and the environment

PHILIPPINES: Solidarity for the Manobo people’s struggle for the protection of land rights, self-determination, and the environment

The Asian Human Rights Commission (AHRC) wishes to forward an appeal from the Kalikasan People’s Network for the Environment, Karapatan Alliance for Advancement for People’s Rights and the Kalipunan ng Katutubong Mamamayan ng Pilipinas regarding the two decade long struggle by the Manobo people who are facing worse attacks against their right to life, self determination, and human dignity.

PHILIPPINES: Solidarity for the Manobo people’s struggle for the protection of land rights, self-determination, and the environment 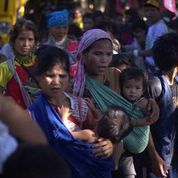 The Pantaron Range is a mountainous area that contains one of the last remaining primary forests in Mindanao, a part of our few remaining biodiversity corridors, and is a critical watershed for major river systems such as the Pulangi, Lasang and Davao rivers. It is ancestral home to thousands of Talaingod Manobo indigenous people, Lumads who gallantly defended Pantaron from big logging firm Alcantara and Sons (also known as Alson’s) in the 1990’s by organizing themselves into the Manobo federation, Salugpungan Ta Tanu Igkanugon (Unity in Defense of Ancestral Land; or, literally, ‘a gathering {salugpong}for a land {tanu} that cannot-be-alienated [from us] {kanugon}’).

In 1993, Datu Guibang Apoga, the chieftain of the Talaingod Manobos, united 83 different Manobo villages to rise against Alson’s and led a pangayaw, or a tribal declaration of war in defense of their lands, using traditional weapons against the company and its private security. The Pantaron struggle forced Alson’s to leave the area, thus preserving to date the flora and fauna of the Pantaron Range.

The Talaingod Manobos were forced on an exodus to Davao City away from their ancestral homes by a series of aerial bombings and intensified militarization by the combined forces of the 68th Infantry Battalion of the Philippine Army (IBPA), 60th IBPA of the 1003rd Brigade, and the 4th Special Forces under the Armed Forces of the Philippines (AFP), which started on March 3, 2014.

Evacuees reached 1,353 individuals (as of April 4), 927 are in Davao City while 426 are staying in Nasilaban. Of the 927 evacuees in Davao, 515 are children, from newborn to 12 years old. The number of evacuees who are currently trapped in the interior areas are still unknown. Traditionally, to evade military atrocities, Manobos go to the forests where some of them die due to starvation.

On March 10, an elderly Manobo woman, Ubunay Botod Manlaon, was subject to humiliating treatment and sexual abuse, and was used as a guide for military operations by the military. The military stripped her of her clothes, her hands and feet were bound, and treated her like an animal as they fed her scraps. At night when they made camp, they left her out in the cold and rain. She was eventually able to escape but not before being psychologically and physically traumatized.

On 15 March, the military arrived in the village of Nalubas, where they halted a group of children and their parents on their way to the neighboring village of Palungan.  The group, with 13 pupils and three parents, were led by village leader Tungig Mansimuy-at and teacher Roilan Licayan. They were on their way to Palungan to gather food for the school’s upcoming recognition rites.  The group was divided into groups and interrogated separately, their pictures taken against their will.  Their ordeal did not end right away for the military insisted upon accompanying them all the way to Palungan, and, as they were headed back, were interrogated again by another group of soldiers they encountered on the trail, and were only released after one hour.

On 20 March, the villages of Bagang and Laslasakan in Barangay Palma Gil were aerially bombed; this was seen by several witnesses.  Over the next two days there were incidents of strafing, of indiscriminate firing that resulted in the miscarriage of a young woman, and of threats against lumad villagers.

By 27 March, those from the interior villages of Pangaan, Nalubas, Pongpong,Bayabas and Bugni begin their trek down to the lower village of Laslasakan.  Their situation in their respective communities had become unbearable as soldiers, camped right in the middle of civilian settlements, subjected them to intimidation, threatening accusations, and prevented them from going to their farms for their everyday subsistence.

On April 2, as the Talaingod Manobos were fleeing the wrath and violence of the military’s guns and bombs, 12 – day – old Biboy Manabay passed away. Biboy died of pulmonary aspiration, secondary to dehydration as the villagers of Sitio Laslasakan, together with evacuees from other interior villages, started their exodus for sanctuary. After a seven (7) hour trek from his home in Laslasakan, without any food and water, under the glaring heat of the sun, Biboy’s fragile health did not make it. He passed away and was buried in Sitio Igang, halfway through the evacuation site.

Basilio Libayao, current mayor of Talaingod, is likewise a party to the wholesale cover-up of the atrocities against the Manobos, when he threatened to file charges against community organizers who ‘influenced’ the Manobo communities of Brgy. Palma Gil, Talaingod town, Davao del Norte to leave their homes.

In the early ‘90s, Alsons applied for an expansion of its operations from 19,000 to 45,000 has. of land that is basically the whole of Talaingod. Jose Libayao facilitated Alson’s entry to and control of the Ata-Manobo’s resource rich ancestral lands by signing an agreement that placed Talaingod under Alson’s Integrated Forest Management Agreement.

When the indigenous peoples resisted the incursion, the military-backed Jose Libayao went on a killing spree against the opposing Ata-Manobo. In February 1994, three truckloads of soldiers from the 64th IB-PA attacked the “anti-IFMA” villages. Many Lumads fled their communities as troops burned down houses, looted harvests and slaughtered livestock.

The climate of impunity in the Philippines:
Four years into the presidency of Benigno S. Aquino III, the situation has become more dangerous for indigenous and rural communities, with the implementation of the administration’s counter-insurgency program Oplan Bayanihan. Instead of promoting peace, Aquino’s militarist machinations have resulted in more violence.  Instead of upholding people’s welfare, Aquino and his state security forces have trampled upon people’s rights.

From July 2010 to March 2014, Karapatan has documented 192 individual victims of extrajudicial killing, majority of them are farmers, indigenous and environmental rights defenders. Nearly 40,000 people have been internally displaced, more than 9,500 people have been indiscriminately fired at, and 134,110 individuals have been affected by the use of schools, homes, hospitals, and places of worship for military purposes.

For Mindanao, Oplan Bayanihan’s direct effect has been the deployment of five divisions of the Armed Forces of the Philippines in the island, an estimated 60% of the entire AFP.  The AFP top brass has admitted that the concentration of their troops will be in the Davao region, where they have been carrying out operations. These are the same towns and villages that have reported numerous human rights violations.

Our appeal:
More than two decades after the attempt to encroach on their ancestral lands, the Manobo people are facing worse attacks against their right to life, self determination, and human dignity.

The Defend Talaingod, Save Pantaron Range Alliance was recently formed to support the Manobos’ exodus with solidarity, relief, and lobbying for justice. The people’s movement successfully negotiated with local governments last April 29 for the withdrawal of the AFP from Talaingod. However, military officials in their public statements said that it will only a temporary pull-out, as they need to continue their supposed military operations against the NPA.

Thus, the Manobos of Pantaron Range need our solidarity and support, now more than ever. We appeal for your support for the people of Talaingod by:

1) Writing letters of appeal addressed to the Philippine authorities (list attached) and statements of support to the Talaingod Manobos to:

Ensure the pull-out of all military troops in their communities;

Investigate, prosecute and hold accountable those who have perpetrated the various rights violations against the indigenous communities;

Provide just reparations made by the perpetrators for any damaged home, source and means of livelihood of the people;

Stop the attacks against schools and children;

2. Supporting the filing of complaints by the Salugpungan Ta Tanu Igkanugon and Defend Talaingod, Save Pantaron Range Alliance by donating financial support for the legal fees, lobbying and advocacy activities at the Commission on Human Rights, Philippines Congress, and at the United Nations.

3. Hosting lobbying engagements and audiences in the UN and other international platforms in order to bring to international attention the plight and struggle of the Manobo people.

4. Supporting the plight of the returning evacuees who are still in need of food, medicines, blankets and other materials.

Please contact the following organisations for queries and other information you may need:

1) Kalikasan People’s Network for the Environment: through kalikasan.pne@gmail.com;

2) Karapatan Alliance for Advancement for People’s Rights: through karapatan@karapatan.org;

SRI LANKA: G Piyal Sanjeewa Perera – being beaten up and tortured at this moment at the Panadura Police Station »