Home / News / INDIA: Custodial deaths and torture by police must end in Meghalaya

INDIA: Custodial deaths and torture by police must end in Meghalaya

The Civil Society Women’s Organisation (CSWO), an anti-corruption and women’s rights organization, Shillong, is deeply concerned of recent incidents of torture by police often leading deaths including other similar human rights violations in Garo Hills, Meghalaya. Ordinary people are often helpless in the hands of such criminalized policing in the state. CSWO has been reporting the incidents from time to time demanding investigation and justice for the victims.

Recently CSWO is informed that the Police of South Garo Hills have tortured a youth named Mr. Tochang Sangma who was arrested on the 24th May 2014 and remanded for 10 days police custody at Chokpot, South Garo Hills district of Meghalaya. He was taken to Baghmara Police station the following day. CSWO has received information that he has been beaten up mercilessly and was hospitalized as he sustained internal injuries. He was vomiting and urinating blood. He was again ‘suspected’ of having links with a group United A’chik Liberation Army UALA. His Bolero vehicle was seized by the Police without issuing any seizure list and they are using this vehicle illegally without informing the authorities.

Parents of Tochang informed that he is losing his memory due to torture by the police and also unable to breathe properly. Now he is hospitalized in the Tura Civil hospital but still handcuffed and tied to his bed.

This inhuman act of torture by police is continuing and the government is condoning torture which is a gross human right violation and is highly condemned by CSWO. Immediate action is demanded from the authority to restore right to life and liberty of Tochang Sangma.

The CSWO is concerned at the high frequency of arbitrary arrests on suspicion leading to torture, maiming, and death of people who are unlawfully detained or picked up in the state. One of the prime principles of criminal justice that holds an individual innocent till proved guilty is hardly followed by police personnels. Police plays the role of judge and jury for any person accused of a crime without giving any right to defend themselves. Police cannot have the right to pronounce punishments as it is not their duty. 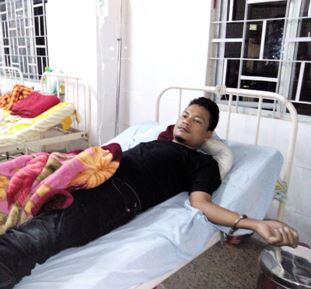 It has been observed by CSWO that to collect evidence, police use force and methods of torture while they ignore complaints based on information obtained under right to information applications as it proves widespread corruption. Also in the name of investigation, police use verbal and nonverbal threats and torture for confessions for crimes they never committed. Police also threaten to harass by piling more cases on those who complain as observed in many cases.

Recently Mr. Balsan Marak, 18 years old youth died in custody in Tura on May 20.  Again on May 28, another person Mr. Witson M Sangma died in police custody at Chokpot of South Garo Hills and police claims that he died of hyper tension. Given the recent trend of custodial deaths in the state, it can be concluded that this claim is to cover up the evidences and to get away with murder.

The CSWO will file appeals to the Meghalaya High Court requesting sou motu cognizance of human rights violations by men in uniform and to call for a time bound CBI inquiry, so that the police force is made accountable. This will help in cleaning up the criminal justice system ensuring human dignity and right to life. Police should not be above the law. Rule of Law must prevail in law enforcement system as well.

« PAKISTAN: Media Freedom under attack by Pakistan’s Government, the military and the judiciary