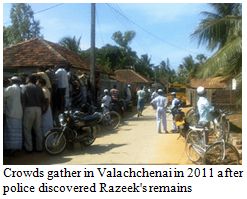 Pattani Razeek went missing in 2010 near a mosque in Polonuwara. His family received several calls from his mobile phone, demanding money in exchange for his release. Then the calls stopped.

For his son Razeek Rizkkhan Mohamed, the ensuing years have been a tedious process of waiting and suffering.

It was quickly established that Pattani, a rights activist and civil organizer, was abducted and later murdered. Police in Valachchenai in Eastern Province discovered his body and exhumed it in July 2011. But the investigation has made little progress since.

“After years of waiting we still have not obtained justice for my father,” Mohamad said.

He added that on February 11 this year – the anniversary of his father’s disappearance – the court hearing a case against a suspect allegedly involved was adjourned.

“The key suspect has been released on bail. We have lost all hope of justice,” he said.

The family, as well as former colleagues and fellow activists, have complained of long delays in the courts, police inaction in the investigation and the release of key suspects in the case, including Shahadbeen Nowshaad, who police had initially linked to Razeek through the ransom phone calls to the family.

Mala Liyanage, executive director of the Law and Society Trust, said legal and rights activists could no longer tolerate the mockery of justice committed by Sri Lankan authorities.

“We are going to raise the matter with the Sri Lankan Human Rights Commission and with the special envoy of the state president for the already neglected justice for this human rights defender,” Liyanage said.

Just before Razeek’s body was discovered, a rights group, the Sri Lankan Civil Society Activists, issued a statement signed by activists, bishops, priests and other religious leaders, calling on the government to launch a full and transparent investigation into Razeek’s disappearance.

At the time of his disappearance, Razeek was a much-loved and widely known rights advocate.  He had served as the managing trustee of the Community Trust Fund as well as an executive committee member of the rights group Forum-Asia.

“He worked tirelessly at the time of the last tsunami debacle (in 2004), assisting the victims,” said Udaya Kalupathirana, a coordinator with the Human Rights Defenders Program.

“Even after three years of neglect, it is high time to carry out an impartial credible investigation and prosecute the perpetrators of this crime,” he added.

Ruki Fernando, a rights activist and friend of the Razeek family, said that police have not even issued a death certificate for Razeek in the 18 months since his remains were discovered.

Even the eight-member commission of inquiry appointed by President Mahinda Rajapaksa following the end of the civil war concluded in its report that police had failed in their handling of the case.

Fernando added that other rights activists continue to live in fear of a similar fate.

“There has been no effort to address threats and intimidation against local community leaders trying to campaign for justice,” he said.