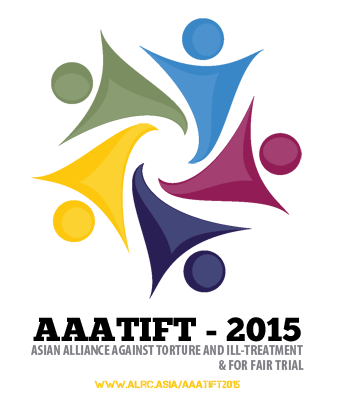 (Hong Kong, October 02, 2015) The 4th Asian Alliance against Torture and Ill-treatment & for Fair Trial – Conference of Asian Parliamentarians will be held from 5 to 7 October, 2015 in Hong Kong. The 4th conference will seek means to advance the agreement arrived at during the past three conferences, to further seek political consensus, and a firm commitment of adequate resources for justice institution reforms to end the practice of custodial torture in Asia.

“Endemic torture in Asia portrays how medieval and underdeveloped are justice institutions in Asia. That there are only three countries in Asia that has criminalised the practice proves that even today prevention of torture is not state policy…” said Mr. Basil Fernando, Director – Policies and Programmes of the Asian Legal Resource Centre, in Hong Kong (ALRC).

“Torture negates the foundations of fair trial. Often law-enforcement agencies resort to torture since it is the only tool they have at their disposal to investigate crimes. Said this, we (ALRC) have also documented hundreds of cases where torture is used for extortion of bribes and to silence the people.” Mr. Fernando added.

In Asia, state agencies use torture, in some of its worst forms, against civilians in the excuse of combating terrorism. Countries like Pakistan allow its agencies to engage in widespread torture, for which persons are held incommunicado, in secret detention centres, and are tortured for weeks. The ALRC has documented cases from Pakistan where dead bodies are discarded in isolated locations by these agencies once the person they have taken into illegal custody dies whilst in detention.

Across Asia, justice institutions receive the last priority in government budgets. Often paltry sums are allocated for the day-to-day running of the justice institutions, most importantly the police, prosecution and the judiciary. This, when translated into practice means lack of adequate resources for the institutions to function, and long periods of delays in adjudication. In countries like Sri Lanka and India for instance, court procedures could take decades to complete. Such delays have resulted in the loss of trust of the people in their justice institutions.

“Meaningful engagement to reform the justice framework in Asia requires a firm commitment by Asian governments to provide adequate resources that are required to undertake this process…” “Some political leaders in the region have expressed this concern which I shared. We hope to achieve a consensus through conferences like this, from Asian parliamentarians and their governments, on this subject…” Mr. Fernando said.

Parliamentarians, former ministers, civil society leaders and bureaucrats representing Asian states will attend the conference. The conference is jointly organised by the ALRC, and DIGNITY Institute an international organisation based in Denmark, and is held at Hotel Metro Park, Kowloon, Hong Kong.

The Asian Legal Resource Centre (ALRC) works towards the radical rethinking & fundamental redesigning of justice institutions in Asia, to ensure relief and redress for victims of human rights violations, as per Common Article 2 of the International Conventions. Sister organisation to the Asian Human Rights Commission, the ALRC is based in Hong Kong & holds general consultative status with the Economic & Social Council of the United Nations.

PAKISTAN: Christians were held under anti terrorism law for using the word ‘Sainthood’ »