An Announcement by the Asian Legal Resource Centre 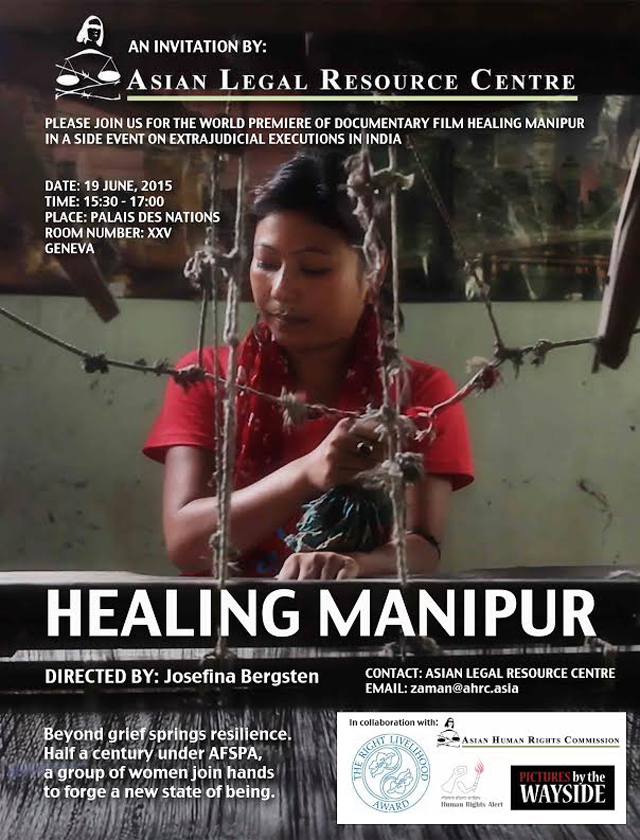 The Asian Legal Resource Centre (ALRC) invites you to a parallel event on ‘Extrajudicial Executions in India’ that will include the world premiere of Healing Manipur, a documentary film on the effects of an Indian law, The Armed Forces (Special Powers) Act, 1958. The documentary centers on the lives of women in the Manipur state of India who have either been widowed or who have lost children due to the application of this law. These women have come together to form an association, the Extrajudicial Execution Victims Families Association, Manipur (EEVFAM). The documentary portrays the struggle of EEVFAM mothers seeking to find renewed meaning and purpose; it showcases the courage of the women, who are trying to heal from the trauma caused by the murder of a loved one. The purpose of screening the documentary at the UN is to encourage women across the world facing similar situations to find means to recover from trauma, to build a solidarity network of women survivors to work towards ending such violence, and to encourage them to seek legitimate justice processes to redress grievances, as the EEVFAM has sought to do in India.

1. Ms. Josefina Bergsten, Documentary Director & Consultant, ALRC, HK, will speak about the filmmaking process, and her interactions with the resilient mothers;

2. Ms. Takhellambam Renubala Devi, President, EEVFAM, Manipur, will speak about the challenges she continues to face in seeking redress for the extrajudicial execution of her husband;

3. Ms. Sadokpam Ranjeeta Devi, Member, Human Rights Alert (HRA), Manipur, who has played a significant role in bringing the women together will shed light on the collective effort to seek justice;

About the ALRC: The Asian Legal Resource Centre is an independent regional non-governmental organisation holding general consultative status with the Economic and Social Council of the United Nations. It is the sister organisation of the Asian Human Rights Commission. The Hong Kong-based group seeks to strengthen and encourage positive action on legal and human rights issues at the local and national levels throughout Asia.

PAKISTAN: Call to save the life of Asia Bibi, who is suffering from intestinal bleeding »