PAKISTAN: Journalists are threatened for reporting the rape case of a six years old Hindu girl 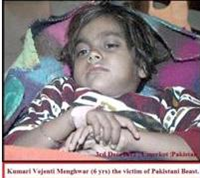 In the case of the rape of the six-year-old Hindu girl, Vijanti Meghwar, a student of class one, the perpetrators have threatened the journalists with death for reporting the follow up of the case. The inhuman and tragic incident took place on December 4, 2012 in Ghulam Nabi Shah village of Umer Kot district, Sindh province, a very remote and backward desert area along the Indian border. Vijanti a resident of Meghwar Mohalla Ghulam Nabi Shah, Taluka Pithoro District Umerkot was raped and tortured. She was found unconscious lying in a street. Vejanti belongs to a poor family and the Meghwar community (Meghwar is among the low/schedule caste of the Hindus).

The two prominent journalists of the area, Mr. Arbab Bheel of Dharti TV and Mr. Mushtaq Qamber of Daily Sindh Express, have been threatened by the main accused, Mr. Muhammad Mangrio, the brother-in-law of former Town Nazim (chairman) of Tehsil and his nephew Mr. Mashooq Mangrio, who told them over the telephone and conveyed through their henchmen that if they come to the place, the Ghulam Nabi Village, for further reporting they would be killed. The Superintendent of Police of the area, Mr. Riaz Soomro, the brother of the provincial law minister, Mr. Ayaz Soomro, has refused to help the journalists and is providing protection to the perpetrator and his henchmen as they are the political workers of PML-F, who has very close links with the military and its head is a spiritual leader, Pir Saheb Pagaro, who is the most powerful personality of the province and has armed groups.

It is shameful that the President of Pakistan, Mr Asif Zardari has taken notice of the case from the very day of the incident. However, the provincial authorities have ignored the orders of the president for their political expediency to obtain benefits out of the case. The chairman of the ruling party, Mr. Bilawal Bhutto has also condemned the persecution of religious minorities in Pakistan and urged for the commitment to protect their lives and livelihood. But the result is different and the six year old victim is lying in the hospital without proper medical treatment.

The civil society, concerned citizens, women organisations and journalists under the leadership of Association for Water Applied Education & Renewable Energy, (AWARE) are holding protests and are also on hunger strike outside the press club of district Mirpukhas. The Superintendent of Police (SP) has threatened the journalists and activists that if they do not call off the hunger strike they would be dealt with severely. Members of the opposition parties and nationalist groups visited the hospital and demanded the government to take immediate action and manage special treatment of the girl who is still under observation.

It is to be condemned that none of any parliamentarians belonging to the Hindu community and especially from the Thar area have so far appeared to enquire about the case. Verbal orders have been given to police to arrest the culprit and his supporters but nothing has happened so far.  There are members of parliament and two provincial ministers from the ruling party who are from the area where three districts meet but they have not visited or inquired about the health of the girl as she belongs to the Hindu community.

The relatives of Vijanti are grief stricken and confused because they are also under pressure (politically and administratively) from political parties and the authorities.
The persecution of religious minorities in Pakistan is an old story; violence and atrocities against the non-Muslim population of Sindh has continued for many years but the people belonging to so-called ‘untouchables’ like Meghwar, Kolhi, Bheel and Bagri are treated worst than animals. Kidnapping of their girls and sexually assaulting their innocent children has crossed all bounds of humanity because the majority of these communities are from the working class.

Continuous crime and human rights violations against Hindus and other religious minorities suggest that there is a lack of political will on the part of present ruling party to protect the citizens. A fresh wave of attacks on temples, graveyards, properties and lives of the minorities are an attack on the Jinnah’s vision of Pakistan and pose an existential threat to the country.

Bilawal Bhutto further said “Our forefathers did not give their lives for an intolerant, extremist, sectarian and authoritarian Pakistan. I appeal you to rise up to defend Jinnah’s Pakistan. I and my party will stand by you, shoulder to shoulder”. If he really means it then he should act. Indeed, the actions of the government should be seen because actions speak louder than the words.

The Asian Human Rights Commission urges the president and Chief Justice of Pakistan to appoint a judicial commission to probe the incident of the rape of the six-year-old Hindu girl and provide all medical facilities to the victim and assistance to her family. The Chief Justice, who is famous for taking Sou Moto action on political events, must also pay serious attention to the persecution of religious minorities groups including the molestation of their children and their forced conversion to Islam. The government must also provide protection to the journalists mentioned above and prosecute the perpetrators regardless of their standing in society.

SRI LANKA: The fight against reducing the judiciary to a government stooge  »