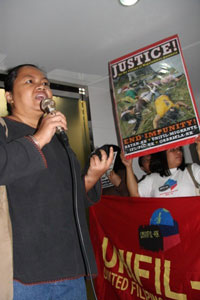 After the country’s democracy was restored 23 years ago, the days where the police and military were ruling over the civilian authority were deeply felt again, most notably by the citizens of Maguindanao, a province in southern Philippines, after it was placed under martial law by Proclamation No 1959 last Friday, December 4.

The scenario of arrests, detentions and searches made without court orders–a common practice during the late president Ferdinand Marcos’s martial rule–unfolded during the police and military operation against those involved in the Maguindanao massacre. The fundamental principles of legality and due process have been abandoned, with security forces having unprecedented powers given by the head of state under this martial law.

Twenty eight years after Marcos’ martial rule ended, the notion of a military solution remains deeply embedded, not only amongst the security forces, but also within the civilian government. Martial rule and suspension of writ of habeas corpus, which allows warrantless arrests, detention and conduct of searches, have been a convenient solution for the police force’s incompetence in enforcing their rudimentary duties.

By giving the police and military unprecedented powers, Philippine President Gloria Macapagal-Arroyo has effectively compromised the fundamental rights of the people of Maguindanao, who have suffered from a decades-old protracted war in Mindanao. The police have become subservient to and have ceded police powers to the military. Under martial rule, the soldiers have cemented their de facto superiority over the police in conflict areas. 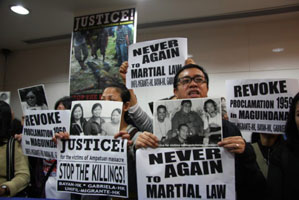 The Philippines has passed a number of landmark legislations in terms of legal protection for human rights in 2009, for example, the enactment of Anti-Torture Law in November 2009 and the Magna Carta for Women, a legislation which protects and upholds women’s rights, in August 2009. However, it also gained notoriety of being the place in which the highest number of journalists were killed in a single incident, according to Reporters Without Borders, following the massacre of 30 journalists on November 23 in Maguindanao. The massacre has put the number of journalists murdered since democracy was restored in 1986 to 109. 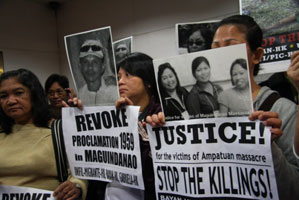 The number of cases of extra-judicial killings that have resulted in prosecution and conviction of the perpetrators is nil. The widespread impunity of security forces has its roots in systemic defects in the country’s system of justice. Perpetrators and criminals are committing crimes and getting away with these murders without fear of being prosecuted.

To illustrate this, on the occasion of International Human Rights Day, the AHRC published its 26-page annual report on the State of Human Rights in the Philippines today. The report demonstrates that the impunity of security forces and the lack of remedies for the worst forms of human rights violations was a product of the defects within the system of justice.

Please read the rest of the report by following this link: http://material.ahrchk.net/hrreport/2009/AHRC-SPR-007-2009-Philippines-HRReport2009.pdf

About the photos: Protest against Martial Law in Maguindanao at the Philippine Consulate in Hong Kong December 10, 2009/Photo by United Filipinos in Hong Kong

PAKISTAN: An army colonel has had four men abducted and tortured due to a personal dispute, in Pakistan-held Kashmir »