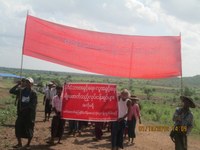 Much has been made in recent times of the continued use in Burma of antiquated and anti-human rights laws from the country’s decades of military rule, as well as from the colonial era. While legislators discuss the amendment or revocation of some laws, and the issue is debated in the public domain, much less is said of the superstructure of military-introduced administrative orders that officials around the country continue to employ in their day-to-day activities, invariably in order to circumscribe or deny human rights.

Among these orders are some being used to restrict or prevent access to land of people who rightfully occupy or cultivate the land, as in the case of villagers from some 26 villages affected by the copper mining project in the Letpadaung Mountain range in Sagaing Region, on which the Asian Human Rights Commission has previously spoken (AHRC-PRL-044-2012). The AHRC has obtained copies of a series of orders issued by Zaw Moe Aung, chief administrator of Sarlingyi Township, where villagers have been fighting since mid-2012 against the expansion of copper mining in the region onto their farmlands. The orders, issued under section 144 of the Criminal Procedure Code, prohibit villagers from access to their farmlands or any form of use of the farmlands, such as for the grazing of cattle. The latest orders expired at the end of October; however, people in the region expect that they will be renewed, or that in any event they will simply be denied access to their land, which is being taken over by an army-owned company and its partner.

In fact, under the Criminal Procedure Code, a judge, not an administrator, should issue these orders. However, in the orders issued in Sarlingyi, the administrator authenticates his action by stating that he is acting in accordance with Notification No. 2/89 of the Minister of Home Affairs, whereby the then-minister, an army general–as now–authorized the heads of administrative councils under the then-recently formed military regime to issue these orders instead of the courts.

At the time that the general made the notification in June 1989, Burma was under direct military rule. The army had taken control of all parts of the state apparatus. It was also just after the end of the one-party system in which all parts of government had anyhow been consolidated under the executive. However, now that Burma is under some form of constitutional government in which, according to the constitution, separation of powers should be practiced “to the extent possible”, what is the justification for the continued use of instruments like Notification No. 2/89? Why is this notification still operative? Why has the power to issue section 144 orders not been returned to the judiciary?

The difference between an administrator making an order to prevent the people in Letpadaung from going onto their lands and a judge making the same order is an important one. Where the judge makes an order, the people have rights not only to obtain copies of the order or orders, but also to go before the judge and make a submission according to judicial procedure for the order to be overturned or altered. Where an administrator in Burma makes such an order, they have no such avenue readily available to them. Therefore, the question of the power to issue orders of this sort, and others like them, is not a trivial one but is central to the nature of the state system in Burma, and goes to the heart of popular demands for the rule of law.

Two other aspects of the prohibitions placed on the villagers in Letpadaung deserve mention. First, the nature of a section-144 order is that it is supposed to be used only in unexpected emergency situations, not in routine administration, as is the case in Burma. The Supreme Court of India, where the same section is found in its Criminal Procedure Code, in 1970 explained this aspect of the section very clearly:

“The gist of action under s. 144 is the urgency of the situation, its efficacy in the likelihood of being able to prevent some harmful occurrences. As it is possible to act absolutely and even exparte it is obvious that the emergency must be sudden and the consequences sufficiently grave. Without it the exercise of power would have no justification. It is not an ordinary power flowing from administration but a power used in a judicial manner and which can stand further judicial scrutiny in the need for the exercise of the power, in its efficacy and in the extent of its application.” (Madhu Limaye vs Sub-Divisional Magistrate, 1971 AIR 2486)

In the case of the section’s application in Letpadaung, as in most other cases where it is used in Burma, it has been treated as an ordinary administrative measure, to prevent people from accessing lands taken over by an army-owned company and its partner. No emergency exists that is either sudden or grave to justify its usage, and yet, precisely because it is issued as an administrative order rather than a judicial one the villagers affected by the order lack the recourse that the judges in the 1970 case envisaged, that the order might be subject to further judicial scrutiny when applications are made against its issuance and continuance.

Second, on the point of continuance, under section 144, orders are supposed to be issued for a maximum of two months. The whole point of the orders is that they are temporary in nature. But in Letpadaung, the orders are being renewed repeatedly. Nor is this unusual. All around Burma, such orders are issued not only repeatedly but also as if once they take effect they remain in effect until revoked. However, this usage of the section is also completely contrary to its original conception, as again is made clear by the Supreme Court of India, in a ruling from 31 May 2011 [in Writ Petition (Criminal) No. 5000/2010] when it wrote that,

Although the abuse of such powers is common in India, which is why such matters come before the courts, citizens at least have access to the superior judiciary to seek intelligent, if not always reliable, interpretations of laws. The same cannot be said for Burma, where not only does the executive continue to exercise powers like those under section 144 by way of reference to instructions issued by preceding military regimes, but where the Supreme Court has so far failed to make any impact in the new political and social conditions of the country. Indeed, according to a statement made in the legislature by one member not long ago, so far not one of the hundreds of writ petitions lodged in the court in accordance with the 2008 Constitution has succeeded.

If the government of Burma is serious about its stated intentions to restore to the country the rule of law, which has been absent from it for at least the last half century or so, then among other steps it must revoke orders, including the Ministry of Home Affairs Notification No. 2/89, enabling administrative officers to exercise without accountability or oversight judicial powers that were never intended for them. The power to issue section 144 orders, and others like it, ought to be returned to the judiciary, and the people of Letpadaung, and others like them around the country, should be given the opportunity to contest the issuance of such powers by judges, in the courts. If the contest over rights of access to land returns to the courts, rather than remains in the hands of administrators, it may over time give the judiciary the strength that it needs to again stand up as an autonomous, if not fully independent institution, capable of contributing to the defence of human rights in Burma, rather than sitting silently on the sidelines, as in the present case, or being co-opted into administrators’ schemes to further undermine the rights that judges ought in fact be protecting. And in any event, the opportunity to contest an order issued in court will, irrespective of the outcome, already be an improvement on the current situation, in which administrators like Zaw Moe Aung continue to issue orders like fiats; orders against which villagers have no means of redress, other than to continue to take to their lands in protest, as they have been doing in Letpadaung for over four long months already.

« SRI LANKA: The final nail in the coffin of the judiciary