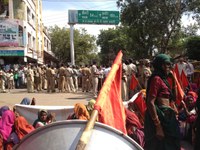 A protest rally organised today by the Jagrit Adivasi Dalit Sangathan (JADS) against corruption and non-distribution of wages under the Mahatma Gandhi National Rural Employment Guarantee Act (MGNREGA) in Badwani, Madhya Pradesh state is on the verge of being forcibly disbursed by the state police with the support of local politicians associated with the ruling political party in the state, the Bharatiya Janata Party (BJP). The JADS, a people’s organisation has been struggling to assure the wages due to the villagers under the MGNREGA since the enactment of the MNREGA. The JADS was the force behind the first successful and peaceful lobby work undertaken in India that secured villagers in the country for the first time, unemployment benefits under the MGNREGA.

An estimated 4000 persons are participating in the JADS rally organised today. The payments due to the villagers under the MGNREGA in the state have been delayed up to several months, and in some cases even payments from 2011 have not been made. The JADS have been organising a series of protests and has been demanding explanations from the government for the delay in payments. However, the state administration chose to ostracise the JADS and its staff members. In May this year the state administration issued a prohibitory order against the staff members of the JADS, preventing them from entering Badwani and six other neighbouring districts, which the JADS contested.

When the JADS demanded expenditure accounts of previous instalments, the government informed the JADS that the work-wise expenditure accounts are not maintained by the administration and that these will have to be collected from the panchayats and other agencies. On 25 August the government gave written assurance to the JADS that the expenditure details for 24 panchayats will be provided to the JADS by 1 September. This, of course was not done. Instead government officers along with village Sarpanchs and Sachivs carried out a “dharna” and held a rally, which was led by the Member of the State Legislative Assembly (MLA), Mr. Premsingh Patel (BJP). In the rally the government employees and the MLA declared that no accounts would be provided to the JADS and threatened that they would get the staff members of the JADS and the members of the general public who protests against the government would be arrested.

The protest meet organised by the government employees with the support of the ruling political party underlines the fact that the money due to the poor villagers under the MGNREGA is siphoned off by corrupt politicians and the bureaucracy. This singular act is nothing less than organised robbery by the state government employees sponsored by the ruling political party, the BJP.

Villagers who had worked under the MGNREGA then tried accessing the ‘Expenditure on Works’ data maintained by the state administration. This revealed that entries have been made on fictitious works totalling a large sum of money. The data has gross irregularities that show many works that were completed years ago marked as ‘ongoing’. It is reported that an estimated Rupees 30 Crore worth work and expenditure has been left unaudited. Infuriated, the villagers from 12 Panchayats presented their findings before a fact-finding team led by Mr. Sachin Jain, the Advisor to Commissioners appointed by the Supreme Court of India in the PUCL case, in the presence of the district administration, on 22 and 23 September.

On the 25 September, Mr. Premsingh Patel (MLA), and Mr. Makansingh Solanki (Member of Parliament) — both from the BJP — led a hastily constituted “Sarpanch – Sachiv Sangh” in a rally in Badwani where they demanded, once again, that the JADS be silenced and its leaders arrested. Interestingly they also demanded the arrest of the literate village youths who were helping villagers process the government data. State government employees participated in this event led by local politicians. The JADS has video recordings of this event.

The ‘Mahapadav’ of today is organised by women and children against this ganging up of corrupt politicians and their dishonest counterparts in the state government. It is this rally that is facing the standoff at the moment of issuing this statement.

The rally, as announced and with due permission from the administration started from the Krishi Upaj Mandi, Rajghat road in Badwani. Before the rally started, Ms. Madhuri and the other leaders of the JADS had met the district administration and the District Superintendent of Police Mr. R. C. Burra. The administration had issued the requisite permit to hold the rally. The District Magistrate even agreed to address the rally when it reaches the Collector’s office. However, the local BJP MLA, Mr. Premsingh Patel, has stopped the rally by force in front of Badwani Police Station. A gang of thugs led by Patel intercepted the rally at a place called Court Chauraha. At the moment they are not allowing the rally to proceed. The police have refused to disperse this crowd of less than 100 people and have instead arrived in full riot gear. The situation now is likely to flare-up with armed policemen separating the two groups with anti-riot vehicles.

The Asian Human Rights Commission (AHRC) views this act by the local politician of the ruling political party of the state as an act of organised aggression upon people’s right to protest and speak against deliberate corruption. The local police have apparently refused to do anything further and have literally aided the local politician by stopping the rally. The AHRC calls upon the state government to immediately intervene in the situation and ensure that the people’s right to peaceful protest and assembly is protected and respected.

A staff member of the AHRC is at the scene and could be contacted at avinash.pandey@ahrc.asia or at +91 9971581020 for further information. Video of the protest is available here: http://youtu.be/QEpPuDHhE_U

BANGLADESH: Three persons faced detention in a fabricated case, lodged by illegal-sand-miners, who are being aided by ruling party parliamentarians  »