Home / News / SRI LANKA: The Right to Know the Fate of Relatives

SRI LANKA: The Right to Know the Fate of Relatives 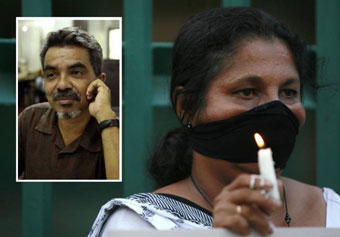 The Right to Know the Fate of Relatives

What was the fate of Prageeth Eknaligoda?

What Prageeth Eknaligoda’s wife and children are asking is this very elementary right:

The Right to Know the Fate of Relatives

Is there anyone in Sri Lanka who will not want this right for themselves?

Is there any culture in which people do not want know the fate of their relatives?

Is there any legal system in which such a right is not recognised?

Modern international law talks about this as right to truth.

What truth is more important to a person than to know the fate of one’s loved ones?

Every right creates an obligation to the government. It is government’s duty to tell those who cannot find out the fate of their loved ones what, in fact, their fate was. The government has duty to provide resources for this purpose and to search for a result. The results of such searches are unpredictable. Expected results may not happen. What is important is a genuine search.

No government is expected to bluff about such a search. If a Government were to do so, that would be immorality at its worst

Has the Rajapakse government engaged in a genuine search about the fate of Prageeth Eknaligoda? The commonly held opinion is: No!

Is that not the worst kind of immorality? It is only the government that can answer that problem in the negative, if it has good reason to show. If the government is BLUFFING, on the issue of the whereabouts of a relative or citizen/s, what kind of governance does it represent?

« SRI LANKA: Where is Prageeth?