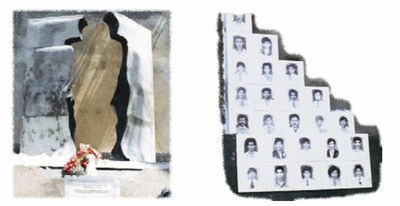 Photos depict the Monument for the Disappeared at Raddoluwa Junction, Seeduwa

Today, August 30th, is the International Day of the Victims of Enforced Disappearances. The International Convention for the Protection of All Persons from Enforced Disappearances defines enforced disappearances as: “…….the arrest, detention, abduction or any other form of deprivation of liberty by agents of the State or by persons or groups of persons acting with the authorisation, support or acquiescence of the State, followed by a refusal to acknowledge the deprivation of liberty or by concealment of the fate or whereabouts of the disappeared person, which place such a person outside the protection of the law.”

Such disappearances cannot take place without the knowledge of the leaders of the government, as well as the high-ranking officers of the armed forces, the police and the intelligence services. Despite denial by the leaders it is quite obvious that enforced disappearances as a strategic weapon cannot be carried out without the approval of the political leaders at a policy level.

The result is that tens of thousands of people living in many of the countries of Asia have become the direct or indirect victims of enforced disappearances, and they do not have any legal avenues available to them to seek justice. The crisis of justice in Asia is mostly sharply manifested by these persons, who go from pillar to post for many years. Very many people spend the rest of their lives without being able to find out what has happened to their loved ones.

In the forums of the Asian nations such as ASEAN and SAARC the issue of enforced disappearances needs to be discussed seriously. There should be a greater regional effort to ensure compliance with the International Convention for the Protection of All Persons from Enforced Disappearances.

Meanwhile, the intellectuals and the academics and other opinion makers in Asia should take the issue of enforced disappearances with much more seriousness, and should ensure that there is greater discussion and debate on this issue regionally and within each nation.

Besides this, it is the duty of community organisations, including religious organisations, to extend their support to the victims of enforced disappearances. Their needs for psychological care should be attended to, and the societal condemnation of this heinous crime should be expressed constantly and with greater force.

The following poem exhibited at the Monument for the Disappeared in Sri Lanka expresses the complexities and the anguish arising from such enforced disappearance.

The Wreath with No Name

This wreath
With no name attached
Is for you
Who have no grave.
It is placed
Beside a road
As the earth which touched
You
Could not be found
Forgive me
For making a memorial
By the wayside.
Forgive me.

(Translated from a Sinhala poem that was published in 1971.)

« PAKISTAN: Rimsha, a Christian girl with Down syndrome

PAKISTAN: Serious concerns about the ongoing enforced disappearances and lack of action by the government  »