Home / News / PAKISTAN: Statement to mark the International Day of the Victims of Enforced Disappearances

PAKISTAN: Statement to mark the International Day of the Victims of Enforced Disappearances 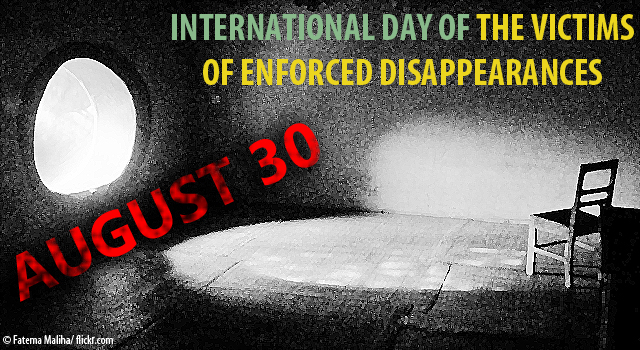 The government as well as the judiciary has today fully realized the prevalence of enforced disappearances – being perpetrated by the military and the intelligence services; that these agencies of the government are abducting hundreds, if not thousands of people from different parts of the country make them disappear, in particular from Balochistan where it is done in staggering numbers. The higher judiciary including high courts of the four provinces as well as the Supreme Court on many occasions in cases of disappearances that have been brought before them  have found that personnel from the Pakistan army and Para-Military to be involved in such abductions, enforced detentions and later disappearances. The courts have on numerous other occasions ordered the officers to be brought before the court – however, these orders have never been respected by the stubborn government and its ally military apparatus. In one such case before the Supreme Court of Pakistan gave order for the arrest of an Army Brigadier on the charges of having been directly involved in an incident of enforced disappearance of persons – but that order was never adhered with.

Moreover, despite such realization that government has failed to legislate nor implement the already existing legal framework to halt such acts of enforced disappearances and bring those responsible accountable before the law – this failure is a also contrary to Pakistan’s commitments to international obligations and had made firm commitments to ratify the International Convention for the Protection of All Persons from Enforced Disappearance. In contravention of all such obligations, responsibilities and commitments government officials have been quoted as saying that because of the well-established military regime and the close links with the armed forces, Pakistan’s government is unable to implement such laws on the ground. In its stead, and rather to everyone’s bewilderment, the government has opted to adopt a law which virtually legalized enforced disappearances and extra judicial killings by armed forces and its intelligence services on the pretext of combating terrorism.

It has been observed by the higher judiciary that intelligence agencies including Inter Services Intelligence (ISI) and Military Intelligence (MI) were involved in abducting people and having them disappear. The courts have also pointed out the involvement of Frontier Corps (FC) and other Para-Military forces in these abductions and enforced disappearances.

There were also rare incidents of disappearances in Pakistan but after the 9/11 incident (the introduction of war against terrorism) disappearances after arrest have become rampant and today a common practice. Enforced disappearances therefore, took roots in 2001 during the military government of General Musharraf on the pretext of combating the terrorism particularly against the Al-Qaida terrorist group. The government instead of attacking Islamic militant groups such as the Al-Qaida, Taliban etc., – the military government taking advantage waged a war against secular and nationalist forces of Balochistan – a province which has no terrorist links , then became the worst affected province by this government offensive. More than 8,000 persons from political and nationalist parties, students, lawyers, doctors, journalists and human rights defenders are reported missing after their arrest by the military, the Frontier Corps or by other law enforcement agencies. The infamous intelligence agencies like the ISI are being openly blamed of disappearances and killing them extra judicially.

More than 100 nationalists from the Sindh province are also reported missing after their arrest by the intelligence agencies and dozens of disappeared persons have been extra judicially killed.

Religious groups claim that more than 2,000 activists have been made to disappear by the military and government intelligence agencies.

The trend in the increase of enforced disappearances has been a direct cause for the proportional increase in instances of custodial torture and extra judicial killings.

Enforced disappearances in Pakistan have become a routine occurrence; worse, it has been accepted by the authorities as a normal practice of law enforcement agencies, including of the army and its intelligence agencies. Major political parties, a sizeable number of whom are members of the parliament, have been dead silent on the issue of enforced disappearances and torture in military detention cells. The distress caused by the disappearances is that, despite the departure of the government of President Musharraf, the menace continues under the remnant civilian governments. On average, in Balochistan alone, every month at least five or six persons are abducted and made to disappear by plain clothed persons. This is frequently done in the presence of police officers who then refuse to lodge FIRs admitting that intelligence agencies are involved in such disappearances.

Yet a new trend has been reported which is the extrajudicial killing and disposal of the bodies of the victims who have disappeared. Through this method it is easy for the abductors to do away with all evidence of the disappearance, following which there would be no grounds to institute the filing of an FIR, no legal process is needed and no perpetrator can be blamed. During the period of former President Musharraf, the phenomenon of disappearances was commenced through the state agents, and this process has continued in the civilian government at federal and provincial levels of killings by means of  extrajudicial methods as a new phase in the story of enforced disappearances in Pakistan – particularly, more so in the province of Balochistan.

Pakistan has amongst the highest number of enforced or involuntary disappearances in the world, with many disappearances continuing to take place, notably in remote areas affected by armed conflict, such as Balochistan Province – in connection with the conflict between governmental armed forces and Balochi Nationalist Armed Forces; Khaiber Pakhtoon Kha province – notably under counter-terrorism, often in connivance with foreign forces; and in Pakistani-held Kashmir – typically for refusal to participate in the “Jihad” inside Indian-held Kashmir or to provide information to the intelligence agencies.

The AHRC has received information concerning hundreds of disappearances in Balochistan since 2002. Hundreds more have also been reported in Khaiber Pakhtun Kha and Pakistan-held Kashmir, with tens of cases being reported in Sindh and Punjab provinces.

Pakistan has appointed several commissions on enforced disappearances but not a single commission was allowed to report on the facts because of the strong resistance from the armed forces and its intelligence agencies. A judicial commission was also formed headed by a judge of the Supreme Court, who later retired. The commission had the mandate of completing its findings in one year but, in fact, two years have passed and the commission has still not finalized its proceedings. The Supreme Court has been tackling this issue since 2005 but the court has still not come out with the facts about the missing persons. There is always a big fiasco and a show of good faith made in the court rooms, on the date of the hearings in order to appease the media but all this has never led to stopping the menace of enforced disappearances – despite incontrovertible evidence. Nor has any person from the armed forces and its intelligence agencies, been brought to justice and been made accountable for the enforced disappearances.

In many cases victims who were released from captivity of the armed forces testified before the higher courts that they were held in military torture cells however, the courts have repeatedly refused to pass any judgment and refused to call for a proper inquiry on the evidence provided by the persons themselves who have been held in undisclosed places, tortured and abused for periods of several months in the least.

The Asian Human Rights Commission (AHRC) has documented hundreds of cases of extra-judicial killings in Pakistan, all of which have been accompanied by impunity, due to a lack of investigations and prosecutions. Many such killings are linked to enforced disappearances and torture, following which victims only surface after they are dead – most often even the body, does not surface. For example, in Balochistan Province, between July 2010 and January 2014, the AHRC documented more than 700 extra-judicial killings and following abductions by paramilitary forces or following enforced disappearances by Pakistan’s law enforcement and security agencies. Journalists, teachers, political activists, students and human rights defenders have been targeted in particular.

The AHRC urges the government, even at this late stage, to affirm its commitment to end enforced disappearances once and for all, by ratifying the International Convention for the Protection of all Persons from Enforced Disappearance and to enact laws against the enforced disappearances. The government must show its political will to respect the freedom and liberty of the individual and must eliminate the practices of keeping persons in incommunicado, practices of torture and extra judicial killings.

If there is concrete evidence made available of any person’s involvement in such gruesome acts of terrorism and extra constitutional/judicial activities such persons should be and must be brought before the law and the judiciary should be the sole adjudicator who should be accorded with the power to try the accused persons and pass judgment and to see that such judgment is implemented.

The AHRC urges both the parliament and the judiciary of Pakistan to take charge of the defense forces and make them answerable to the people of Pakistan. In doing so the government must repeal with immediate effect, the Pakistan Protection Act 2014 – which gives draconian power to its military forces and other law enforcement agencies. There must be established a system of rule of law – which is non-existent in Pakistan – and the military should be brought only under such a framework based on the rule of law.