Home / News / BANGLADESH: People pay more to the police than to their government

BANGLADESH: People pay more to the police than to their government 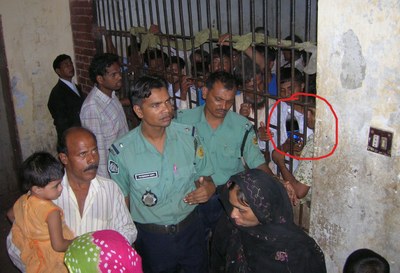 Bangladesh’s law-enforcement agents have a reputation for abusing authority through coercive means. They are and have been the hired thugs of all the ruling regimes. Policing in the country is an industry of producing victims of torture and fabrication of criminal charges against civilians and political opponents since long. Corruption has replaced the chain of command within the police.  The constant failure of the police to credibly investigate crimes is the single largest impediment within the criminal justice administration in the country.

To keep the police subservient to the ruling elite the government has kept the salary of the police force very low. This opens the floodgates and serves as incentive for the police officers to demand and accept bribes. Impunity provided to the force against prosecution for corruption and all other crimes these officers commit is returned by the force by undertaking cleanup work for the ruling elite, most often by ‘dealing’ with political opponents. The disparity between the wealth of some police officers and their actual income is proof to this illegal nexus of corruption and protection between the police and politicians in Bangladesh.

The ordinary people, for whom the police is the most visible and powerful presence of the state in the rural and urban settings, pay bribes to the police on a daily basis. People pay bribes to the police for registering a General Dairy entry and complaints; to prevent officers from torturing or ill-treating them, for inclusion or exclusion of a person’s name from the lists of accused or witnesses in a complaint and the like. They pay the police for arresting a suspect, while the same suspect pays the police to obtain a release from custody. Complainants pay the police for bringing a charge against the respondent in the police investigation report while the respondent pays for dropping the charge. People pay bribes for the police to collect and preserve evidence in criminal investigations – known as alamotin Bangladesh – until the evidence is handed over to the courts. In cases of unnatural death if the body is to be recovered and sent to a public hospital for autopsy, the relatives or those interested in the case have to bribe the police for transporting the body. Without bribing nobody can expect the police to undertake a proper inquest. Equal amounts or perhaps more has to be paid at the hospital as well.  This is the case in rape charges as well.

Any hawker, from those who sell peanuts or candy squatting in a footpath or moving around in streets or public parks, must bribe the police routinely, failing which the police would fabricate false charges against the hawker. Likewise, the illegal drug-peddlers or arms dealers bribe the police to sustain their business. Officers who are responsible for maintaining road traffic demand and accept bribes from drivers and transport company owners. If a case of traffic accident were to be registered the complainant should bribe the officer and if the accused pays higher amount to the police, the police could shift burdens of the accused and the complaint as the officer chooses. Most officers own assets disproportionate to their legitimate source of income. Many officers to avoid problems maintain these assets in the names of their relatives.

Unfortunately the government is least bothered about this plight of the people. Often the officers’ family do not care that most of their conveniences in life has a story of sorrow, misery and blood of the common citizens. Often the acquisition of a police officer is the ‘blood’, ‘sweat’, ‘sigh’, ‘tears’ and ‘curse’ of the ordinary citizens!

The country must end this entrenched institutional wilt and treat it as the matter of highest priority. Unless Bangladesh reforms its policing system, make it a professional body, equipped and trained to serve the people as required in any modern democracy, there will be no hope for the people, failing which justice, equality and fair trial would be impossible in the country.

« NEPAL: For the ordinary folk, limited progress in liberties, opportunities and income in recent years