On 5 October 2016, Joshua Wong, a student activist who became a global icon for the fight for democracy in Hong Kong, made headlines in media once again after the Immigration in Thailand barred him from entering the country and detained him for around 12 hours at an undisclosed place. He was eventually deported to Hong Kong. The Asian Human Rights Commission (AHRC) believes the Immigration Department’s action was under the instructions of the Government of China, fueled by Thai military junta’s own regressive attitude against free speech and democractic values. 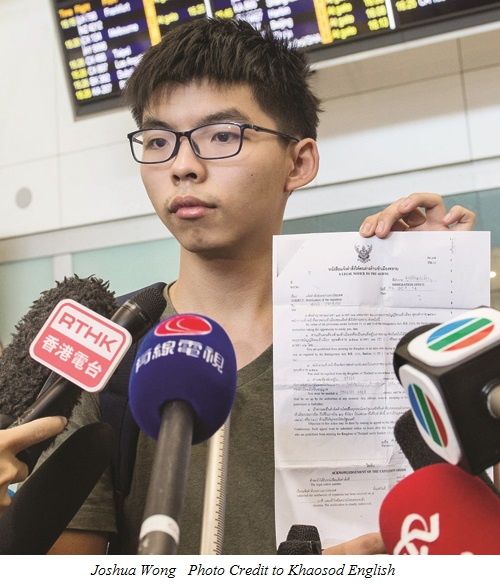 Joshua Wong, a Hong Kong student activist, and the Secretary General of DemosistÅ Party, was invited to the Faculty of Political Science of Chulalongkorn University in Thailand, to give a talk on politics of the new generation, at an event commemorating the 40th anniversary of the 6 October massacre of over a hundred pro-democracy students and bystanders at Thammasat University in 1976 by military and paramilitary forces.

On 5 October 2016 at around 11:45 pm, soon after Joshua Wong arrived at Suvarnabhumi Airport, more than 20 police and customs officials apprehended him. They had been waiting for him and met him even before he got to the passport control. Thai authorities instructed that Joshua hand over his passport, as he was told that he had already been blacklisted and that it was “impossible” for him to enter Thailand. His entry was blocked on the basis of Article 12 (7) of the Immigration Act B.E.2522 (1979), which states that anyone constituting a threat to national security or who is listed under arrest warrants issued by foreign governments should be prohibited from entering the kingdom.

In addition, Thailand’s immigration also threatened him using word like “this is Thailand, the same as China. This is not Hong Kong,” and “Here, we can treat you very well, or purposely make things difficult for you, you know to what extent we can do this – so which do you want?” In that situation, under pressure, Joshua Wong told the media, “I did not know if I would be unable to return to Hong Kong the next day, or whether I had to wait one day, two days, one week, one month, or an indefinite amount of time.”

Thai and Hong Kong activists swiftly condemned Thai authorities for Joshua Wong’s detention. According to Prachatai, the New Democracy Movement (NDM), an anti-junta activist group, held a protest in front of the Chinese Embassy in Bangkok shaming both the Thai and Chinese governments. In Hong Kong, Wong’s supporters, held a similar rally in front of the Thai Consulate.

On 10 October 2016, Wang Yi, the Minister of Foreign Affairs of the People’s Republic of China told Reuters that the Thai’s government made a decision and deported Joshua Wong to Hong Kong without any request from China.

The AHRC believes that Joshua Wong’s deportation goes beyond the Military government’s foreign policy, which is unwilling to engage with a democracy activist. It can be clearly seen that Thai authorities have attempted to prohibit individuals who exercise their right to freedom of expression and to suppress pro-democracy activist movements.

In the case of Josua Wong, Thailand Immigration claimed that his actions were a threat to national security and so he should be prohibited from entering the country. However, under Article 12 (7) of the Immigration Act B.E.2522 (1979), the immigration officer cannot claim that they had the right to detain Joshua Wong. The Immigration Bureau actions have resulted in arbitrary detention, which violate both domestic and international law, and the Immigration Bureau’s action is State violence.

The AHRC wishes to point out that since the 2014 coup d’état, the Thai government has deported scores of political dissidents, who came to Thailand as asylum seekers, back to Mainland China. According to Prachatai, in November 2015, the Thai government arrested Dong Guangping and Jiang Yefei, human rights defenders from China, recognised as refugees by the UNHCR. They were later deported to China reportedly upon Beijing’s request. In October the same year, Gui Minhai, a bookseller from Hong kong selling books critical of the Chinese government, vanished from his house in Pattaya in Thailand, before reappearing in Mainland China in custody. This is all on top of the deportation of 109 members of the Uighur ethnic minority in July 2015 at the request of the Chinese government, who claimed that they had committed crimes.

Over the past two years, there are a lot of pro-democracy activists, human rights defenders, academicians, and media persons, who have been prosecuted by the State for exercising their freedom of expression and opinion. Josua Wong’s deportation is an example of how the Thai government has sent the right to freedom of expression and opinion into free fall.

It has been more than a week since October 5 and Thailand’s Immigration Bureau has not yet provided any concrete evidence, on the basis of which they claimed to prohibit Joshua Wong from entering Thailand.

The AHRC calls on the Thai government to immediately issue a clarification on the detention and deportation of Joshua Wong. The Thai government must guarantee and respect the right to liberty and security of persons, whether they are Thai citizens or not.

« PAKISTAN: Call for judicial inquiry into killing of engineer in fake police encounter