INDIA: Poverty will remain unless public justice system is reformed 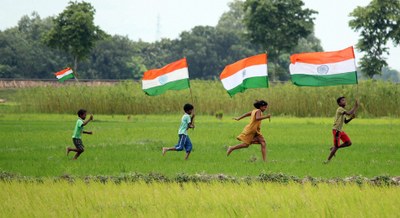 India’s battle against poverty has reached the phase of “elimination” from “alleviation” said President Pranab Mukherjee in his address to the nation. That was last evening, the eve of 68th Independence Day of the republic. It was encouraging to listen to the president explain that the difference was not merely about semantics. “Alleviation is a process; elimination is a time-defined objective”, he elaborated.

How his government will go about that remains a mystery, even if one does not doubt the intent. No one can disagree that the benefits of economic development must percolate down to the poorest of poor. How his government will achieve this percolation, “trickling” in previous government’s parlance, is what he chose not to elaborate upon. Nor did he touch on the fact that poverty does not exist in a vacuum. There is an economic rationale that benefits more from sustaining poverty than eradicating it. Ironically, that economic rationale lives in the interconnected structures that produce, shape, and define the public institutions without which there can be no rule of law. It may sound strange at first, but then the criminal justice system is the isle upon which the system grows.

Take the status of thousands of social welfare schemes launched by the provincial and central governments to alleviate property; why does poverty remains so high despite them? Huge leakages from these programs, including various forms of corruption, come readily to mind. Why does corruption continue despite being illegal? Why do the poor not fight against it despite knowing that it is their money and resources that are stolen? The answer is simple: they do not because they know that the criminal justice system is not only corrupt itself, but is also skewed heavily in favour of the vested interests entrenched in the system, from feudal landlords to the corporations.

The police, the first point of contact between the aggrieved citizenry and the state, scare them and they do so intentionally. Even if they dare to take the risk of approaching them, the prosecution (as underfunded, inefficient, incompetent, and overburdened as the police) fails them yet again. At the end of the chain comes the dreaded trial system masquerading as courts of law. Something as simple as a case of local level fudging of funds earmarked for the poor can drag on for decades with the usurpers having the best lawyers and the victims the worst.

The poor, understandably, neither have time nor means for fighting these treacherous battles of redress; battles that come with real threat of physical violence. They know that the police, again, will be bought by the usurpers and adding one more opponent to struggle against. Another major issue that puts the reforms in public justice system at the core of fighting poverty is that a faulty justice system reinforces itself and worsens the situation. For instance, while a faulty education system will not make the student worse with knowledge even while keeping him as incapable as he was before joining. A faulty justice system makes the situation worse by creating a self-sustaining cycle of violations that further impoverishes the victims.

This is the rottenness in the criminal justice system that has rendered any attempts of even alleviating poverty, without eliminating it, largely meaningless. The government must address the issue of putting an effective, efficient, and accessible system of grievance redress in place. The money and resources earmarked for the poor will keep getting siphoned off until it does.

« THAILAND: Criminalization of freedom of expression of student activist and human rights defender by junta