Home / News / INDIA: Living up to 102 years not enough to find justice

INDIA: Living up to 102 years not enough to find justice 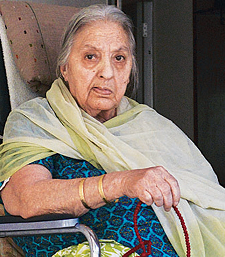 Mrs. Amar Kaur lived a long life and died on 12 December 2017 at the age of 102. What is important about Mrs. Kaur is not just the advanced age into which she lived. Kaur is one of the prime witnesses in a case of disappearance and alleged murder that was reported in 1994 from Ludhiana, in Punjab.

Mr. Sumedh Singh Saini and Mr. Sukhmohinder Singh, Senior Superintendent of Police and Superintendent of Police in Ludhiana respectively, and Police Inspectors Mr. Paramjit Singh, and Mr. Balbir Tiwari are the accused in the case. These officers are accused of having arrested Kaur’s son, Mr. Vinod Kumar, son-in-law Mr. Ashok Kumar, and their driver Mr. Mukhtiar Singh on a fabricated case and to have murdered the three men. They are also accused of having destroyed the evidence of the crime by disposing off the bodies irrecoverably.

Kaur and her family alleged that Saini is the mastermind behind the crime. Kaur’s family also alleged that the crime was committed by Saini to settle his private score with Vinod and Ashok relating to business deals concerning an automobile shop, Saini Motors, owned by Saini’s relatives.

The Central Bureau of Investigation undertook the investigation in the case. The case was first transferred from Ludhiana to Ambala by the Punjab and Haryana High Court. The Supreme Court later transferred the trial to New Delhi from Ambala, accepting Kaur’s concern that the Saini would interfere with the trial by influencing witnesses.

When the case came up for trial at the CBI Special Court in New Delhi, the prosecution listed 36 witnesses. The trial however has dragged on in the court. For instance, the examination of one of the witnesses Mr. Ashish Kumar that began on May 14, 2012 went on until 2015.

The long delay is the result of the defence intentionally protracting the proceedings and the judiciary playing to their tune. But such delay is no news concerning this case, since the accused were charged by the court only on 5 December 2006 for a crime that was committed on 15 March 1994. This, however is a norm in criminal trials in India.

As the trial snail-paced in the courts, Saini has become the Director General of Police in Punjab. Meanwhile, from her hospital bed, Kaur sent telegrams to the trial court and to the Delhi High Court, pleading the court to expedite the trial, so that she could “die peacefully.” It did not happen however.

Having lived for 102 years and fighting to unravel the truth behind the crime for 23 years, Kaur died on 12 December 2017. One of the witnesses in the case, Mr. Rajive Bhalla, who was the lawyer for Vinod and Ashok, later became a judge and retired of the Punjab and Haryana High Court. Bhalla had witnessed the police arresting Vinod and Ashok from the High Court premises. Bhalla’s examination is yet to be over.

Kaur’s case is not an exception in India. Judicial process, particularly criminal trials where police officers or otherwise influential persons are accused of crimes will drag on for decades. During this protected and therefore failed process, witnesses die or otherwise move on with their life and forget the events that they once witnessed decades ago. Evidences get destroyed or perish, and victims of crimes like Mrs. Kaur and her family perish in despair.

The state of criminal justice delivery in India has long been like this. Delays, foul practices by powerful lawyers to protract the proceedings in courts, and an irresponsible and incapable judiciary is the hallmark of Indian justice architecture.

The overall result of this failed justice architecture in India is millions of Indians have lost their trust in judicial process and fair trial. Thousands languish as under trial prisoners in India. While all of this is going on, Indian judiciary is increasingly showing tendencies to throw away from court, complaints and litigations for petty or unreasonable causes.

The Supreme Court of India and the subordinate judiciary is gravitating towards legitimising an authoritative Union Government. The latest of this is the Supreme Court’s decision to dismiss the case a few days ago, that it heard for more than a year regarding the need for a specific law to criminalise custodial torture. Despite the peremptory norm under international law that applies under all conditions to India, the practice of torture and ill-treatment is consistent and widespread in the country.

Likewise, is the decision of the court to ‘punish’ the petitioners in the case filed by Campaign for Judicial Accountability and Reforms and lawyer Ms. Kamini Jaiswal. The petitioners had sought an independent court-monitored investigation into allegations that former members of the higher judiciary took bribes to manipulate orders in the Supreme Court in favour of medical colleges that had been denied official registration by the Medical Council of India.

The CBI is investigating the case. The petitioners had requested the matter be heard without involving the incumbent chief justice, who had handled matters related to the Medical Council of India earlier this year. The court dismissed the petitions, by two separate orders issued last week. It then imposed costs of Rs. 25 lakhs to be paid to the Supreme Court, which the court will then transfer to the Supreme Court Bar Association Advocates’ Welfare Fund. As strange as these two orders appear, it also raise questions regarding the role the Bar Association has played in ‘securing’ the dismissal of the two petitions. The Association was not a party to the litigations.

Justice delivery in India is a phantom limb and fair trial a mirage. Yet all that is been done to address the problem is the Supreme Court of India’s periodical statements in despair about the thousands of cases pending disposal before the Indian courts. No honest effort has been made to study the reasons for delays, and therefore no measures have been put forward to address the problem.

A country where its judiciary is dead for all practical purposes for the common person, the state and its functionaries have no accountability, and where state institutions particularly its police functions with impunity, has a dark future. Yet, terming it a democracy and millions believing it to be one, highlights the intellectual wilt that has set in, in the country.

Yet, India could be redeemed from its current path to destruction. This requires the collective wisdom of the country, to demand from the institutions, accountability.

« INDIA: Odisha government must return the land acquired for POSCO to its original owners