THAILAND: Re-arrest of editor and human rights defender by junta 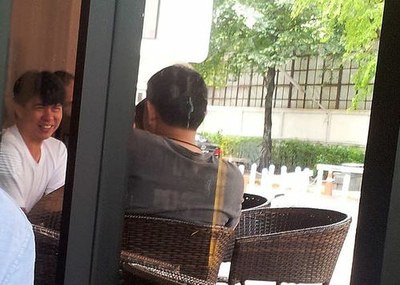 The Asian Human Rights Commission (AHRC) is gravely concernedto have learned that Thanapol Eawsakul, writer, human rights defender, and editor of Fa Diew Kan (Same Sky) journal and publishing house, has been re-arrested and is being held by the National Council for Peace and Order (NCPO). The conditions of his re-arrest and detention are arbitrary and a clear derogation of the Government of Thailand’s obligations under the International Covenant on Civil and Political Rights (ICCPR). The AHRC views his re-arrest and detention, which the junta has claimed is a period of “attitude adjustment” in relation to his social media postings, as an ominous indication of the ongoing crisis of human rights following the recent coup in Thailand.

On 22 May2014, led by General Prayuth Chan-ocha, the NCPO took power and abrogated the constitution in Thailand. During the first six weeks of rule by the junta, there have been severe restrictions placed on freedom of expression and political freedom, ongoing formal and informal summons to report to the junta, extensive use of arbitrary detention, the activation of military courts to process dissidents, and the creation of a general climate of fear detrimental to human rights and the rule of law. Under the terms of martial law, which were put in place two days prior to the coup, soldiers can detain and interrogate anyone for up to seven days without having to provide evidence of wrongdoing or bring formal charges. People arrested can be held at irregular places of detention, including permanent or temporary military bases or other sites designated as places of detention. Detention in irregular places means that the possibility for rights violations, including torture, forced disappearance and extrajudicial execution is greatly increased.

While the junta has refused to provide full details of the number of people detained and the places of detention, Thai Lawyers for Human Rights (TLHR), a group of lawyers and human rights defenders who formed following the coup to redress human rights violations caused by the junta’s rule, compiled statistics on the one-month anniversary of the coup. TLHR noted that during the first month of rule by the junta, at least 454 persons were publicly summoned to report themselves in Bangkok, and at least 57 were informally summoned in the provinces. The full report can be read in English here and in Thai here. While the junta has repeatedly claimed that those who are summoned and then held are not being detained, but are instead being offered “accommodation” and “attitude adjustment,” the penalty for not responding to the summons is possible processing within the military court system and a punishment of a prison sentence of up to two years and/or a fine of up to 40,000 baht.

Since the first days after the coup was launched, the NCPO has explicitly targeted dissident thinkers, academics, human rights defenders, journalists, and artists. Thanapol Eawsakul is a long-time editor, writer, and long-time human rights defender who has consistently worked to create space for the voices of those marginalized and repressed in Thai society, and has been among those targeted by the junta since the beginning.  He was first arrested with several other people during a peaceful protest against the coup on 23 May and detained for one night at the Signal Department of the Royal Thai Army (AHRC-STM-099-2014). Then, he was included on the list of persons named in Order No. 5/2557 [2014] on 23 May, which was broadcast on the radio and television and demanded that those named themselves to the Army Club on Thewet Road by 4 pm on 24 May (AHRC-STM-100-2014). As he was already in custody at that time, the authorities transferred him to the Army Club, and he was then detained for an additional seven days, the maximum permitted under martial law. Like all others released from detention by the NCPO, under Announcement No. 39/2557 [2014], Thanapol was compelled to sign a statement agreeing to a number of conditions, including that he would not exercise his fundamental human rights to free expression or assembly, or leave country without permission of the junta. The conditions of release reinforce the essentially arbitrary character of the process of detention, since they refer to no law and are issued under the exclusive authority of the junta.

According to information provided by TLHR, Prachatai, and Khao Sod, on the morning of 5 July, Thanapol Eawsakul received a phone call from an unidentified military officer who requested that he come to Coffee Zelection, a café on Phaholyothin Soi 7 in Bangkok for a conversation. He complied, and shortly after his arrival, a military officer out of uniform took him into custody in an unmarked private car and then took him first to the King’s Guard, 2nd Cavalry Division in the Sanam Pao area and then to the Police Crime Suppression Division for further detention. On 7 July, an official from the Department of the Judge Advocate General in the Ministry of Defense claimed that Thanapol’s Facebook postings constitute a violation of the conditions of his release. He has not been formally charged, and the same official has publicly claimed that he may be released as soon as 9 July as he is being detained for “attitude adjustment” and he will be released as soon as this process is complete.

The continued arbitrary detention, use of military courts (See the AHRC’s letter on military courts to the United Nations Special Procedure mandate holders on 2 June 2014: AHRC-OLT-006-2014), and constriction of freedom of expression by the NCPO are clear derogations of Thailand’s responsibilities as a state party to the International Covenant on Civil and Political Rights.  In particular, both instances of the detention of Thanapol Eawsakul are a violation of the obligations under article 9, which provides specifically that, “1. Everyone has the right to liberty and security of person. No one shall be subjected to arbitrary arrest or detention. No one shall be deprived of his liberty except on such grounds and in accordance with such procedure as are established by law. 2. Anyone who is arrested shall be informed, at the time of arrest, of the reasons for his arrest and shall be promptly informed of any charges against him. 3. Anyone arrested or detained on a criminal charge shall be brought promptly before a judge or other officer authorized by law to exercise judicial power and shall be entitled to trial within a reasonable time or to release…” The AHRC would like to emphasize that there is no legal basis for the detention of citizens without charge for “attitude adjustment.” This is an instance of the repressive and unchecked use of power by the junta.

While the junta has claimed, through the use of martial law, that the current social and political situation represents a public emergency in which the derogation of responsibilities is permitted, the AHRC’s assessment is that no such situation exists in Thailand at this time. Despite the country’s ongoing political unrest, much of which dates to the prior coup in September 2006, it is beholden on the civilian authorities to deal with that unrest in accordance with ordinary procedures. Despite the assurances of authorities that they will respect human rights, the consistent experience in Thailand has been that where special laws have been used, people affected by the laws have encountered a corresponding increase in cases of arbitrary detention, torture and denial of due process rights. Nothing in the present circumstances offers reassurances that the same will not occur in the vacuum of protections for human rights created by martial law and the absence of a vibrant constitution.

The Asian Human Rights Commission unequivocally condemns the coup in the strongest terms and wishes to express grave concern about the rapid decline of human rights protections it has engendered. The AHRC calls on the NCPO to immediately release Thanapol Eawsakul and all citizens being arbitrarily detained without charge and to cease creating public terror throughissuing summons to report to the military, sending private letters of summons, and detaining individuals for “attitude adjustment” after requesting a meeting on another pretext.Further, the AHRC calls on the NCPO to recognize that tolerance for different ideas and dissent are part of building a polity grounded in human rights and the rule of law. To defend human rights and think differently than the junta are not crimes.

« INDIA: A Discordant Note on the Dowry Order

SRI LANKA: The Defence Ministry’s Warning to all Non-Governmental Organisations »