Since the May 22, 2014 coup, the ruling military junta of the National Peace and Order Maintenance Council (NPOMC) has begun a process of mass arrests of those who oppose them. This has included the arrest of peaceful demonstrators in Bangkok on May 23, 2014 (AHRC-STM-099-2014) and in Chiang Mai and Bangkok on May 24, 2014, as well as a series of orders announced via public broadcast beginning on May 24, 2014, for citizens to report themselves to the military (AHRC-STM-100-2014). In addition, according to information documented by Prachatai online newspaper, the Asian Human Rights Commission has learned that there are 12 red shirt activists who been arrested following requests to report themselves and are currently in detention in Chiang Mai and Chiang Rai provinces in northern Thailand. The AHRC is gravely concerned about the safety of all of those currently in military detention in Thailand. 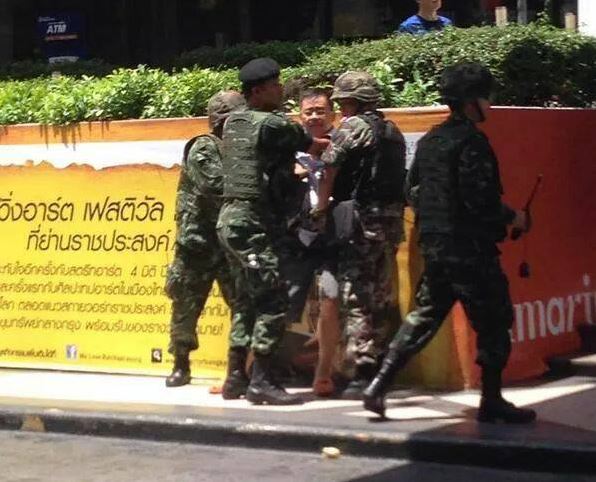 In Chiang Mai province, there are 9 persons who have been detained since being called to report themselves at 7 pm on May 22, 2014, from three different red shirt groups.

Prachatai has reported that all of this group except for Sucheera Raksaphakdee are suspected of being held at the Seventh Army Regiment Camp (also known as Khun Nen Camp) in Mae Rim. Sucheera Raksaphakdee is suspected of being held at the Army Force Base 41 in Chiang Mai city. Others reports indicate that the number of those detained in Chiang Mai may be higher than these 9 who are known to who are known to be detained. There are also reports that the home of Professor Thanet Charoenmuang, political scientist and education advisor to the former Pheu Thai government, has been raided multiple times but that he has not been arrested.

In Chiang Mai province, there are 3 persons known to be held:
1. Ms. Jiranan Janthawong (Khon Muang Love the Nation, Chiang Rai)
2. Ms. Kessanee Chunchom (Chiang Rai 49 group)
3. Mr. Somchai Saengthong (Red Shirt Village for Democracy, Chiang Mai
The location of detention of these three persons is not known. An unknown number of red shirt leaders and additional persons have been told to report themselves to the military in Chiang Rai.

Unlike the summons of academics, activists, writers, and others announced on May 23, 2014 (AHRC-STM-100-2014), these 12 persons were not summoned via public broadcast, but through local army operations. Like the summons announced, however, this is a clear case of arbitrary detention. These 12 persons are red shirt activists who oppose the coup. Those held have not been formally charged with any alleged crimes. If the junta has evidence that those in detention have committed wrongdoing, then they should be formally charged through the judicial system and using the Criminal Code.

While the junta has made reassurances that those who report themselves will not be mistreated, within the context of martial law and rule by the junta, this reassurance carries no weight. Citizens are subject to up to seven days of detention without the authorities having to provide evidence of wrongdoing or bring formal charges. Detainees can be held at irregular places of detention, including permanent or temporary military bases or other sites designated as places of detention. Detention in irregular places means that the possibility for rights violations, including torture, forced disappearance and extrajudicial execution is greatly increased.

The Asian Human Rights Commission unequivocally condemns the coup and wishes to express grave concern about the rapid decline of human rights protections it has engendered. The AHRC calls on the National Peace and Order Maintenance Council to immediately release all citizens being arbitrarily detained without charge and to cease creating public terror by issuing summons to report to the military.

« THAILAND: Army issues summons to activists, academics, writers, and others

THAILAND: Concern for detainees of the military junta »