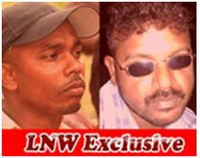 Lalith and Kugan also belong to the same political faction of the JVP as Mr. Gunaratnam and Ms. Attigala who were abducted and released after the intervention of the Australian government. This JVP faction formed themselves into a new party just this week under the name of the Frontline Socialist Party.

Concerned persons request everyone to take steps to pressurize the Sri Lankan government to release these two persons immediately.

For details of the abduction of Lalith and Kugan kindly see: SRI LANKA: The disappearances of Lalith Kumar Weeraju and Kugan Muruga