In an act of blatant discrimination against the Christian religious minority, and an infringement of Article 27 of the Constitution of Pakistan, the Hyderabad Municipal Corporation has invited applications for the job of sewers from Non-Muslims only. Moreover, applicants are required to take an oath on their religious holy book – Geeta or Bible – that they will never do anything else but work as a sanitary worker, and will never refuse to carry out the work.

This is not the first time that Article 27, which provides safeguards against discrimination in services or employment, has been so blatantly trampled upon. The government has adopted a systemic policy of reserving sanitation posts for non-Muslims. On 18 September 2015, the Mandi Bahauddin, Punjab province’s District Head Quarter Hospital, publicized 10 vacancies, where sanitation jobs were reserved for minorities. A similar advertisement was issued by the Lady Wellington Hospital in Lahore, requiring only “non-Muslims” for this work. In 2015, the Punjab Cardiology Hospital issued an advertisement in several newspapers, which stated that “Only Non-Muslims persons who belong to minorities will be accommodated” for sanitation work. Though the advertisement was later redacted, it was made publicly clear that sanitation work was beneath the Muslim majority population.

This prejudice against non-Muslims, particularly the Christians, has its roots in history. Prior to independence, Dalit Hindus were entrusted with such menial jobs. When they left Pakistan in hordes post independence, the Muslim majority complained to the local administration about the lack of human resources to clean. Consequently, the Christian converts from Dalit Hindus were used to fill in the vacuum. While these Dalits had converted from Hinduism to Protestant Christianity to escape caste discrimination, the stigma of being sanitation workers remained with the community. Their Dalit ancestry remains a distinct feature of social discrimination against Christians in Pakistan.

Since 1988, over 80 Christian sanitary workers have died from inhaling toxic fumes while cleaning sewers, states a Minority Rights Commission report. The most recent death occurred in June 2017, when a Christian sanitary worker fainted from inhaling toxic fumes and was not given medical treatment due to discrimination by hospital staff. Irfan Masih was clearing a blocked sewer in Pakistan’s Sindh Province when he was overcome by toxic fumes. The 30-year-old Christian died in hospital after doctors refused to treat him during the month of Ramadan.

Since 2013, when the Chief Minister of Khyber Pakhtunkhwa Province offered a public apology for stating that “Muslims cannot be hired as sweepers or cleaners,” because sanitation work “can only be carried out by Christians, Hindus and lower castes”, the state has adopted an unapologetic attitude for such discrimination. In March 2017 for instance, an advertisement for sweepers in Bannu district, northwestern Pakistan, called for applicants from Hindu, Christians and Shia religious minorities. Although officials now claim that ‘Shia’ was added by mistake, they maintain that religious minorities are preferred for these jobs.

Pakistani Christians’ lack of education is one of the root causes of the community’s social and financial decline. It is also why they can only find such menial work.

According to a report by World Watch Monitor, minority representation in sanitation work in Pakistan is above 80 percent. The breakdown of the number of Christian sanitary workers is as follows: 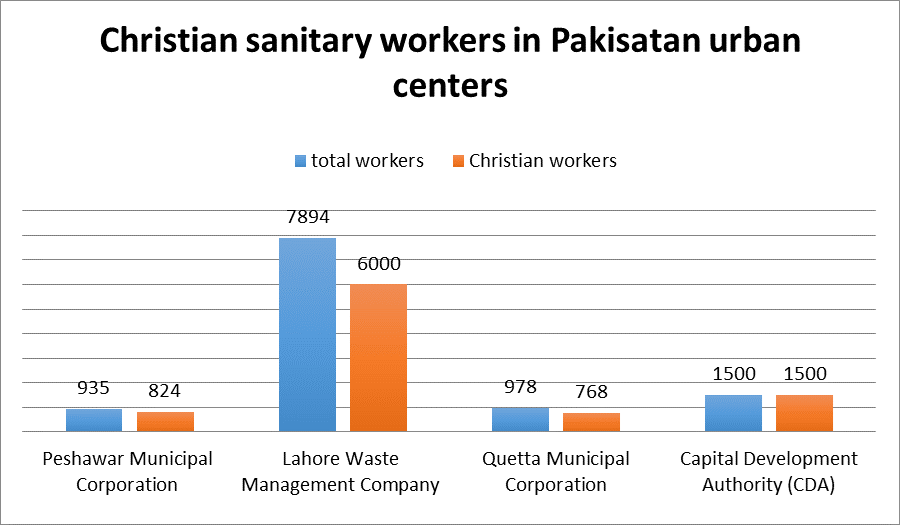 Christians also have a very high representation in Gilgit and Karachi municipal corporations.

The state’s economic discrimination continues, despite a notification from the Services and General Administration Department to amend eligibility rules for sanitation jobs. The notification has amended Service Rules 2003 so that minorities are no longer associated with only sanitary work.

The UN and ILO’s Discrimination (Employment and Occupation) Convention, 1958 (No. 111) describes discrimination as “Any distinction, exclusion or preference made on the basis of race, colour, sex, religion, political opinion, national extraction or social origin, which has the effect of nullifying or impairing equality of opportunity or treatment in employment or occupation”.

Though many Pakistanis can be found doing menial jobs abroad, it is rare to find any Muslim doing the same job in their own motherland. The attitude within Pakistan is as though the Christians were in the country to clean up after Muslims. How can one expect greatness from a nation that does not even know how to clean its streets and treats its sanitary workers as sub humans?

It should not be forgotten that the Christian community has given the country several stalwarts, such as legal giant Justice Cornelius, and slain human rights activist and minister of minority affairs Shebaz Bhatti. Their contributions in the education and health sectors have provided many Pakistanis with the best medical and educational facilities at a nominal price. The Christian community has also played a pivotal role in the freedom movement, but all these contributions are sidelined by the theocratic state bent upon promulgating its own version of political Islam.

The government of Pakistan must stop forcing religious minorities into degrading jobs. It should also work on sensitizing society, to encourage a pluralistic and egalitarian atmosphere where the rights of minorities are equally protected. It is imperative for a strengthened Pakistan that all its citizens, regardless of caste, colour, ethnicity, political or religious association, be treated on equal footing by the state. The government of Punjab in particular, should immediately stop the policy of discrimination and bias against its beleaguered Christian community.