INDIA: Judiciary not a traffic warden 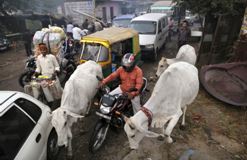 The Asian Human Rights Commission (AHRC) appreciates the Supreme Court of India’s initiative to institute a panel that will suggest measures to prevent road accidents and to ensure road safety in the country. The court has set up the panel after hearing a public interest litigation, filed by Dr. S. Rajaseekaran, (295/2012) which requested judicial intervention and direction to the union government to ensure road safety in India. The court appointed panel will be chaired by Justice K. S. Radhakrishnan, upon his retirement from the Supreme Court.

Honourable though the cause may be, a fundamental question has not been confronted: whose job it is to ensure road safety in the country?

Statistical data relied upon by the court shows an alarming picture – that of an estimated 126,896 deaths in road traffic accidents annually. In addition, about 466,600 persons suffer serious injuries in road traffic accidents in India every year. Placing  responsibility for this on drivers, and on inadequate knowledge of first aid amongst average Indians is a wrong step to start with. All reports that the court has examined highlight these two as major factors that contribute to traffic deaths.

The primary responsibility of keeping the country’s roads safe rests with the government. As long as an environment prevails in India where anyone can pay, as little as Rs. 1,000, to obtain a driving licence, driving on Indian roads will remain a game of Russian roulette. What, pray, has the court done so far to end corruption that is rife in the motor vehicle department?

Central, too, is the role played by local police in traffic safety. As long as corruption and incompetence remain two defining characteristics of the Indian police, expecting safer roads on the same watch is silly. If police reform remains something the Indian state won’t touch with a maypole, Indian road safety will remain oxymoronic.

Ingrained corruption reflects in road conditions as well. Potholes, roads in various states of decay, is what most Indians still associate with the word road. Parking bays and bus halts away from the flow of on-going traffic, are default standards in every country where human life is respected and cared for. In India, however, such facilities are limited to a few metros and on a few highways constructed under build, own, and transfer schemes. In most places, traffic lights do not function, and even if they do few bother to follow them. Road constructions are undertaken in a haphazard manner, since a large slice of the inflated estimates approved for construction are paid in kickbacks to bureaucrats and ministers feasting off the public works department. And, corruption thrives around constructions that require regular repair.

Above all, it is important that drivers that violate traffic rules be punished. Here, the court has prime responsibility not to harass witnesses willing to assist due process. As long as it fails to guarantee that a witness will not have to visit a trial court for decades for having witnessed a traffic offence, the judiciary cannot expect that lay people will assist victims who need immediate medical assistance. As long as the police continues to book good samaritans, in the name of investigating traffic incidents, what good will having updated knowledge of first aid do to citizens? The humanity that the court does not show the people it is meant serve, cannot be expected from the people unconditionally.

One result of such a callous and scandalous law enforcement regime, ridden with corruption and ineptitude, is the alarming number of road traffic accidents in India. It is the responsibility of the Indian state, the executive and the legislature, to tackle the prevailing quagmire.

It is this premise that the court should have comprehended before setting up a panel that creates the impression that it can ensure traffic safety in the country. Creating such false belief is more dangerous than the evil this machinery is ill-equipped to deal with.

« SRI LANKA / WORLD: Under which law did the Magistrate make the order to deport the lady tourist with the Tattoo of Lord Buddha?