INDONESIA/HONG KONG: Proper protection for Erwiana will show genuine respect by the authorities 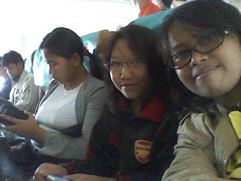 The Asian Human Rights Commission (AHRC) has learned that Erwiana has arrived in Hong Kong to attend a series of medical examinations to support her case against her former abusive employer, Law Wan Tung. However, we deplore the fact that the Indonesian government and the Hong Kong authorities have been treating her more like a prisoner than a victim who needs genuine protection. Upon her arrival on 7 April 2014 at around 4 p.m., Erwiana was escorted by the staff of the Indonesian consulate and the Hong Kong police directly to the Indonesian consulate and told that she must stay there during her visit in Hong Kong. Erwiana was not given any choice but to join them, as she and the team from Indonesia – who has been assisting her continuously since the beginning of the case – were threatened with deportation if they refused to go to the Indonesian consulate. (Photo: Erwiana on the flight to Hong Kong. Courtesy of Riyan)

Upon constant pressure from the civil society organisations in Hong Kong, Riyan and Iwenk were eventually allowed to stay with Erwiana at the Indonesian consulate. However, it has been reported that the consulate staff have let it be known that their presence is not welcome.

Given the fact that the Indonesian government has insisted on separating Erwiana from her team of supporters, we are of the view that the so-called ‘protection’ given by the government is not genuine. We suspect that Erwiana’s case has been politicised by the current government and the incumbent party to gain more votes in the upcoming general election, to be held tomorrow on 9 April 2014. It is therefore not genuine protection but rather a political ploy.