Once again, the Military and the notorious Inter-Services Intelligence (ISI) have intervened to stop Voice of Baloch Missing Persons (VBMP) Chairman Mama Qadeer from revealing the true face of the establishment and raising his voice for the missing persons of Balochistan.

Recently, On 6 March 2015, Mama, along with General Secretary VBMP Farzana Majeed and other female activists were stopped from attending a conference being held in the USA on the subject of enforced disappearances. 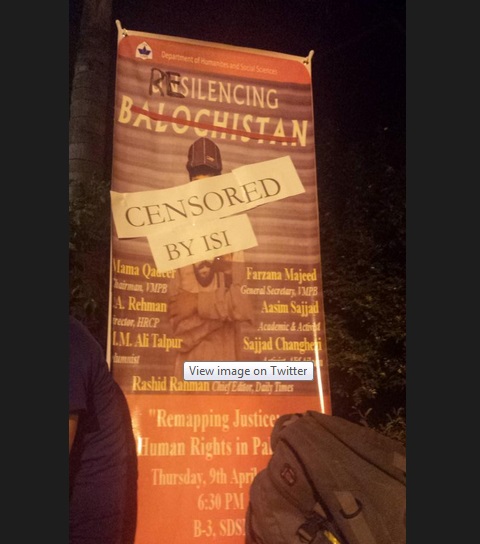 However, allegedly due to pressure form the ISI, the talk was cancelled at the last minute.

According to senior faculty members at the University, two men entered the Vice Chancellor’s office and delivered a letter from the Director General of the ISI demanding that the talk be cancelled immediately or the university should prepare to face dire consequences. They warned the University administration that Balochistan is a sensitive issue and the talk could be used to malign Pakistan.

As if military intervention in matters of the state is not enough, the Military is now bent on muzzling academic discourse on the issue of Balochistan and its missing thousands; this is a direct violation of the freedom of speech.

Both Mama Qadeer and Farzana Majeed have suffered the loss of their loved one’s at the hands of the agencies. Mama Qadeer’s son Jalil Reky was arrested by the State’s intelligence agency, the ISI, on 13 February 2009. The then Chief Minister of Balochistan Province told a delegation of the Baloch Political Party that Jalil was in ISI custody and would be released in some days. But, in November 2011, Jalil’s bullet-riddled and severely tortured body was found dumped on the roadside. Agents of the ISI likewise arrested Farzana Majeed’s brother Zakir Majeed in January 2009. The National Crisis Management claimed that Zakir had been released along with other detainees on the orders of the Supreme Court on 22 January 2010. Yet, Majeed never made it home; to date his whereabouts remain unknown.

The Pakistan Military’s intervention, to silence the freedom of expression, is a direct violation of Article 19 of ICCPR, which states:

Similarly Article 19 of the Constitution of Pakistan states that

“Every citizen shall have the right to freedom of speech and expression, and there shall be freedom of the press, subject to any reasonable restrictions imposed by law in the interest of the glory of Islam or the integrity, security or defence of Pakistan or any part thereof, friendly relations with foreign States, public order, decency or morality, or in relation to contempt of court [commission of] or incitement to an offence.”

Apparently, the Military believes that silencing and muzzling the Baloch voice will cause the movement to shrivel and die, yet the resilience and persistence of people of Balochistan has refused to be silenced. In addition to its important geo-political location, the Province is blessed with nature’s bounties, and is a supplier of natural gas to the whole country. However, the people of the land are kept deprived of their own resources and are forced to live in abject poverty. Decades of military intervention and discrimination on the basis of ethnicity has resulted in unrest and agitation amongst the masses, and many Baloch activists and separatists have been abducted, tortured, and killed to strangle the demand for justice.

The Asian Human Rights Commission condemns the military intervention in the academic debate on the issue of Balochistan and demands that the State conduct an enquiry into the matter. Any intellectual debate cannot be silenced forcefully. The society and its people have a right to have free thoughts and access to information as enshrined in the Constitution of Pakistan.

« SRI LANKA: Independent investigation needed on an extra-judicial killing by the police as a result of torture