We reproduce below copies of the court orders. 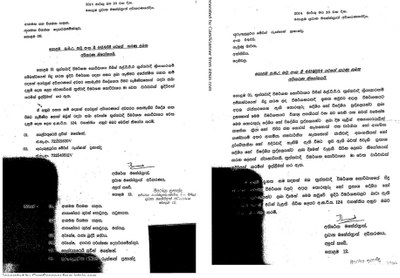 The first order states that, as the Officer-in-Charge (OIC) of the Terrorist Investigation Division (TID) is conducting an investigation into the terrorist activities of the LTTE and that if the information gathered during this investigation is given to local or international persons there will be great damage to this investigation, and by so providing this information there is a possibility that acts of terrorism or conflicts among races or religions can take place. Therefore the OIC of the TID has requested me to make such order for the persons named not to make any such statements. And the Magistrate has made the order accordingly.

In the second order, also made at the request of the OIC of the TID an order has been made to the effect to arrest and produce before court the above named persons if they come for the purpose of travel abroad without the permission of the court.

The Asian Human Rights Commission states that there was no reason in any way to connect these two human rights activists, who have merely done their duty to extend support to any victims or perceived victims of human rights abuses. In fact, the very mandate of a human rights defender is to provide assistance to anyone who is going through such circumstances. The United Nations Human Rights Council Resolution entitled, Protecting Human Rights Defenders, (April 12, 2013) among other things: “Urges the States to acknowledge publically the important and legitimate role of human rights defenders in the promotion of human rights, democracy and rule of law as an essential component of ensuring their protection, including by respecting the independence of their organisations and by stigmatisation of their work”. It was after the TID found them to be innocent of any unlawful activity that both of them were released. The international interventions and those by local agencies were made on the basis of the justification of their interventions as human rights activists. The government responded positively to the massive protest and created the impression of having resolved the problem. The actions which are now being taken to restrict their freedom of speech and to travel have therefore no legitimate basis.

Sri Lankan law protects the freedom of speech as well as the freedom for travel. Both of these rights are considered fundamental rights. Merely tagging on an accusation of some connection to the LTTE without sufficient evidence in order to create the impression of some illegal activity is not becoming of a legitimate government. Unfortunately the long period of violence that prevailed in the country for several decades left room for such arrests without the strict criterion relating to the law. A situation arose when, by the mere signature of an official, the most terrible accusations can be made and these led to the issuing of orders which have enormous consequences.

The resort to such orders now endangers everyone. An officer without providing any reliable evidence to the court may make such requests by which the freedom of any person can be jeopardised.

This action on the part of the TID itself is one more justification for the resolution which is now before the Human Rights Council. When the domestic legal system is blatantly abused the only recourse that a citizen will have is to turn to the United Nations human rights agencies. So far, the belief that the domestic system may still be utilised creates the illusion that justice is still possible in Sri Lanka. However, when the powers of arrest, detention are abused and other severe restrictions of the freedom of speech and movement are being made in this manner it is glaring proof of the justification for the resolution which is to be debated this week in Geneva.

PAKISTAN: Legalising prostitution — the Wisdom of the UN?! »