This is the message the Asian Human Rights Commission sent to Angkhana Neelapaijit on her winning the prestigious Ramon Magsaysay Award for championing the fight against forced disappearances.w 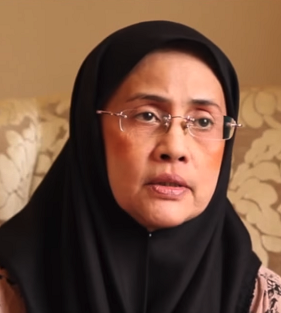 “The Asian Human Rights Commission is very pleased to hear of Angkhana Neelapaijit you getting the prestigious Ramon Magsaysay Award. This is an honour not only to you but also to your husband who paid for his convictions though his own life. It is also an honour for your entire family who has followed the path set out by your beloved husband. It is further recognition of the issue of enforced disappearances as a henious crime and an indirect condemnation of the impunity that was ensured for the perpetrators.

Please accept our heartfelt solidarity with you, your friends in the human rights movement and your family.”

Following is the citation from the Award Committee:

A predominantly Muslim region in a staunchly Buddhist country, southern Thailand has struggled with religious and ethnic conflict since a separatist insurgency rocked the region in 1948. Insurgency and militarization have exacted a heavy toll: it is reported that of the more than 6,000 people killed in the conflict since 2004, some ninety percent of these were civilians. These deaths have included the unsolved killings of more than thirty civil society and human rights activists. One of the more sensational of these killings was the “enforced disappearance” in 2004 of noted human rights lawyer Somchai Neelapaijit, who was abducted in Bangkok the day after he had publicly accused the military of torturing detainees in southern Thailand.

Somchai’s enforced disappearance and subsequent death was a tragic blow to the cause of human rights in the country, and a devastating personal nightmare for his family. But it would also be the beginning of a remarkable journey for Somchai’s widow, Angkhana Neelapaijit, herself a Muslim Thai of humble origins. When her husband “disappeared” Angkhana was a housewife looking after their five young children and a small business. Thrust into a dangerous and public controversy, she valiantly worked to bring the police officers involved to trial, but due to a flawed justice system they were acquitted. Despite the death threats she received, Angkhana continued to seek justice for her husband and other human rights victims. She applied herself to learning the laws, filing legal appeals, and navigating the Thai legal system. She bonded with other victims, and worked with civil society groups in and outside Thailand.

In 2006, with the help of non-government organizations and her own family, Angkhana founded Justice for Peace Foundation (JPF), a network of human rights and peace advocates that has done important work in documenting the human rights situation in southern Thailand, thus raising public awareness and putting pressure on government to act on human rights cases, providing legal assistance to victims; and training women on human rights and the peace process. In a vital initiative, JPF and other groups pushed for laws that will criminalize torture and enforced disappearances (current Thai law recognizes murder only if the body could be found). Their steadfast lobbying succeeded in getting the Thai government to sign and ratify the United Nations Convention Against Torture in 2007, and the Convention to Protect All Persons from Enforced Disappearance in 2012 – already major victories even though the implementing rules have yet to be issued.

In 2015, Angkhana was named commissioner of the National Human Rights Commission of Thailand, the only Commission member with grassroots human rights experience. Despite the skepticism of government critics, Angkhana has taken her appointment seriously, firmly committed to taking the peaceful, legal approach to fighting human rights abuses and to doing what she can in “pushing the limits.” Quietly non-confrontational, she does not waver in speaking her mind against injustice. As commissioner, she has successfully interceded with the authorities for detainees to have access to lawyers and their families, and for victims to get financial compensation. She firmly took action on cases of arbitrary arrest and detention and the exercise of freedom of expression and assembly. She has widened her advocacy to address problems like forced child marriages, trafficking of women, and the rights of asylum seekers and refugees. Angkhana’s term as commissioner ended in December 2018, but there is no doubt she will remain involved in human rights advocacy. This is for her a deeply personal advocacy.

People have marveled at the transformation of this self-effacing housewife into a leading human rights defender. But Angkhana herself is not surprised. In her soft-spoken and measured tone she asserts: “Most women experience conflict and violence in a different way than men. They also develop unique skills for resisting, addressing and preventing conflict. The work on justice and peace cannot afford to neglect the constructive contributions of women.”

In electing Angkhana Neelapaijit to receive the 2019 Ramon Magsaysay Award, the board of trustees recognizes her unwavering courage in seeking justice for her husband and many other victims of violence and conflict in southern Thailand; her systematic, unflagging work to reform a flawed and unfair legal system, and the shining proof she is that the humblest ordinary person can achieve national impact in deterring human rights abuses.

« WORLD: The launching of a new journal, SDG 16