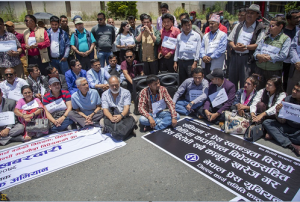 The government of Nepal has been repeatedly throttling the civil society, media and human rights organizations in Nepal. Even the National Human Rights Commission (NHRC) has now come under its ambit. The present government, led by the Nepal Communist Party, does not like civil society questioning its business. In an attempt to silence critical voices, the government is trying to control civic space, and curtail freedom of speech in the country.

The government has registered/proposed an amendment to the NHRC Act, 2012. The proposed bill contravenes the provisions relating to the NHRC as enshrined by the Constitution of Nepal and the United Nations’ Basic Principles for National Human Rights Institutions. The Nepalese Constitution vests primary responsibility in the Commission to protect and promote the human rights of Nepalese people. The NHRC currently enjoys “A” status worldwide, which it may lose if the government pushes through the proposed amendment.

The amendment bill gives discretionary power to the Attorney General to investigate and implement recommendations made by the NHRC (Section 17a), and allows government interference in the financial autonomy of the NHRC. It also proposes the cancelation of the NHRC’s provincial and contact offices, among other things. This will limit the jurisdiction, autonomy and the independence of the NHRC, turning it into a government puppet. The lack of provincial and contact offices will prevent victims of human rights violations and their families from timely reporting to the NHRC and seeking assistance.

In order to maintain the credibility, impartiality, and autonomy of the NHRC so that it can function well, the government must revise the NHRC bill.

Aside from targeting the NHRC, the government has also registered a bill to control the media. The proposed bill seeks to impose a fine of NPR one million on media and journalists including editors, who tarnish the image of any individuals. Another bill on mass communication proposed the confiscation of media equipment, a fine up to NPR 10 million, and 15 years of imprisonment, for media persons who are found to have engaged in publication of contents “undermining national sovereignty and national integrity”. This provision gives the government room to target persons at their discretion. Ultimately, the Press, considered a fourth pillar of the nation, will come under the scrutiny of the nation itself. The bill must be revised without any delay in order for press freedom in the country to flourish.

The AHRC has serious objections towards the government of Nepal for trying to bring in these amendments. They must be revised properly with due consultation, in order to keep democratic space alive in Nepal. The AHRC calls for national and international groups to lobby the Government of Nepal to withdraw these bills. The proposed bills are an attempt to silence critical voices. When there are no critical voices present in the country, the government can run the country under its monopoly; and the human rights, freedom of speech, and freedom of movement of common people will come under its control.

THAILAND: The Attacks of Political Activists »