India’s federal investigative agency, the National Investigative Agency (NIA), recently arrested Father Stan Swamy, a Jesuit Priest, over alleged links with Maoists insurgents. The NIA had been probing him for over a year now in the Bhima Koregaon case in which violence had erupted between the Dalists and the so-called upper caste groups affiliated with the ruling Bhartiya Janata Party and its fraternal organisation. 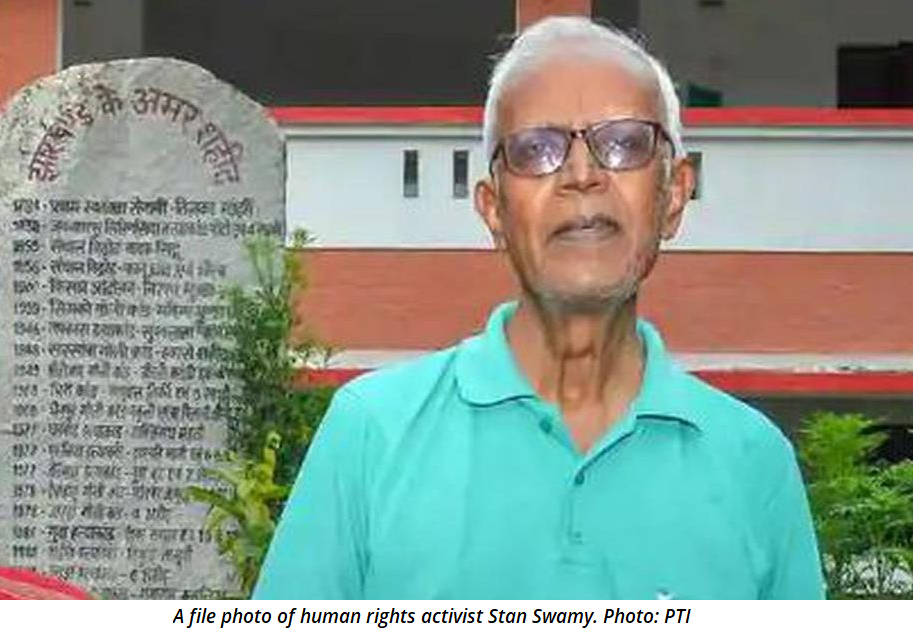 Father Swamy had been targeted by the Authorities in his life-long fight for the rights of the Adivasis. It is best exemplified by his association with the Jharkhand Organisation Against Uranium Radiation (JOAR), a campaign against Uranium Corporation India Limited in 1996. The campaign successfully stopped the construction of a dam in Chaibasa which would have displaced thousands of Adivasi families in Jadugoda’s Chatikocha area. Father Swamy had worked relentlessly for the displaced people of Bukaro, Santhal Parganas and Koderma and continues to work for them today.

Father Swamy had invested his life in insuring the rights of the Tribal people over their lands and forests, as guaranteed by the Vth Schedule of the Indian Constitution. The Schedule stipulates special powers of Governance in scheduled areas inhabitated by tribal people. Along with the mandatory ‘Tribes Advisory Council’ (TAC), composed solely of members from the Adivasi Community to govern such areas, the Schedule allows for greater self-governance in these areas. It makes the Adivasi people owner of their lands and forests. However, the Schedule is often held more in breach than practice and Father Swamy had fought against this travesty all his life. He had long battled against non-implementation of Panchayats (Extension to Scheduled Areas) Act [PESA], 1996 that adds to the Adivasis’ right of self-governance.

His struggles, along with the assertion of the tribal people, led to the Pathalgadi Movement in 2017. The Movement, revived as an ancient and historic tribal ritual of erecting a stone to mark tribal lands, brought him in direct conflict with the State Government. It set in motion the process culminating in his arrest.

Father Swamy took on the cause of the rights of those under trial in Jharkhand. This is seen especially in the youth arrested on charges of being Maoists or having links with the Maoists. In a book titled ‘Jail Mein Band Qaidiyon ka Sach’ (Truth of the prisoners incarcerated in jails), he exposed the arbitrary detention of Adivasi youth and their socio-economic conditions. He exposed the fact that most of the youth were very poor with their family incomes beings less than Rs. 5000 a month. In almost 98% of the cases, in which more than 3,000 youths were arrested on charges of having links with the Maoists, the charges were fabricated. The youth had nothing to do with the Maoists.

His activism invited the ire of the then State Government led by the Bhartiya Janata Party. It led to a witch-hunt against Father comprising raids, fabrication of cases et al. The State Government then booked him for sedition. They raided him twice along with the Pune Police in August 2018 and January 2019.

The hounding and consequent arrest of Father Stan Swamy continues the trend of attacks on human rights defenders and civil society activists–framing them in false cases to curb dissent. That they can do this to Father Swamy, an internationally reputed activist and priest, despite his old age and suffering with Parkinson’s disease, speaks volumes about the deteriorating condition of the Rule of Law in India. His arrest also violates the COVID 19 Pandemic Protocol that prohibits travelling and social interactions for the elderly.

« SRI LANKA: Abduction and demands for ransom by some officers of Kuda oya Police Station

INDONESIA: Monitoring Report on the Police Dealing with Protesters against the Bill on Creation Job »