INDIA: Annual Mystery fever returns to kill dozens, where are the authorities? 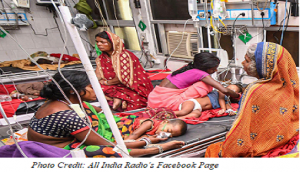 Mystery fevers are no strangers to many states in India. They keep returning, almost annually, leaving a death toll behind. They make news with their onset, media follows the trails, deaths subside and then the trails go cold. Other than this almost orchestrated performance of all the stakeholders barring victims and their families, the only commonality in these mystery fevers is that most of them hit the people in the months of Monsoons. In fact this had once inadvertently exposed the casualness the authorities treat the diseases and their victims alike in the statement of health minister of Uttar Pradesh, the most populous state of India. He had then very nonchalantly said that children keep dying in August (a monsoon month) drawing ire of the people and a rare outrage from media. It is just that ‘rare’ outrage in the times most of the Indian media has become collaborator of the state it did not survive for long.

Though the mystery fever is back again in Uttar Pradesh and Assam extracting a death toll of at least 50, most of them children, the states are by no means the only one to keep suffering them. It is just that the institutional failure in these states is often much bigger a cause of death tolls than the more developed states with a better health system in southern India. Eastern Uttar Pradesh, particularly Gorakhpur region, has since long been a centre of such epidemic outbursts of mystery diseases with Japanese Encephalitis in particular that has a history of extracting death tolls over 1,000 before vaccination for the same brought the toll down.

For instance, even in this case, the diseases is being preliminarily identified as Scrub Typhus, a disease caused by the bacteria Orientia tsutsugamushi, according to the Centres for Disease Control and Prevention (CDC). The National Institute of Virology had first identified the prevalence of the disease in 2017. The public health institutions for sure could have prepared themselves well to tackle the disease and limit the tolls to minimum. Obviously, they did not! And even when they identified the disease, that was after it had already caused considerable harm and claimed dozens of lives, they took time to properly identify it to spread awareness.

That is a foolproof recipe for disaster in the times of a pandemic ravaging the country and the world. The fact that both the diseases share some symptoms like fever, runny nose, headache and so on was not going to make it any easier. It did not.

Blaming the health authorities alone, though, is not justified given the health infrastructure, rather the lack of it in wast swathes of India. The Economic Survey 2019-20 revealed a huge shortage of doctors in the country. The doctor-population ratio in India is 1:1456 against the World Health Organization recommendation of 1:1000. The data, though, tells only half the tale. A huge number of these doctors work in the private sector and are thus available to the poor, in other words the neediest, in a country where out of pocket health expenditure is one of the single biggest reason for people falling in poverty.

Further, as per WHO’s own data, 17.3% of the Indian households are forced to spend more than 10% of their income on health expenditure alone while 3.90% Indian households get forced to spend a whopping, more than 25% of their income on health expenditure! The Public Health Foundation of India (PHFI), a civil society organisation, had found that out of pocket expenditure on health had pushed 55 million Indians into poverty in 2017 alone. The facts that the PHFI was using the official Indian standard for poverty line–a monthly expenditure of Rs 816 (approximately USD 11.16) in rural areas and Rs 1,000 (Aprrox. USD 13.6) in urban areas and this was before pandemic area can easily bring out the gravity of the situation in post pandemic India.

Just to put these numbers in context, the WHO puts the international poverty line at USD 1.90 per day, four times more than what officially recognised Indian urban poor earn per day!

Similar is the story of number of hospitals, including beds in the country. Going by the estimates of the union health ministry and CDDEP-Princeton University, India has only 13.76 beds per 10,000 people. The condition was even worse in the government sector, the only hope of the poor; they have only 5.2 beds per 10,000 people. The study has estimated the total number of hospitals at 69,265 hospitals with 1,899,228 beds across the country. Another study by a housing portal, 69% of these beds are concentrated in urban centres.

What hope, then the poor can have other than seeing the officials deny them services in the name of ‘mystery fevers’ for a very simple diseases, Scrub Typhus, that is already identified and is very easily curable! When there are not enough doctors are beds, even hospitals in the countryside, who can expect them having labs to easily identify such diseases and cure them.

SRI LANKA: The Emergency Powers Of The President & The Situation Of Women »