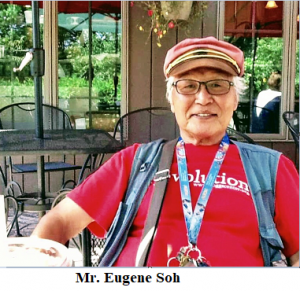 On 16th May 2019, Eugene Soh, a man who dedicated his entire adult life working to defeat the military dictatorship in South Korea, passed away after a brief illness.

Mahatma is a South Asian word meaning great soul. Eugene Soh was definitely a man who had a very great soul, a compassionate heart with a constant commitment to genuine democracy and for ordinary people. It was certainly a great privilege to have been associated with this unpretentious man whose mind was preoccupied with the great problems of our times.

I first got to know Eugene Soh around 1995 during a Youth Meeting organized by him and former Gwangju Mayor Yoon Jang-hyun. The idea of this meeting was to introduce what they called the Gwangju spirit to persons from other Asian countries. It was from then that I gradually learned about the 1980 Gwangju uprising and about those persons who sacrificed their lives to protect and promote of democracy, rather than accept living under a military dictatorship. Gradually I began to realize that this was a great story in the history of democracy, not only of Asia, but of the whole world. From them, I learned the stories about the old cemetery where the heroes of the uprising were buried that became a focal point of gathering for people who were committed to the development of democracy in their own country. Later the bodies of these men, most of whom were young, were brought to the new now national cemetery after the advent of democracy in South Korea. Eugene shared with us a series of video films which showed the 1980 uprising in great detail.

When the uprising took place, followed by the brutal crushing by the military, Eugene was a student studying in the United States. The news of the uprising changed the course of his life. He became a full-time protester against the military takeover of Korea. Thus working to build democracy became the mission in his life.

He would narrate stories about the protests that used to take place in front of the White House whenever South Korean diplomats or Ministers were to visit Washington D.C. He told us about how protesters from various countries, who had grievances about the repression in their own countries, would gather together to support each other during those protests. Eugene had a great sense of humor and one of the stories he related has remained vividly in my memory.

The protesters who used to gather before the White House, included persons from Haiti. One Haitian told their fellow protesters that perhaps what they should do in Haiti was to declare war against the US and then the US would come and destroy the country, and thereafter they would rebuild it. Eugene said smilingly another person from Haiti then asked, what if we were to win? His mind was full of such anecdotes which were gathered in the long years of his being a protester on behalf of his countrymen.

When Kim Dae-jung, who was then the most prominent opposition figure fighting against the military regime came to the United States as an exile, Eugene worked very closely with him, assisting him to carry on his campaign for South Korean democracy.
When democracy was finally achieved, and two former Presidents who were responsible for the massacre in Gwangju were brought to court, tried and convicted, Eugene saw it as the result of the power of the people and human capacity to overcome such formidable obstacles as military dictatorships. His ambitions thereafter were to tell this amazing historical example particularly to the people in other Asian countries, with the view to encourage them to fight for democracy, despite of all odds. He pursued his vision with missionary zeal.

The Asian Charter for Human Rights

Eugene travelled to several countries in Asia in pursuit of his ambition to make people understand the meaning of the Gwangju uprising. In the course of this, he became involved in some of the people’s struggles in these countries.

One such involvement was in Sri Lanka. He became aware of large number of forced disappearances that had taken place in Sri Lanka since 1971 for several decades. He visited Sri Lanka to work with an organization called “the Families of the Disappeared” who were putting up a monument to commemorate lives lost by way of forced disappearances. This monument is located at Seeduwa, Negombo, not far away from the international airport. Annually, the families who have lost their loved ones gather at this place to commemorate their disappeared relatives. In the course of this involvement, he came to know about the widespread practice of torture in Sri Lanka. The Asian Human Rights Commission, together with its partners were monitoring these numerous torture incidents and documenting these stories as part of the education work against the practice of torture and ill-treatment. Eugene, who was a great organizer, visited many of the victims’ houses and talked to them and helped to form an organized group of victims of torture. On one occasion, about 27 severely tortured individuals came for a protest, held at Bullers Road Colombo. The media was invited to interview the victims directly. The result was that even the most conservative press reported those stories in their weekend papers at great length, and thus the problem of torture and ill-treatment became a talking point in Sri Lanka.

One of the victims of torture, or Gerald Perera was a completely an innocent man who had nothing to do with any kind of crime. Gerald was beaten up to such an extent that he suffered kidney failure and went into a Coma. This case received local and international publicity. Later Gerald recovered and filed a case in the Supreme Court for violation of his rights by a way of torture. He won the case, and the Court awarded the largest sum of money as compensation for a torture victim till that time. The Attorney General of Sri Lanka filed an indictment against the police officers who allegedly tortured Gerald under newly introduced torture act. And Gerald was summoned to give his evidence before the High Court of Negombo. A week before Gerald was to appear before the court, while travelling on a bus, he was assassinated by the chief accused police officer with the assistance of another person who had been trained by him. This killing led to protests, and Eugene participated in those protests. A police officer who noted that he was a foreigner questioned Eugene as to why he participating in those protests. Eugene replied: “I am Gerald’s friend, and I came to protest against his murder.” Many of the local activists, who were shocked by the assassination, found encouragement through the presence of Eugene and the manner in which he worked with them during this difficult period.

When the former military dictator’s daughter, Park Geun-hye, was elected as President of Korea, Eugene was greatly disappointed with the voters. Eugene said: “After much struggle, we won democracy, and we were trying to teach that lesson in other countries. But now, what can we tell them?” Eugene saw greedy materialism as having replaced the idealism of the generation that attached so much value to defeating militarism. It was at this stage that Eugene left South Korea and take up residence in Cambodia. A medical clinic was established in Cambodia by former Mayor Yoon Jang-hyun and Eugene assisted in that work. Thereafter he became friendly with so many people that he made Cambodia his second home. He lived a simple life and his needs were few. He was able to adjust to extremely difficult circumstances in a comparatively backward country like Cambodia.

Finally it was there in Cambodia that Eugene fell seriously ill. When his friends in Gwangju learned about his illness, they persuaded him to come to Gwangju for treatment. He finally agreed and came. However by then, he had suffered a lot and very weak. He thought it was best for him to go to the United States as he had become a U.S citizen. However, within a short time of his arrival at his home in the U.S., he passed away.

Another preoccupation of Eugene was to encourage young people to correctly understand democracy and human rights and to contribute to these causes. There are those who followed his advice, and over the years have begun to contribute to those ideals with great dedication.

It was dedicated men and women, like Eugene, who paved the path for democracy in Gwangju city, which has been recognized as a human rights city in the world. He never sought any positions or any worldly rewards for his work.

Eugene has left a rare legacy of someone who carried the torch of democracy and human rights during dark days. I truly hope his example will inspire many others to carry that torch forever.