Home / News / INDONESIA: Press freedom and journalists must be protected

INDONESIA: Press freedom and journalists must be protected

The Asian Human Rights Commission (AHRC) notes that press freedom and journalist protection in Indonesia is under serious threat. Despite the fact that the government commits to support press freedom, media and journalists have yet to fully enjoy such rights. According to Press Legal Aid (LBH Pers), the number of human rights violations against journalists have increased in the last one year; from 47 cases of violations in 2015, the number went up to 83 in 2016, and 63 in 2017. 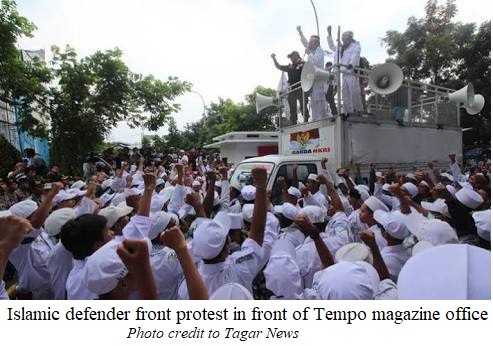 The violations include physical attacks, prohibition to access information, terror and intimidation and also extrusion against journalist. While Indonesia has some regulations in favour of protection of press and journalists, such as article 351 of the Penal Code on serious maltreatment, Law No 39 of 1999 on Human Rights, and Law No 40 of 1999 on Press, these have yet to be effectively applied to ensure protection of journalists and press.

The following case studies describe the picture of journalists and press freedom in Indonesia. These cases have become public and media attention because the pattern and the form of these cases represents the majority of human rights violations against journalists in Indonesia. The cases also indicate the government’s lack of effort in addressing the issue of press freedom and threats.

According to the Independent Journalist Alliance (AJI) of Moluccas province, after journalist Sam Hatunia took a photo of Moluccas Governor, Mr. Said Assagaf along with other local government officials and members of political parties on 3 April 2018, the governor forced Hatunia to delete the photo. When another journalist and chairperson of the AJI, Mr. Abdul Karim, saw Hatunia being intimidated, he warned the governor’s supporters to stop intimidating journalists. As a result, one supporter, Mr. Abu Bakar Marasabessy, came to Karim and slapped his face twice.

Earlier, on March 16, a group from the Islamic Defender From (FPI) and Islamic Defender Troop (LPI) held a protest in front of the Tempo Magazine office. They protested over a cartoon featuring a man dressed in white sitting opposite a woman at a table. Although the cartoons do not mention who the characters are, the FPI thinks the picture insulted Rizieq Syihab, an FPI leader who escaped to Saudi Arabia, after the police investigated the case of sexual chat allegedly involving him. Therefore, they forcibly demanded that Tempo Magazine apologize for the publication of the picture. Finally, due to massive pressure and intimidation from the protesters, one of the representatives of Tempo magazine, Mr. Arif, delivered a speech.

Last year, on 20 October 2017, a journalist of Banten Post, Mr. Panji Bahari, was brutally attacked and arrested by police officers of Serang City Police Office (Polres Serang Kota). At the time, Bahari was covering a demonstration about three years of President Joko Widodo’s dministration. According to Bahari, somebody suddenly pushed him into the middle between protesters and the police, then he was kicked, beaten and punched, as well as called a ‘provocateur’. He was unable to say he was a journalist, as his neck was being strangled. Later, Bahari was pulled by a police officer and brought to a government office in front of the Islamic University. When Bahari showed his journalist card, instead of releasing him, the police punched him again. Subsequently, Bahari was brought to a police vehicle, where he was punched again, with the police calling him a ‘provocateur’. The police also continued to threaten him.

The AHRC notes that investigations of these cases remain unclear until present. Considering the lack of protection of the right to freedom of opinion and expression, and the repeated persecution against journalists, we request the government of Indonesia to seriously guarantee press freedom and protection of journalists. Further, the law enforcement agency and judicial system must be able to address various cases of human rights violation against journalists under fair trial principles.

The government, in particular the Police, the Press Council and the National Commission on Human Rights (Komnas HAM) must take a lead to address the threats faced by the press and journalists. Further, the government must also seriously implement its commitment to provide press freedom in Papua and West Papua provinces without any exceptions.

SRI LANKA: Why this Obeisance paid to Politicians in South Asia? »