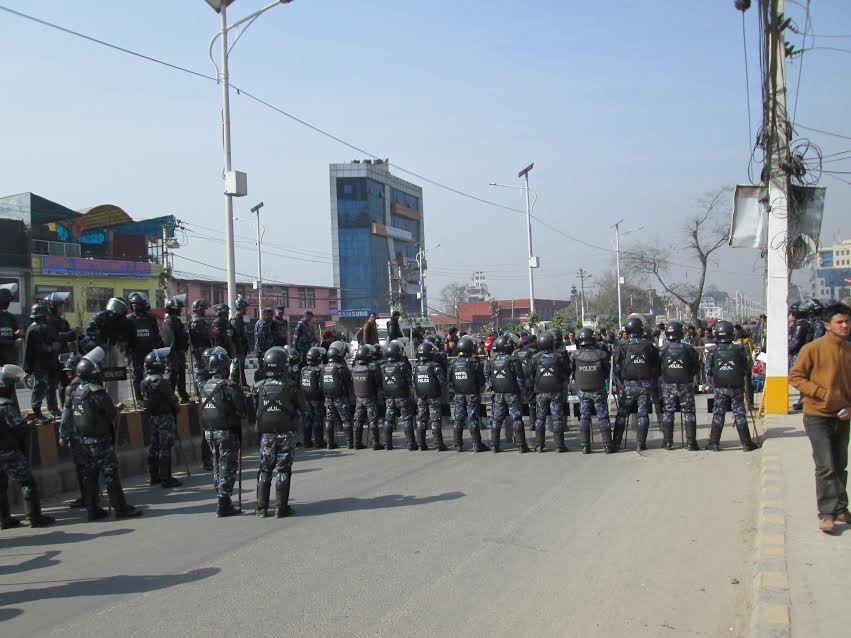 The Asian Human Rights Commission (AHRC), in coordination with the Terai Human Rights Defenders (THRD) Alliance, has been monitoring the human rights situation in Nepal in the lead up to 22 January, the deadline for the Constituent Assembly (CA) to draft a constitution. The Maoists, along with the alliance of 30 opposition parties, have resorted to unruly protests inside Parliament and out on the streets, bringing the nation to a standstill. This has upturned the life of citizens, who are tired of having to bear the brunt of yet more “bandhs”.

The collective failure of the first CA in Nepal meant the nation was compelled to have another CA election. During the second CA election, the political parties declared a self-imposed deadline of bringing in a new constitution in one year and, as per their pledge, the CA has prepared its calendar declaring that a new constitution would be promulgated on 22 January 2015. All major political forces had averred that they would try to draft a new constitution on the basis of consensus. But, as the deadline to promulgate a constitution neared, the gulf between the ruling and opposition parties on the content has widened.

The 30-Parties’ Alliance declared a Terai-Madhes strike on 12 January 2015. Supporters staged torch rallies in almost all the districts of Terai in he evening on 11 January. Monitors found violations of citizens’ right to protest in Kalaiya, Bara District, on 11 January. A dozen protestors were injured in a police baton charge. Mr. Pramod Gupta, a member of the Madhesi Janadhikaar Forum-Nepal (MJF-N) is one of the injured. On 12 January, almost all the districts of Terai observed strike. In Janakpur, Dhanusa District, cadres of different political parties representing the 30-Party Alliance marched together to make the strike successful.

During the protest at Bhramarpura Chowk in Janakpur, Mr. Rajaram Jha, 26, a resident of Ekrahiya, Mahottari, died. Protestors have claimed that he died due to police beating but the Nepal police have stated thathe died of a heart attack. A team of doctors at Janakpur Zonal Hospital conducted the postmortem. As of 20 January, the report remains undisclosed.

The organisers announced another strike the following day (13 January) to protest against police brutality. The protestors angrily demanded that Jha be declared a martyr. During this demonstration, the protestors burned a motorbike under the possession of the Nepal police.The protestors have claimed that three women protestors were beaten up and that the police fired three rounds of tear gas. Santoshi Mahato, a Constable of Area Police Office Dhalkebar, Dhanusa, was injured as a result of the protestors hurling stones at the police.

The THRD monitoring team found that the police had used excessive use of force in Bhairahwa, Rupandehi District, on 12 January. According to the protestors, Rajesh RanjanVerma, the District Coordinator of Terai Madhes Democratic Party (TMDP), fractured his hand when police baton charged the protestors.

In Banke District, three protestors were picked up from Kohalpur and detained in the Area Police Office Kohalpur. The police claimed that the three protestors had been pelting stones at different vehicles. The names of the three detainees are Ram Prasad Giri, Mahesh Basnet, and Dulu Budha. They are from Kohalpur, Banke District; Kalagaun, Salyan District; and SirishGain, Mugu District; and are aged 12 years, 9 years, and 8 years, respectively.

Excessive use of force by the police was also witnessed in Siraha District. As the 30-Party Alliance declared a general strike on 13 January, police escorted night buses in Siraha. As the police were escorting the buses, some protestors pelted stones at the buses. Following this, the police resorted to baton charge. In this incident, Mr. Prayag Yadav, local MJF-N leader, and Mr. Rajkumar Shah, local UCPN-Maoist leader, were injured. Shah had his leg fractured, and Yadav suffered a bruised back and legs. The police confiscated a digital camera of Mr. Dilip Singh, a local reporter fo rNayaPatrika, a daily newspaper, without providing cause.

As a result of these incidents in the Terai, 19 January has been declared as the Balidaani dibas (remember the martyrs day). Accordingly, on 19 January, the Alliance For Independent Madhes (AIM) organized a programme in Lahan, Saptari District, to give tribute to the “martyrs”. A welcome gate was constructed and Sahid Chowk was decorated for the event.

The police, however, destroyed all the decoration and the welcome gate and did not let the people enter the venue. The police picked up Chandra Kant Raut, AIM Coordinator, from the venue at 4:30 p.m.,following which the situation deteriorated. People started hurdling stones at the police and consequently the police fired 6 rounds of tear gas to scatter those assembled. The police dropped Raut at his home at 9:30 p.m. the same day.

The protestors in Mirchaiya, Siraha District, have also reportedly torched the van of the Kantipur newspaper. The protestors also set the District Party Office of CPN-UML in Rajbiraj on fire during the strike observed on 20 January.

The AHRC and the THRD Alliance call upon the government of Nepal to stop the police from employing excessive force. On the other hand, the Maoists and the 30-Parties Alliance should also desist from using violent methods of protest and stop vandalising private and public property.

The general strike has affected the lives of the people. The political parties should return to table for discussion, and release a draft constitution on time. The Nepalese people have been waiting for a constitution for too long now. The citizens need a constitution that works for all, addressing the fundamental aspirations of Dalits, women, Janajatis, and Madhesis.