Contrary to the incumbent government’s electoral promise of doubling farmers’ income, India’s agricultural crisis has deepened, with the farm income growth rate hitting an unprecedented 14-year-low in the last financial quarter of 2018. At 2.67 percent in real terms (constant price), it is the worst growth since October- December 2004. To worsen matters, the nominal (at current prices) growth rate has grown even lower- at 2.01 percent in the same quarter, down from the unacceptably low 3.37 percent in the previous July to September quarter. 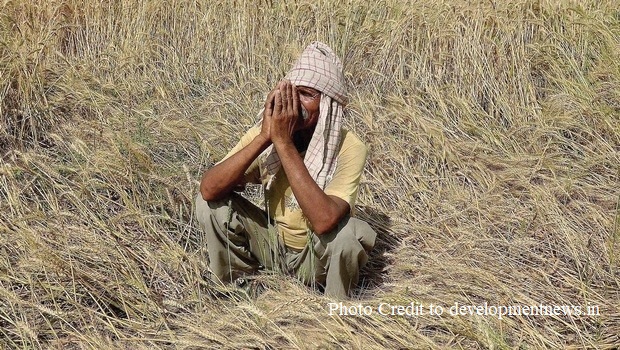 Indian farmers have been reeling under an almost four-decade long farm crisis that has already claimed over 3,00,000 lives. The current low income growth is another blow for them, and yet there seems to be little concern or action by the Indian government to counteract this.

In fact, there has been little effective action taken by the Union Government since the Dalwai report of 2016 made concrete recommendations regarding improving the country’s agricultural sector. The Committee for Doubling Farmers’ Income formed under Ashok Dalwai in April 2016 concisely noted the real state of Indian agriculture and all that was plaguing it. It identified exactly what needed to be done to double farmers’ income- essentially asking for three things- reduction in the cost of farming, gaining productivity and remunerative prices:

“At the basic level, agriculture when defined as an enterprise comprises two segments–production and post-production. The success of production as of now amounts to half success, and is therefore, not sustainable. Recent agitations of farmers (June-July 2017) in certain parts of the country demanding higher prices on their produce following record output or scenes of farmers dumping tractor loads of tomatoes and onions onto the roads or emptying canisters of milk into drains exemplify neglect of other half segment of agriculture.”

Yet, even while announcing hikes in the Minimum Support Prices (MSP) of a few crops, the government essentially did little for the post-production part; 2018 saw the same scenes of farmers throwing truckloads of tomatoes on the roads, spilling milk and so on. They in fact did something more this year. Some of them sent the almost insulting prices they got for their produce- like Rs 1064 (USD 15) for 750 kilograms of onions- or USD 0.02 cents per kilogram to the Prime Minister’s Office as contribution to some cause.

Moreover, the declaration of MSP on certain crops does not actually guarantee that the farmers will in fact get the MSP. Many reports have noted that they often do not get the MSP, more so after bumper harvests, and thus have to sell their produce for far less prices. The reasons behind this are many, but the urgent need for cash coupled with few storage options are the main culprits. The lack of cold storage particularly affects perishable produce, leading to tomatoes featuring in reports of abysmally low prices.

Other decisions of the government, like the sudden demonetisation of high value bank notes in a country where agriculture operates mostly through cash transactions, did not benefit the farm sector either. They in fact hit the farmers hardest.

Clearly, promises cannot be fulfilled without concrete actions taken on the ground. This is where the authorities are the weakest, having taken almost no action on the recommendations of the Dalwai Committee report.

The only way to fight the farm crisis is to invest in agriculture with a focus on sustainable production, logistics and building a non-exploitative post production market system that doesn’t exploit the farmers’ need for cash by forcing them to sell their produce cheap. This will require a comprehensive strategy and investing into rural roads, irrigation, storage (including cold storage) and over all rural development.

That, in turn, will require huge investments into the agriculture sector, almost three times more than what it is at present, to double the farm income; Rs 6,40,000 crore as per experts. Again, this does not seem to figure in the authorities’ list of things to do. Even in its Interim Budget for 2019-20, the government of India allocated only Rs 149, 981 crore for overall agriculture along with allied activities, a far cry from what the sector actually needs.

« SRI LANKA: Open letter to the Honourable Speaker of the Parliament on the murder of two businessmen Rathgama Bussa area and General state of murder in the Island