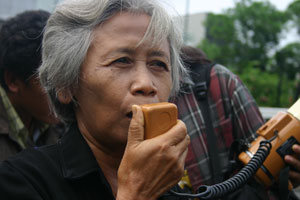 The Asian Human Rights Commission (AHRC) is writing to urge you to conduct an investigation to follow up the recommendation of the National Commission for Human Rights (Komnas HAM). With regard to the commemoration of the Semanggi I case on November 13, we also wish to remind the national and international community that this case is not finished yet. Despite more than eleven years of political reform there is no progress in the settlement of past human rights abuses, in particular, the cases of Trisakti, Semanggi I and II, during which students who called for reforms in Indonesia were killed and injured by the armed forces. (photo on right: Mrs. Sumarsih, mother of a student killed at demonstration in 1998)

So far, stagnation of the law process has caused inconsistencies in the office of the Attorney General (The AG) with regard to the interpretation of Law No. 26 of 2000 regarding Human Rights Courts. In particular article 43 paragraph 2 mentions the recommendation from the House of Representatives to establish an ad hoc Human Rights Court for gross violations of human rights that were perpetrated before 2000. In previous experiences, such as for the cases of East Timor in 1999 and Tanjung Priok in 2003, the AG interpreted the law No. 26 of 2000 properly and followed up the recommendation from the Komnas HAM through investigation directly instead of requesting a prior recommendation from the DPR to do so.

The Constitutional Court, through decree No. 18/PUU-V/2007 from February 21, 2008, regarding article 43 of Law No. 26/2000, reinterpreted the article so that mere allegations of gross violations of human rights were not a sufficient basis for the parliament to establish an ad hoc Human Rights Court. Instead, a case has to be judicially investigated by the AG before such action can be taken. To fulfill this requirement, the Attorney General has to conduct an investigation before being able to present sufficient information to the Parliament to enable it to establish such a court.

Overview Case of Trisakti and Semanggi I and II 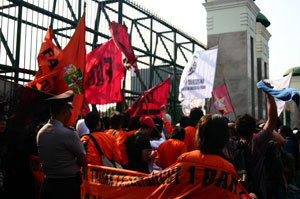 On 12 May 1998, four students were shot dead by armed forces at the University of Trisakti in Jakarta during a demonstration to urge political reform. (See appendix). On November 8  14, 1998 the armed forces conducted violence against students and civilians during a demonstration to reject the Special Session of the House of Representatives (DPR) which was assumed unconstitutional and urged the President to address the economic crisis at that time. The armed forces opened fire and as a result, more than 14 students died and 109 people were injured (see appendix for a list of victims). On September 1999, the armed forces shot students who voiced their rejection of the National Security and Safety Bill (see appendix) (photo on left: student protest in Semanggi / Jakarta in 1998)

Latest progress
In 2002 Komnas HAM announced in their inquiry report that the cases of Trisakti, Semanggi I and II were classified as gross violations of human rights which invokes Law No. 26/2000, including the responsibility of the AG to investigate, and Komnas HAM sent the report to the AG. However, to date, the Attorney General has refused to follow up the recommendation to establish an ad hoc human rights court.

However, there has been little progress after the House of Representatives on September 28, 2009, issued a recommendation to the President to establish an ad hoc court referring to the recommendations of the special parliamentary committee for enforced disappearences.The AHRC requests that

The AHRC through this letter calls for the Attorney General to follow up recommendations from Komnas HAM without delay and also consider the recommendation from the DPR to commence investigations in all other cases submitet by Komnas HAM. ‘