“The Holy Quran enjoins us to reflect on the verities of Allah’s created laws of nature; however, that our generation has been privileged to glimpse a part of His design is a bounty and a grace for which I render thanks with a humble heart.” Mohammad Abdus Salam

The issue of Ahmadi’s in Pakistan appears to be more important than honouring the life of the country’s only Nobel Laureate.

Dr. Abdus Salam passed away on November 21, 1996 in England at the age of 70. He was the country’s only Nobel Laureate and won the prize in 1979 for his work in theoretical physics and for his discovery of the ‘God’ particle. Dr. Salam was the first Pakistani and the first and only Muslim to receive a Nobel Prize in Physics. He contributed heavily to the rise of Pakistan to the physics community of the world.

Sadly, instead of honouring a son of the country the government is ignoring the call for tributes to appease the religious extremists because Dr. Salam was an Ahmadi.

It was during Zia-ul-Haq’s oppressive rule when Ahmadis were banned from calling themselves Muslim and building their mosques in the Islamic Republic. Their places of worship were shut down or desecrated by hard-line Islamist with the support of the state. 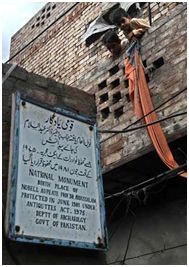 (PHOTO: The house once inhabited by Dr. Salam, once a national treasure and now in disrepair. The plaque shown in this picture has now been removed.)

In the town of Alloway, Scotland, the cottage where the famed poet, Robbie Burns lived has been preserved for future generations. It is now a museum honouring the life and times of the ‘Bard’. Sadly no such honour has been paid to the house where Dr. Salam resided. Instead of being preserved as a mark of honour it has been allowed to fall into disrepair and the local residents hang their washing from its crumbling walls; a deliberate snub to show that Ahmadis, scientists and Nobel Laureates have no place in Pakistan’s history and culture.

Likewise, his headstone was vandalized. It originally read: The first Muslim Nobel Laureate Dr. Abdus Salam. After the vandals were finished it now reads only: Dr. Abdus Salam. The pity of this is that the government shows no reaction whatsoever to the actions of the extremists to belittle his work. There has been no investigation into the vandalism and to be honest, none is expected. This speaks to the apathy of civil society and the institutes of higher learning in that no one has taken notice of this. Does this mean that the country looks upon Dr. Salam as an award winning scientist or as an Ahmadi? Should they not, in fact, be looking upon him as a great man of science who worked for the betterment of his society?

It is a shameful situation in that Pakistan has shown no willingness to respect the scientific achievements of one of its own citizens. Indeed, Dr. Salam’s community has contributed more to the creation of Pakistan than any other religious sect or group. The only heroes of the country are the soldiers that are supposed to be guardians of its sovereignty, the Jihadist that operate with the full knowledge of the government to protect the ‘purity’ of Islam, there is no time for the scientists who work to enlighten society and who wish to run the country on scientific knowledge. They are treated as nothing and when their usefulness is over they are thrown on the rubbish tip.

It is the history of Pakistan that those who have usurped the rights of the people and killed thousands eventually surrender before their enemies. These are the people who are treated as ‘heroes’. There is no room for academics in this category. Academics are only seen in the form of their religious and sectarian affiliations.

Despite Dr. Salam’s prestigious career and service to his country the government shows no sense of gratitude. In a career spanning 45 years he worked tirelessly to promote training and research into physics. He worked as one of the science advisors to the government from 1960 to 1974 and played a major role in Pakistan’s science infrastructure. It would of course, be possible to list all of Dr. Salam’s accomplishments but that would just add weight to the argument that the government of Pakistan has turned its back on a man that dedicated his life to the betterment of his country; a country that disowned him because of his faith. In 1974 Dr. Salam, dejected, left Pakistan after the parliament passed a bill declaring the Ahmadiyya sect as non-Islamic.

In her speech to the United Nations at the Periodic Universal Review, the Foreign Minister, Ms Hina Rabbani Khar, talked in flowing terms of the progress Pakistan has made in the past four years in furthering human rights in the country. However, her speech was significant not for what she said but for what she did not; areas which she conspicuously avoided. One of those areas was the harassment and abuse meted out to the Ahmadi community. It is bad enough when the harassment is meted out to the living, but how sad is it when even the dead and buried are abused.

Though Dr. Salam has been treated as persona non grata there would have been hope for Pakistan’s civil society in the person of Malala Yousufzai, the young girl of only 15 who stood up the religious extremists and fought for her right, and the rights of other girls of the country to an education. She is the example that Pakistan’s civil society should be following. Malala herself has now joined with Dr. Salam in the group of persons that are ‘persona non grata’. She is said to be pro-American and some state organisations have also joined in the chorus of hatred towards her. A Muslim group in the United Kingdom, where Malala is undergoing treatment for the gunshot injuries she sustained during the assassination attempt on her life, also declared her eligible for assassination. The group has been angered by her public comments in support of the occupying US forces in the region and her mocking of the hijab and jihad. The group plans to announce the fatwa on November 30 at a mosque which was previously raided by British forces due to its religious extremism.

It is yet to be seen if the UK government will take further action on this mosque and the group which is based in the country. This raises the question as to how long the British government is going to remain silent on the matter.

With regard to the silence of the Pakistan government in the matter of Dr. Salam it is the organs of the state that are allowing this to happen. If the government would cease its policy of appeasement towards the religious extremists and the armed forces there would be more respect shown by all to the true heroes of the country. These heroes are not the Jihadists and hate mongers, they are the people who have worked and continue to work for the betterment of the people and humanity in general.

If the government is not prepared to hold up Dr. Mohammad Abdus Salam as a national asset it is better that they declare him ‘persona non grata’ so that once and for all he can be deleted from the history books.

SRI LANKA: The Supreme Court requests the PSC to withhold the impeachment inquiry  »