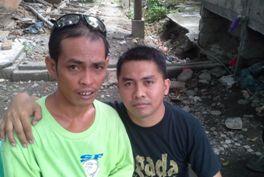 While inside a bookstore in a city in southern Mindanao, I saw a booklet containing the biographies of modern Filipino heroes. Their names are not new to Filipinos. In fact, their photographs and their work are displayed in museum exhibits, the streets and public owned buildings even bear their names.

One biography of those in the booklet was Macli-ing Dulag, the articulate leader of the indigenous tribe who fought for the emancipation of his people in the Cordillera region, northern Philippines.

But the person I will write about here is not on Macli-ing, but Loreto Cambo, an indigenous leader in Malalag, Davao del Sur, whom most Filipinos would not know.

Loreto is not Macli-ing, but he knows full well the suffering of his own people. His name is not listed in the biographies that I saw at the bookstore because neither is he dead nor have other people written about him. He does not speak English, a medium of language most Filipino intellectuals are comfortable enough to write about a person’s heroic struggle. Loreto would have to speak to you or anyone who wants to hear his and his people’s stories, even though his hands shake due to nervousness as he is not used to being interviewed.

Loreto would be silent at first and not speak to you. Not because he doesn’t have anything to say, but because he might be overwhelmed trying to decide which story to tell you first. He is a story in himself; he is the evidence of the unwritten history of his indigenous tribe, a living biography and so on. In his own way, he would explain, in a manner that he thinks you would understand, how he, his wife, his children and his people hardly eat as they walked over huge ancestral lands that they were told are theirs. It’s their land but they cannot cultivate it.

Loreto leads the Taga-Kaulo indigenous tribe in the mountains of Davao del Sur in demanding the return of their ancestral lands. Deprived of adequate education in mountain villages, he articulates how he, his wife and children, suffer; and tells you why they do not deserve to suffer. He told me the reasons why he believes this:

“Our ancestors say we own huge land, but why do we just weed (clean up) farmlands of others to get money to feed our family?”

I don’t have the answer, and certainly I could not answer Loreto’s question. But I’m sure, the modern Filipino heroes listed in the booklet, the like of Macli-ing Dulag, would agree with me that Loreto’s question is what they fought for. That, 27 years after the Marcos dictatorship ended it should not be necessary to ask such questions. But, they are still being asked, not only by Loreto’s people but many other indigenous people engaged in an ongoing fight, either to reclaim their ancestral lands or prevent the incursion of commercial corporations.

The good thing about the booklet I saw and bookstore selling it is that these biographies are coming out from the library shelves where they usually collect dust; second, they are a reminder to us Filipinos as to what these people fought for on our behalf; and thirdly, a question as to whether or not we have seen the fruits of their struggle, or have had to continue the struggle for what they fought for.

However, in the Filipinos’ way and its nostalgia of honouring our heroes, we tend to forget that many nameless Filipinos still endure, struggle and relive what others have left, as we speak. To me, the heroes are not dead, they still lived with us.

Loreto’s story is one of the many stories of the nameless, but whose life is certainly not irrelevant. They continue to test our democratic aspirations and ideals. His story not only remind or tells us about what equality, freedom and democracy ought to mean, but also raises fundamental questions as to whether our society has really lived up to it. I’m sure Loreto and his like are not known to many, they are not in the biographies of modern Filipino heroes, but his person, his struggle and what he believes in, contributes to the democratic space we have now.

However, while Loreto’s person contributes to the democratic space that Filipinos are enjoying; our government institutions, notably the National Commission for the Indigenous People (NCIP), a government body created to protect the interest of the indigenous peoples to their land, are denying, if not depriving them of this space. The lengthy and long overdue delay in affirming their claims to their land cause so much pain, suffering and uncertainties for Loreto’s and the future of his people.

In absence of the support of our institution in giving Loreto and his life democratic space, I do think that it is us, the Filipinos, who have the moral responsibility to stand up for him. In the words of the wellknown Burmese leader, Daw Aung San Suu Kyi, “Use your liberty to promote ours.” If interpreted in our local context, for well off Filipinos for the oppressed Filipinos. By writing and telling their stories, we remind ourselves that they are human beings, like us, who aspires to equality, freedom and fairness.

I pay tribute to him and many other Filipinos, whose very own existence, continue to challenge our country’s social and political system. Whatever democratic space our society has today, we owe this to Loreto and people like him. May your names be known, stories be told and your aspirations come to reality.

INDIA: “Recognize and protect the rights of human rights defenders of Manipur” »