“Liberty is meaningless where the right to utter one’s thoughts and opinions has ceased to exist. That, of all rights, is the dread of tyrants. It is the right which they first of all strike down.”
— Frederick Douglass (1860 speech in Boston)

The tread of hundreds of thousands of feet walking across the country in search for the liberty of education has ended (as has the lives of two students in the process) at the Ministry of Economic Development, one of the ministries headed by a brother of the president. The Federation of University Teachers Association (FUTA) had the ‘opportunity’ to sit with the minister of the subject at his high security compound and receive his ‘political’ answers. Later, they met the Secretary of the Treasury, P.B. Jayasundara, who tried to explain the real facts and figures that comprise the banana republic, now world famous as a laboratory of nepotism. 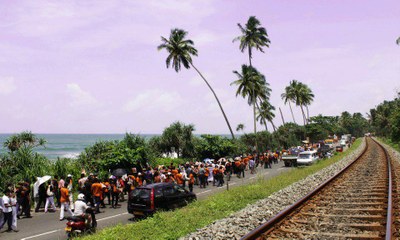 However, things are still unstable and unclear. Even the president of FUTA, who spoke to this writer earlier this morning, does not have a clear idea about the ruling family’s policy towards the education crisis. And this is after one of the longest union actions in the recent history of Sri Lanka.  It is obvious that the President of the country is ignorant of the concept of good governance; his chief political strategy being nothing more than using the armed power under his control or simply killing time until all that oppose get tired and give up. Today, what we are witnessing in the name of politics is that sincere ignorance and conscientious stupidity, which, as Martin Luther King, Jr. remarked, comprise the most dangerous scenarios.

As this writer has repeatedly pointed out, the basic foundation of politics in Sri Lanka is embedded in habitual lies and vulgarism. These are the core tactics which the government is using to stay in power. Spreading baseless gossip against opponents has become a very important strategy not only for keeping up its reputation but in undermining the truth. In this context, popular politics has sincerely ignored the political wisdom, eventually overlapping with popular cultural aspects rather than organizing within the framework of the rule of law.

Generally, politics has more connection with culture than with legalities and because of this an idea of “social change” entered into the discourse where social moments originated. It was the revolt against the “culture of silence.” Our culture is based on a pyramidal hierarchical chamber, which is always allowed to dominate and undermine the people who are at the bottom of the hierarchy. Caste has registered a system where freedom has no room. We do not have common authentic acceptance on conditions for justice. We value human beings according to the place they have in the hierarchy. Religion came after culture, but reality was too harsh; religion has been adapted into cultural acceptance and habituates each of the communities. The whole scenario has been based on one question, which is, abstaining from the rule of law and the habitual cultural deviation from the rule of law.

In this circumstance, the idea of “no alternative if we lose the present” has rooted into our system, becoming part of the culture even after colonial inventions in the sixteenth century.  The rule of the country was based on the emotional intention of the king, people’s rights were none other than what they received by birth. No one has dared to challenge the “power centric system”, preferring to rather obey everything. The idea to struggle against “absolute power” or the “royal absolute” was the first time questions rationally arose. This was during the end the colonial times, courtesy the social change that occurred in Europe over the ferment of the industrial revolution, though there were minor incidents reported in ancient times, which were basically identified as “power struggle between brethren.”

We never fought to change the system. We fought to protect the system on behalf of the kingdom, while people who really wanted to change the system were labeled as “nation traitors.” Basically, we did not have courage to fight against authoritarianism and unjustness until the British established a system based on the electoral process. This was developed up to a certain extent, but our own politicians were unable to read meaning into it. As a result, the electoral process has become a cynical manipulation of power and believing in the system is nothing but infantile. In this context, politics has become agitation without visionary political ideology. The very core reason behind this failure is that we do not extend our knowledge to understand the importance of dissent or collaboration of voluntarily work in politics.

FUTA entered into society in this prevailing situation. That is why many people started to believe that FUTA itself had tremendous opportunity to change the system. Perhaps many thought it had the capacity to re-construct authentic dissent in this country.  Creating dissent is absolutely dependent upon voluntarily based social movement and there is a minimum role to play in the political parties in this country. It will be another betrayal if FUTA were to lose their voluntary-based battle just for “politics of vulgarism.”

« BANGLADESH: Citizens and the UN deceived