INDIA: “Swachh Bharat Abhiyan” and the filth of democracy 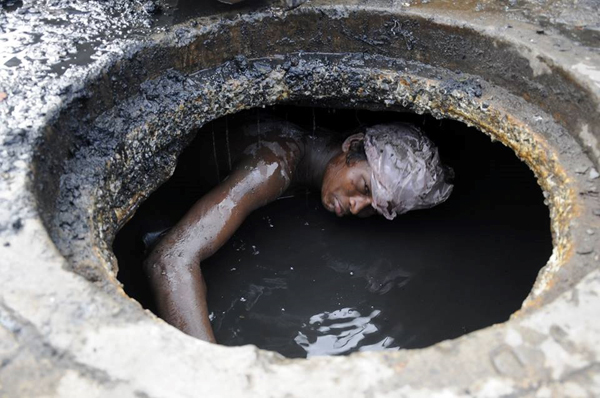 No, the man pictured here has not entered the gutter as part of Prime Minister Narendra Modi’s much hyped Swachh Bharat Abhiyan, or “clean India campaign”. Unlike the ad rush that shows posing with the broom, he could not have entered the gutter to preach the country about the virtues of cleanliness.

He is, in fact, indulging in a practice outlawed time and again by both the legislature and the judiciary of the country, most recently on March 27 this year. The Supreme Court had outlawed manual scavenging yet again and ordered all state governments to strictly enforce the provisions of Prohibition of Employment as Manual Scavengers and their Rehabilitation Act passed by Indian parliament in 2013. Yet the practice continues as exposed by this photograph taken by M. Srinath of The Hindu in Chennai, not some nondescript village tucked away in remote areas.

Furthermore, this is not the only picture to expose the failure it illustrates. There is hardly a day without news of manual scavengers dying of asphyxiation in gutters across the nation. Last time we reported  a case from Hyderabad. Before that it happened in Surendranagar in Gujarat. Earlier still, was a case from Varanasi, the parliamentary constituency of the Prime Minister. These are only the cases that make it into the media. There is hardly any data on such deaths, but activist S. Anand estimates that at least 22,337 persons engaged in some kind of sanitation work die in India every year; 1 to 2 of them literally dying in gutters every day.

Going by the law and Supreme Court order, the administration must be completely aware of these deaths. The Supreme Court had banned entering manholes completely unless in acute emergencies. It had further made written approval of the chief executive officer (or whatever name the head of the civic body goes by) mandatory in those emergencies. It had also ordered that such persons should be provided with full protective equipment.

The picture shows how earnestly the state governments are following the order in the capital cities, leaving us to imagine how bad it must be further out of view. The man appears bare bodied, though he must at least be carrying a rod not visible in the photo. That is all he has, no mask to protect him from the poisonous gases that fill  these death traps. He is not tied with a protective rope that could be used to pull him out in case he  loses conscious; instead his comrades will be forced to enter the same death trap to pull him out and risk dying themselves. Yes, that is the recurring narrative of deaths in several stories in the media. “Two safai karamcharis die while cleaning manhole” was a Times of India headline on April 18, 2011, “Sanitation workers die in septic tank” was The Hindu’s on January 16 this year.

There is no dearth of news about workers dying in manholes, but one can hardly find any on the follow up. Search the archives of the media houses or internet; dying from a lighting strike seems more likely than finding punishment for those guilty for such deaths. This is despite the Supreme Court having fixed the command responsibility for such deaths with the chief executive officer. There are many reasons behind the clear disdain for the lives of manual scavengers as well as for the Supreme Court order that these cases exemplify, but India’s rotten criminal justice system is one of the most significant.

Almost completely inaccessible and unaffordable for the poor while having a decades long backlog of cases, who in his right senses would think of approaching the courts seeking remedy? What are the chances of one getting justice even if he is adamant enough to try? In many of such cases the administration begins with shirking off their responsibility. They often begin by feigning ignorance about the employer, about the victim and even about the work, as they did in the case of death of Pawan, a sanitation worker in Varanasi. (Link Here) They will often assert that it was not they but private citizens who employed the victim. The question is: who is responsible if they are not? Contracting out the work is routine in these neoliberal times but can the principal employer so easily avoid its responsibilities in the eventuality of serious harm to a worker? How can they give work to such agencies or contractors and simply claim that they do not even know whom they employ? And finally, providing sanitation services is the responsibility of the state, isn’t it?

It is time the judiciary wakes up to follow up its own orders as the executive has proved that it will not, at least not for the manual scavengers. The executive perhaps does not need them, a tiny community with very small numbers and therefore dispensable in the first past the post democratic system. They will keep having their missions to moon and mars as those appear to the upwardly mobile middle class, (nothing wrong about that per se), but no need for investment in sanitation. For the uninitiated, in most Indian cities less than 40% of their total population have meaningful access to sanitation services, but then who cares when the community is forced by caste system, , to clean there filth; a striking example of the regressive structure on which progressive idea of Indian democracy rests.

And the filth in the gutters is not the only danger. As per National Human Rights Commssion’s own admission the country has 794390 dry latrines where human excreta is cleaned manually. It had also admitted that adding to these are 1314652 toilets where the human excreta is flushed in open drains. The cleanliness campaign has, expectedly, not addressed them.

This is why the judiciary should start taking suo moto notice of such cases and prosecute the chief executive officers of the responsible civic body; establishing command responsibility makes no sense unless it prosecutes and punishes the officers, thus creating a deterrent. It must also ensure that the compensation is given immediately in cases of death. not the victims.

Until then one can have all the cleanliness campaigns one wants and pose with shiny, brand new brooms. Eradicating manual scavenging requires political will which was not there in earlier regimes and is even less expected from the new ones: our Prime Minister once called manual scavenging a “spiritual” experience.  Given that, now is the time for the Supreme Court to act.

About the Author: Mr. Pandey, alias Samar is Programme Coordinator, Right to Food Programme, He can be contacted at samar@ahrc.asia