They did not speak Kannada, the language of the state they live in. They, therefore, were “legitimate” targets of violence in a city that has benefitted the most from India’s shift from Nehruvian Socialism to free market economy. The fact that they contribute to the city, and the province’s income, meant nothing. That they pay taxes that keep the country afloat had no value. They were, after all, North Easterners stranded in mainland India. 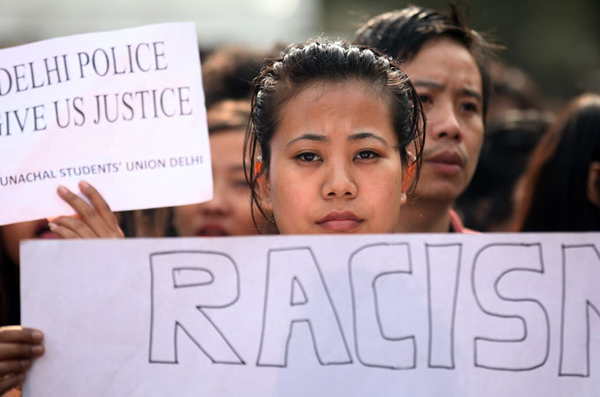 It is especially so when an outside entity claims them as its own. Let China make claims of Arunachal Pradesh as an integral part and out comes the Indian State with the mantras of sovereignty and patriotism that will never compromise on its territorial integrity. This is the time when the top functionaries of the Indian State, right up to the Prime Minister, make visits to the North East to dance with the “natives” and announce this or that package for this or that benefit of the 7 states collectively referred to as the North East.

Rest of the time they are just the ‘Mongolian fringe’ of the undeclared Aryan state, which has grudgingly accepted the erstwhile Dravidians as its own, but failed to do the same for the fringe. Failed, perhaps, is the wrong word for the State has never made a real attemptto assimilate the North East, while respecting the differences that define and shape the territory.

The failure is not always an in-your-face violence that the State, or its patriotic citizenry, inflicts on the North Easterners. There is a subtlety, at once tragic and perversely beautiful, that the Indian State deploys to achieve this failure. The State forgets, at times, to include Kiren Rijju, the Minister of State for Home and a Member of Parliament from Arunachal Pradesh, not only in the delegation for talks but also from state banquets hosted by the President for Chinese President Xi Jinping during his India visit, an omission never explained, not even to term it as coincidental. At other times, the State chooses Meghalaya as the place of punish posting for the Governors appointed under the previous government who refuse to resign as per the wish of the incumbent government.

The British colonials had always seen and treated the “Mongolian fringe” as an outpost, as a buffer from threats from South East Asia, to safeguard their Indian colony from the same. A total of 67 years after they packed their bags, independent India continues to do the same with all the repressive instruments deployed to keep the “natives” enslaved. In fact it has gone further by converting the draconian Armed Forces Special Powers Ordinance, promulgated by the British in 1942 to suppress the Quit India Movement, into the Armed Forces Special Powers (Assam and Manipur) Act, 1958, and enforcing it all over the North East.

And so do the “Indian” citizens. This is the only thing worse than the violent and subtle racism North Easterners face from the Indian state. To invoke Lawrence Liang and Golan Naulak’s idea of two distinct forms of racism, the footnote vis-à-vis the front-page, the North Easterners are condemned to face both. They experience the footnote racism in everyday life, subtle, but as dehumanising as the explicit and violent front-page forms of the same. They feel it when denied rented accommodation for nothing other than being what they are. They feel it when their food habits are not merely questioned but beget violent attacks. They feel it when the Delhi police issue an advisory suggesting that North Eastern girls not wear revealing dresses to escape sexual harassment and assault. They feel it when it is suggested by the same advisory that they not cook their regional cuisine, especially, Akhuni and Bamboo shoots, as it could offend the sensibilities of the local people. They feel it the most when they realise there are no such advisories issued for any other ethnic, regional, or whatsoever kind of community defined by whatsoever yardstick.

This is not to say that front-page racism is less endemic than these subtle forms of labelling North Easterners as other. Nor does this mean that these two are discernably separate from each other. How can one separate racist abuses like “chinki”, which can get the abuser a sentence of 5 years (as most of the North Easterners are from Scheduled Tribes and therefore protected by the provisions of the Scheduled Castes and Scheduled Tribes (Preventions of Atrocities) Act), from physical attacks that killed Nido Tania, a student from Arunachal Pradesh, in an “allegedly” racist attack?

One may do so, of course, by the liberal use of “allegedly” alongside acts of racism. What else but racism can explain the repeated attacks on the people from the North East across India? How many more murders does one need to call racism what it is? Was not the rumour mongering coupled with physical attacks on North East students in Bangalore, which lead to their mass exodus, enough to set the bell ringing? Should not the mysterious death of Richard Loitam, a student from Manipur, after an altercation with his seniors in Bangalore have made the State take special notice?

Perhaps it cannot till it remains in a permanent denial mode, i.e. until things turn violent and come under the media gaze. And, when this happens routinely, it rushes in to offer cosmetic solutions to the racist prejudices against the North East people that are institutionalised and engrained in the system. The futility of its lip service, however, gets exposed by the fact that no one has ever been convicted for even one year for racially abusing someone as ‘chinki’, forget the five year term that such an abuse can bring. Compare this with the convictions for casteist abuses covered under the provisions of the same Scheduled Castes and Scheduled Tribes (Preventions of Atrocities) Act.

I wonder how many North East citizens would, in fact, dare to go lodge such a complaint with the police; they have to live in the same neighbourhoods in mainland India to make a livelihood, where they are most often a minority. They know what their predicament would be in the police stations, which have few, if any, officers from their community, as against the offenders who would share socio-cultural bonds with many of the officers.

This lack of redress to everyday racism is what sustains the discrimination against North Easterners, citizens of India lest one forgets, and paves way for the serious periodic attacks broadcast in the media. Till the State ensures that the community feels confident enough to report everyday violations, and perpetrators get prosecuted, the vicious cycle of violence will not stop. Racism is a serious crime, not something to wish away with denial. Hope for change will begin with justice to T. Michael Lamjathang Haokip and his friends attacked in Bangalore.

Mr. Pandey, alias Samar is Programme Coordinator, Right to Food Programme, AHRC. He can be contacted at avinash.pandey@ahrc.asia