She is not one of the faces that beamed on television screens, the faces full of emotions, such as anger, dejection, and hope. Of course, no one expected her to be amidst the crowds on screen, whose animated faces were broadcast on television to mark 16 December 2015, i.e. three years of the notorious gang rape of a young paramedical student in Delhi, who later came to be known as Nirbhaya. This is the case that shook the nation and led to an unprecedented outpouring of pent up anger over crimes against women in general and rapes in particular. It had led to such an outrage that the Republic had to take note and amend its rape laws.

You would not see her face in these protests. What you will, in time, is find her in the yellowing pages of the statistics reports of the crime records keepers. Gang raped by 3 men, she is a 7-year-old minor battling for her life in Delhi’s All India Institute of Medical Sciences (AIIMS). She will be another number in the list of minors raped in the national capital this year; counting up to October 31, 824 minors have been raped in Delhi, as per government statistics admitted in Parliament. 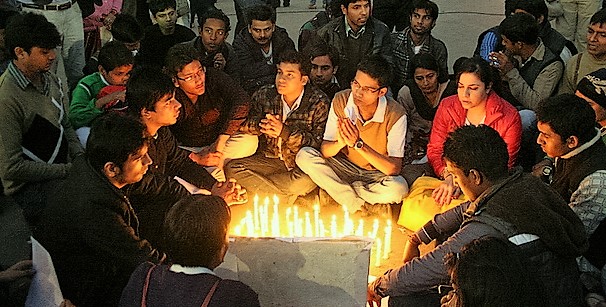 There are lies, damned lies, and statistics, and the truth here is that the tragedy of rape far exceeds what is reported. Still lets consider the reported statistics. Delhi witnessed 1,856 reported rapes by 31 October 2015; 2,166 reported cases in 2014, with 1004 victims being minors; and 1,636 reported rape cases, with 757 minor victims, in 2013. Delhi is but a microcosm of the violent reality that damages Indian society and subsequent generations. The National Crime Records Bureau, the Indian government’s official crime records keeping body, put the total number of rapes “reported” in the country at 36,735 in 2014. Most of these crimes go unreported for various reasons.

To add insult to the injury of being born in such a heartless and unjust society, she would not be in the minds of most of the protestors seeking justice for Nirbhaya. Many in the protests would not even be aware of her predicament, as the cacophonic media, the primary source of their outrage, was preoccupied with other manufactured outrages, such as the imminent release this month of the juvenile convicted in the December 16 gang rape.

This juvenile will be released after having served 3 years in a correctional home. The stories about how he was the most brutal one of the lot in the commission of the crime has started doing the rounds. Outraged media, just like the crowds, have started running headlines like “Nirbhaya Rapist to be released”, both in newspapers and news channels.

Some media outlets have even openly demanded that he be hanged, often with visuals of the parents of Nirbhaya demanding the same. They have demanded lowering the legal age for being considered a juvenile if one is accused of committing heinous crimes. The refrain is the age old one: how can someone capable of committing crimes like rape and murder be considered a juvenile. Age-old debates in different societies and communities that argue against the same are summarily rubbished here, with even shriller calls for his hanging.

Most of this outrage against him, just one of the convicted accused of committing a rape in a country that sees thousands of rapes being committed in India, comes not from any quest for justice. They are mostly rooted in the need for a closure, a forced closure, by turning the body and person of a criminal into the site of cathartic release of collective anger against rape crimes.

India has seen similar outrages substituting their anger with revenge in the past as well; a serial rape accused named Akku Yadav was lynched by his victims inside Nagpur District Court in Maharashtra. Outrage can succeed even in securing justice in the odd case. The case of rape and murder of Priyadarshini Matto and the case involving the murder of Jessica Lal are examples. Such outrage can also bring forced closure, at times, at least for some. For instance, in Nirbhaya, this closure arrived with the fast track prosecution ending in death sentence to all convicts but the juvenile, as the State feared the outrage and ensured a speedy trial.

This is also where the outrage way to “justice” comes at the cost of criminal justice reforms and often gets appropriated by those who want this system, which gives impunity not only to sex offenders but many others, to continue. The calls for justice are reduced to murderous calls for revenge. Patriarchal societies have always turned women bodies into a site of its assertion. How difficult would it be for them to turn the bodies of some poor rapists, into sites of revenge and catharsis. They know doing so can bring closure to the outrage at hand, while the social and institutional systems that keep up the violations of women and children can continue unimpeded.

This is exactly where outrage, howsoever genuine the cause, lose meanings and become weapons of revenge. This is the point where sane voices, get thrown out and the frenzied mobs take over. That is exactly where Nirbhaya protests have ended up — adding death penalty to one more crime, despite all the claims of those still known as leaders of Nirbhaya protests to be opposed to capital punishment.

Rape is a crime, a heinous one and warrants prosecution and punishment for the perpetrators. Victims should not need an outrage to get justice, not in a society that claims to be a republic. But then, the republic is the same where many of the rapes don’t get reported for many reasons. The most prominent is the stigma attached with being a rape victim in a society that treats women’s bodies as both the primary site where patriarchal codes of honour are defined, as well as carriers of purity and pollution of the caste system.

Highly insensitive handling of complainants and victims by law enforcement agencies and fear of further reprisals from the perpetrators and their accomplices adds to this and increases underreporting. The victim, here, means every victim – be it Nirbhaya or the seven year old battling for her life in AIIMS or Thangjam Manorama who was brutally tortured and killed by Assam Rifles personnel of the Assam Rifles – as established by the Judicial Commission of Inquiry headed by Justice (retd.) C. Upendra Singh.

The malaise of such crimes will continue until Indian justice institutions ensure that victims can seek redress and justice as their right and perpetrators get punished without needing a public “outrage”. Add to this the fact that most of the victims even from “mainstream” India do not see Indians “outraging” for them, forget those like Thangjam Manorama caught in the dozens of the faultiness that divide the Republic. In fact, even a rank stranger following events in India can vouchsafe that many of the ones outraged for Nirbhaya would be equally, if not more ferociously, outraged, if Manorama’s perpetrators were brought to book!

Back to the case at hand: the NCRB also shows that 1,25,433 cases of rape were awaiting trial in 2014, out of which 90,000 cases were pending from previous years. Can a people outrage for justice in so many cases? Should it mean no justice to the victims, if the people cannot outrage on and on?

PAKISTAN: Protest over UN bodies’ decision to give an award to IT minister »