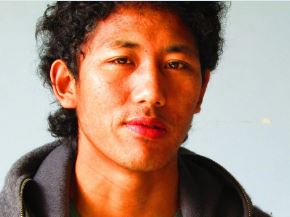 ‘A cold shiver runs through my veins and my body heats up every time I see a policeman’, is what Nyima Tsering, from Tsarka VDC in Nepal, said to reporters after a 29 July press conference. During the police crackdown on 3 June, Nyima, 25 years of age, was dragged out from a grain storehouse, beaten, and then released, only to be rounded up again by another police team as he tried to flee the village. He witnessed a bullet hit his brother’s temple. He saw a friend suffer, with burning hot gun pipes shoved into his mouth. He said he didn’t feel the pain from his torture in detention, as much as the worry about whether his brother had survived. After his torture, he was treated for two broken upper incisors and sent back home.

‘They played me like a football but with martial boots and batons’, is what Pema Tsewang, 16 years, student, said to reporters of ABC television on the 5th day of the Dolpo sit-in protest at Bhadrakali. He looked little, frail, and yet determined. He had returned home after staying more than 5 years in Kathmandu away from his parents, hoping to contribute to his community. ‘The trauma still haunts me. Nightmares are frequent at nights’, Pema admitted to the reporters.

‘We ran the whole night without flash lights, stopping near rocky caves, and ran again after we suspected we were being pursued. Before we knew it, we had circumambulated the entire Buddha-Rivo pilgrimage’, is what Dhargye Lama, 25 years, a young village Lama (religious guru) said on 5 June, his voice crackling over the static of his Dho telephone. He was fortunately among the few that did not suffer a beating, fleeing quickly across the mountains.

‘They let us sit in a sort of Lotus position, and jogged and jumped on our legs, as if we were trampolines. One of them shone the light and kicked me right in the face’, is what Ngaten Choephel, 25 years old, a winter teacher in the local school, said in Nepali, in documentary footage. He was one of the detainees targeted and tortured for speaking up for his rights.

And so stories read. Every person from the locality has a story of pain, fear, and suffering, endured on a black day in Dolpo history. But, the subsequent media outcry has only fallen on deaf ears. A marathon sit-in protest was carefully ignored. And, worst of all, another round of threat and drama has begun to repeat itself.

The wife of the martyr Tsering Phurwa frantically ranged me up from Dho village at 5:14 p.m. on Saturday, 11 June. She was panicking, and sounded confused and lonely. She said the police had summoned her from her camp in the Dho pastures, which is a difficult 4 hours a day three days long walk away. Not only was she then pressured to confess that her husband died by ‘falling-off a cliff while collecting timber’ (a change from the earlier ‘cutting grass’ version). She was threatened that ‘she would not get the one million Nepali rupees compensation promised after the death of her husband on 4 June, and that the twelve ex-detainees would be taken to Dunai for actions accusing them of killing her husband if she didn’t do what she was told’. She had become depressed and hopeless.

All I could ask her to do was calm down, since I was not in any position to promise anything, save bringing her voice to you without fear or hesitation.

The villagers have held a meeting and conducted a kind of referendum on whether to pursue resistance or give it up altogether. Most people are now already without hope and have felt threatened to the point of giving up. There are but few who are bravely considering the risk of speaking up once again, and this time for justice.

After a protracted discussion, the villagers unanimously voted to fight for justice amidst the growing hurdles and confusion. They have decided to reject the ‘one-sided regional investigation committee’ set to fly to Dho village by helicopter when the weather clears, and, in turn, have demanded a ‘high level and inclusive central investigation committee’ with a mandatory representatives each from the victim’s side and from human rights groups. In case of failure to do so, they have threatened to collect all the citizenship certificates and dump them in front of the District Administration Office in Dunai. The gesture aim to show the irrelevance of the citizenship certificates that have not safeguarded the rights the social contract embodies, such as the rights to security, peaceful livelihood, recognition, and justice.

Every passing day the pain and fear of my fellow people make me depressed in turn but there is not much I can do. Our incumbent government is preoccupied with purchasing super-luxurious bulletproof German cars for showing-off at the SAARC summit, or designing a fat Constituent Assembly trust, or holding extravagant party conventions full of hatred and lust for power. When will these people – Nyima, Pema, Dhargye, and Ngaten, along with all other Dho villagers – feel safe again and relegate the horrendous events of 3 June to the past? When will they get the rights their citizenship certificates entitle them to?

Justice and compensation appear a far cry, at least for now. But, when will the government begin to understand that these dignified peaceful people are entitled to and capable of standing up for their rights? Does the government listen only to violent Nepal Bandhs or chakka jams or worse, instead of passive resistance, such as sit-in protests or hunger strikes?

About the author: Phurwa Dhondup is one of the victims of the violent police crackdown on 3 June 2014, and a member of the indigenous Dolpo community who make their home in the upper reaches of the Dolpa region.