The power of a community depends not only upon its numbers and its economic resources and its technical capacity, but also upon its beliefs. (Bertrand Russell – Power – P. 99)

The problem is not rising from outside but rather from within themselves. As long as the world about them does not change, the regime will remain content with their way of life and indeed, feel superior to other people around them as they can ignore them. The trouble is that the world is changing as it happened in the past. This ironically points to the need that we all have to understand, not only what the regime is doing, but also what other organizations are doing as well. However, the present regime is still able to manage the ground situation in the country while continuing their vulgarism as political ideology. Under these circumstances, the regime is still lucky to enjoy their ultimate power. 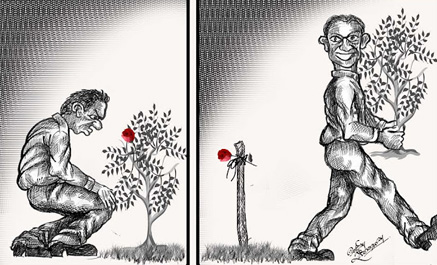 As long as the opposition parties engage in tickling politics that makes fun for them, the norm of freedom will never be born due to dissimilar power. But the people who are suffering most from this uncertain power would continue to manifest the tensions of life and the nudity of social control. These People represent the insight of the politicians. The current regime is thus seeing itself through its insight, the people, without the clothes of civilization acceptable to outsiders. From time to time, the people come out in their natural form, and become visible to the wider world and that is when the regime stands stripped of its clothes.

Keeping a weaker opposition or opposition with multiple internal conflicts or rifts is an important factor for the absolute power to systematically assassinate the social order and introduce disorder to the system. And then, as Slavoj Zizak described, we enter the situation where the regime only, “imagines that it believes in itself”. In Zizak’s words, “The formula of a regime which only imagines that it believes in itself” nicely captures the cancellation of the performative power (“Symbolic Efficiency”) of the ruling ideology: it no longer effectively functions as the fundamental structure of the social bond.”  (quoted: First As Tragedy Then As Farce — Slavoj Zizak) This is exactly what Sri Lanka, like others countries in subcontinent, is facing.

Society’s direction has been changed into what we are imaging, and our imagination has always been limited by experiences. Power can create new experiences to limit your exploration and it can put entire society in the cage. Nevertheless, the regime can continually enjoy their rule as long as they are able to break/close the tunnel that updates the people about the dynamics of power. In this situation, the regime is always speaking directly as an emotional vampire and it continues to mobilize horror mythology. It fuels emotional destructions rather than constructing the wall of common ideologies. It gives birth to intolerance while making cultural diversity of ethnicity, the point of social repression. Depression and hopelessness will be constant social phenomenons and many people will believe that there is no alternative if we lose the present.

President Mahinda Rajapakse has created his whole political argument with this principle and has taken the country into his control. What he is carefully engaging in is to control the possibilities of the rise of an alternative force that can tackle the trap. That is why the President is still on the loggia of power even after facing tremendous challenges from the international community and the people who live outside the country.  In these circumstances conditional release of the former Army General, Sarath Fonseka is a tactic that the President has applied to whitewash his nudity of bad governance. What we cannot forget is that cattle can eat grass as long as its keeper has the rein. In other words present opposition in the Country is not another version of the quails’ story where the quails gave a good lesson for the farmer who tries to hunt them. Today, the opposition in Sri Lanka is the symbol of dissension, which could be possibly changed by an accidental event. Fonseka’s first political appearance was an accident, but his second induction created challenges.

Yesterday (June 17), it was reported by Colombo-based newspapers that General Fonseka has hardly created a common political front with some politicians while key members of major parties are opposed to joining him. In this situation he will be another different version of old leftist activist — like a sheep without skin. This is not the first time in political history in Sri Lanka when a rein has used power against its opponents. The sad reality of our country is that political rein works in favour of the power, thus it has destroyed many possibilities of check and balances. If this had not succeeded, the entire society might have changed in 1982 when many opponents were cracked down to assassinate the new dawn of politics by the absolute power. At that time it was cynical manipulation of power by former President JR Jayewardene; and later it created a priceless loss to our society. None of us seem to have the capability to project that the same incident in different face will be repeated, because sincere ignorance and conscientious stupidity are major factors within opposition.

However, nobody can reject the claim by some analysts that the Sarath Fonseka phenomenon is the logical outcome of this process of politicisation of the military. He is not the sole cause but only a significant consequence of this long process. At the same time what we cannot ignore is that as Niccolò Machiavelli noted in his prime work, The Prince, “…. prince who, relying entirely on their promises, has neglected other precautions, is ruined; because friendships that are obtained by payments, and not by greatness or nobility of mind, may indeed be earned, but they are not secured, and in time of need cannot be relied upon;…” (quoted: The Prince – Niccolò Machiavelli ).

Before creating a new front of common opposition, Sri Lanka needs today the courageous rehabilitation of the idea of a pre-emptive strike, “war on terrorism”, the most abused words (concept) in the past decade of internal politics. It has expanded absolute power which was introduced through the 18th Amendment to the 1978 Constitution; it has created its own justification to infringe freedom; and it has instigated nepotism. Fonseka’s dream to wipe out “rampant corruption and nepotism” prevalent in the country, abolish the executive presidency and restore an independent judiciary will be a utopia without rehabilitating our ideological wrongness. Then beliefs will change and fanatical creed will replace rational hopes where new political direction could open.

« THAILAND: Call for observers–torture victim sued by Pol. Gen. Bhanupong Singhara for a complaint made in good faith

SRI LANKA: Attack which killed two attending JVP meeting is a forewarning of another round of terror »