Many stories revealing many different opinions are coming out. The writers are screaming, refuting, condemning and justifying what has been and their articles show the concerns of many people. Meanwhile, the social media has played a huge role and shared both sides of the story more freely than might have been done some years ago. Technology is being allowed to play a crucial role which would have unimaginable until just recently and as a result the entire world found out what is going on in this island nation within hours.

However, now it is confirmed that three people have died and many more were wounded in the violence which erupted last Sunday (June 15). Even as the flames rose skywards the people in the area were even unaware of who was attacking whom and why because they had lived their lives together for a long time in peace and harmony. 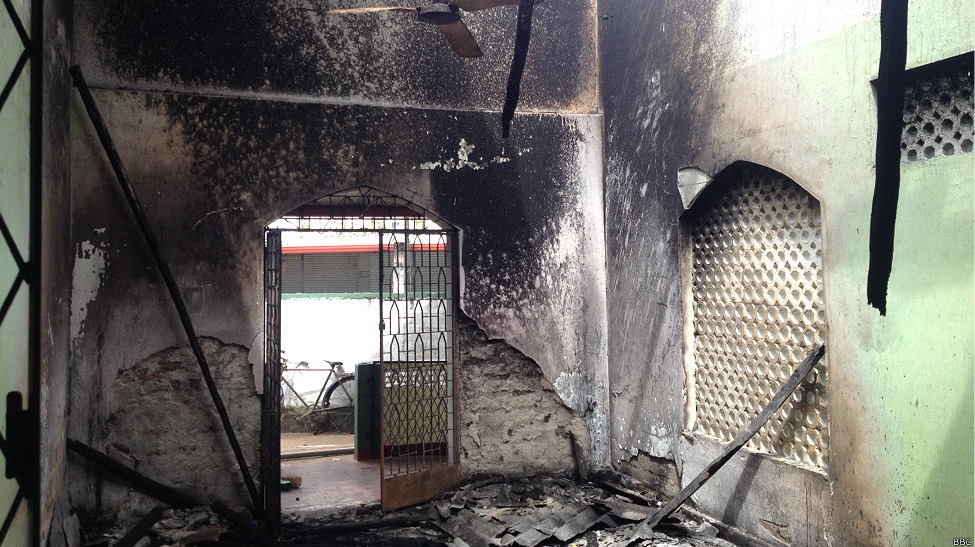 According to eyewitnesses it was a pre-planned attack by a group who came from outside, motivated by extremists of both the Sinhalese Buddhists and Tamil speaking Muslims. In one incident attackers entered a house in the village and asked two women to come out. They wanted to chop them to death on the road. Fortunately, others prevented the crime from happening. In fact many Sinhalese Buddhists were there to offer their hands to their Muslims neighbours when they came under attack. This is similar to what happened during the communal riots in 1983 in which Sri Lankan Tamils came under attack by Sinhalese hardliners, motivated by the government and some other groups. People in general, perhaps the majority of the public do not see the need to impose violence on others. The majority of Sinhalese have that good record but, unfortunately, like in many other countries there are groups fuelled by extremism that give a greater degree of national shame to the people.

Unfortunately there have been wide misinterpretations on the crisis which has resulted in different reports on what happened. Those misinterpretations have resulted in different orientations of the actual picture. Even many media people described this as communal based violence. But it is not, this is sectarian violence. Sectarian violence is nothing new in Sri Lanka, but it has never been seen to the degree that has witnessed during the communal violence of the last few decades. In 1915 there was a deadly outbreak of sectarian violence between Sinhalese and Muslims in the central province of the country when it was a British colony. According to reports over twenty people were killed most of them Muslims.

The violence that erupted last Sunday is similar to the incident which was reported in 1915 but fortunately it has not claimed the loss of life that occurred during that time.

However, the country is again on the knife edge of extremism and there is a possibility of that the violence will exceed will damage the entire nation if the government does not take proper action immediately. To take proper action is the main challenge for this country. However, action against whom and by whom is the main question.

There is no doubt that the majority of citizens do not deserve the adverse reputation that the government is bringing down on us. The country itself is undergoing tremendous stress even five years after the bloody civil war, while internationally its faces isolation due to its political vulgarism and bad governance by the present ruler.

How can we solve the situation? What alternatives are left to us to keep this society away from violence? There are two main factors in answering this: the first is the criminal justice system, which has been further deteriorated by the present government in order to get rid of their personal difficulties. The second one is Sri Lankan Buddhism and the restoration of its leadership.

Having an authentic criminal justice system in any country is one of main answers to the lawlessness. There is no other way to solve the very crisis that the society is undergoing. But in Sri Lanka, not only the politicians but also those who are working in the courts are also helping in destruction of its structure. It is very visible in the degree of professional negligence in the criminal justice system. The situation is indeed pathetic.

On the one hand, the ruler has assassinated the trust of the people in justice which can be achieved through a functioning criminal justice system, while detaching people from the state institutes. On the other hand those who are working in the institutes are deliberately damaging its dignity and respect to gain political advantages.

It is a daydream to think of overcoming these nightmares the country faces without annihilating the horrendous manipulation of those who authorised the disorder in the country. There must be public discourse where the people in general can understand the importance of the Criminal Justice System and what they need to do in order to help those genuine professionals. Perhaps it must be asked as to how the public can engage in the main cause of re-storing the functioning criminal Justice system.

In Sri Lanka, there is minimum understanding about the whole system and anyone can cynically manipulate the public by fuelling heroic-based stupidity and emotional behaviour. The rise of Bodu Bala Sena, Rawana Balaya and yet unknown but indeed dangerous small Islamic extremists’ elements is a very relevant fact. Those elements were not just the creation of certain men or a group; they are symptoms of a long term epidemic in this country. True, the politicians including present President Mahinda Rajapaksa and his dangerous brother who is the Secretary Defence are using those tools to maintain their impunity. That any corrupted and abusive tyrant can keep his power as long as he can maintain those extreme groups, is an idea they many have believed. Perhaps, the many elections conducted in Sri Lanka show the importance of emotional racial and sectarian thought rather than rational ideas of good governance.

However, apart from the state institutes which are discussed above, Buddhism has a major role play in this country. In fact, Buddhism has been the constitutional state religion in Sri Lanka since early 70s. The majority of Sinhalese are Buddhists but there are hardly any Tamil speaking Buddhists in the country. Creating the Tamil speaking Buddhists community in the country was systematically evaporated by certain groups, which is not merely the Sinhalese Buddhists’ modus operandi but certain Tamil groups were also involved in it as well.

During the civil war, Buddhists and Muslims united to play an undeniable role against the Tamil militants. Winning the war was a collective task, therefore many well-trained persons of Muslims origin, spies, soldiers and civilians also sacrificed their lives in war. Perhaps many Tamil people too offered their tremendous help in the victory as well. It was my personal experiences that during the war time in many war toned areas I visited, the Tamil people gave their tremendous help to eradicate the Tamil Tigers, confirming that the Tigers could not fulfil what the Tamils really need.

But unfortunately after winning the war, the ruler and his family and certain extremist Sinhalese claimed all the credit for the victory and started a propaganda campaign for the “exceptional land” of Sinhalese Buddhists in the world. The Ruler’s family could do this easily as there was an in-depth internal crisis within the Buddhist temple which was divided for many reasons such as caste and so on.

Malwathu and Asgiriya are the main chapters of Sri Lankan Buddhism, but many monks ignored or kept ad hoc based consultations with them. First of all there must be a serious reconciliation process to establish unity, dignity and peace within the Buddhist temple itself. This can be headed by the main chapters and they should make open invitations to all monks, including those who are living abroad to conduct a great convocation similar to what Buddhists monks did many times in the post Gautama Buddha period when the religion came under attack. This great convocation is the need of the hour. The great convocation must be held without any political influence or representation. Otherwise the tyrant and his clan can come in white suits and destroy the very concept of it.

In the great convocation the leadership of monks must be establish an independent committee which can monitor, record and complain about all monks independently and audit the assets belonging to all temples and monks. And then according to Vinaya pitaaka or established exclusive traditions by the temple, it must prosecute those monks who are destroying the basis of this great religion. The elected committee also must be taken care of the finance of the monks, as there are many monks maintaining their own process to earn, collecting and spending those funds from local as well as international agencies. Rather than recipients and the sender no one knows what the real intention or deal is with those agencies. But one thing is clearly visible; none of these violence-based groups or those who are sending money to them is concerned about long lasting peace, dignity and respect of our people and the country. They are merely engaged in destroying the very humanity of the people. This must end, immediately and then the Temple can address the other core issues of the country.

We all have tremendous responsibilities to protect the hard earned peace in order to take the country towards a lasting peace where all communities can live with dignity, peace and harmony. The real Buddhists have a major role to play in this very cause. We must act together before the tyrant and his clan fuels another type of crisis to have bloodshed in this country. Do not forget the tyrant is on a knife edge himself as he has to find way out due to the crimes he committed against our people.

The sectarian violence that erupted in Aluthgama last Sunday brought to glaring light these very issues we need to understand in order to move forward.