PAKISTAN: World Day Against child labour–plight of child labourers at teashops and restaurants

Like many other poor countries, child labour is a socially acceptable phenomenon in Pakistan. There is a long list of formal and informal sectors teeming with child labour across Pakistan. However, top among these sectors may be agriculture, auto workshops, rag picking and teashops, which harbour significant number of underage working children. One can find children as young as 5 year working in these sectors. Chronic poverty coupled with lack of political will is the driving force to push children of marginalized families into labour. Besides social vulnerability, these children are prune to frequent fatigue, muscular-skeletal disorders, cuts, fractures, burns, malnutrition, poisoning, infectious disease, psychological harm, and even death, depending on the type of work they do. 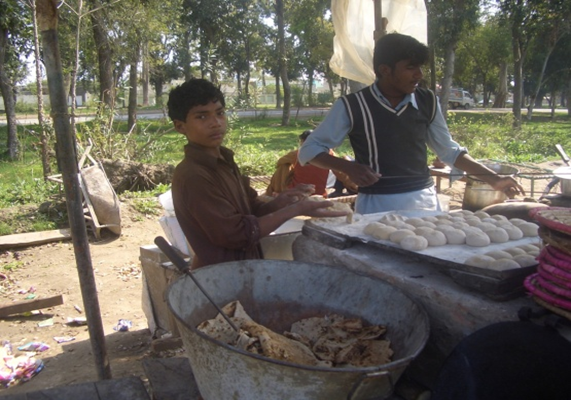 The Employment of Children Act of 1991 prohibits the employment of children less than 14 years of age in specified occupations and processes that are dangerous or hazardous to the health of child workers. The Act regulates the hours of work for children and adolescents to no more than seven hours of work per day and bans work after 7 p.m. and overtime. Also the employers are required to maintain a register of child workers.

But the compliance of national and international laws are visibly and openly violated in all parts of the country. Government of Pakistan is also signatory to International Labour Organisation (ILO) convention 182, which prohibits involvement of children less than 18 years in Hazardous work. However, under the nose of the government and labor departments, the menace of child labor is flourishing with least check.

This scribe happened to talk to a child laborer at a teashop at Joharabad Bus Stand and observe the inhuman working conditions, in which he has to work. It is really hard to describe the plight of these small children working on roadside restaurants, tea or sweet shops etc. The parents of these children face hardship in the villages and cannot even meet their primary needs such as food, clothing, shelter or healthcare. They do not give priority to the education of their children as they assume that education does not have immediate results. Instead the child at a tender age is encouraged to hold adult responsibilities of contributing to the family income. Cheap labor demands are high and skills are not required for this job. These children do not have any option other than working in whatever job they can lay their hands on.

A key to survival, children find refuge working in restaurants as food and shelter are generally provided in addition to minimal wages for their efforts. In return they carry out menial tasks for their employers, responsible for counter service, dishwashing, waiting tables, cleaning, running errands or any other type of work required in the teashops/ restaurants.

The teashop boys normally start their work before sunrise performing a long list of chores determined by the employer. These include cutting vegetables with dangerous tools, cooking in smoky kitchens without proper facilities for ventilation or exhaust fans, lighting kerosene/ wood/gas stoves or hauling water from distant taps. A child worker continues these tedious chores throughout a day’s work, often more than 12 hours without any rest, exhausting them physically and mentally. Employers do not heed the working capacity of a child, rather they demand more. Should a child worker make a mistake, say breaking a glass while washing the dishes, the employer punishes them with physical or verbal abuse and deducts the cost from the child’s wages.

Johrabad bus stand is hub of many small level hotels & teashops. On these shops, children are involved in tea & food making and serving. Most of these boys are migrated from adjacent villages. Their average wages are only Rs.20-50 daily. 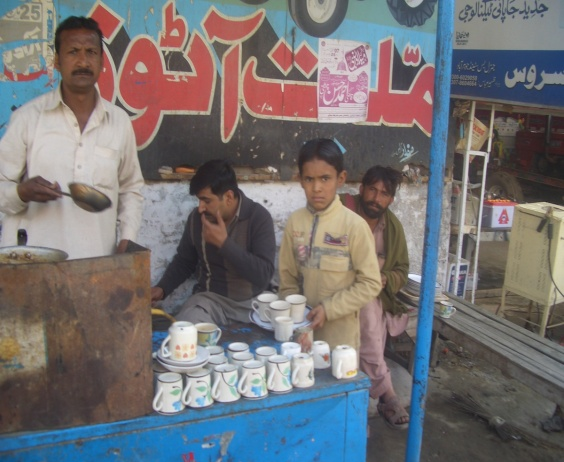 One of these boys, Shamsher is just 10 years old and works at Bismillah tea stall at bus stand. He has six brothers and sisters; he is fifth in number. Shamsher’s father-a daily wager died in accident when he was still young and that was three years ago. “When he came to work around six months ago, he was very diffident, very quiet with a constant expression of fear on his face. Since then Shamsher has opened-up and become mischievous and chatty, even playful sometimes”, told his employer Anyat Ali.

He is often scolded and sometimes beaten also by his employer but, being a child, he does not remain crest fallen for long and is again cheerful and up to his childish antics the very next day. Shamsher earns Rs.40 and is given two meals, which comprises of two chapatties a small portion of sabzi (vegetable curry), and some Dal (watery lentil soup).

Personal hygiene, healthcare, education, rest, breaks or any entertainment is least available to children working in tea shops/restaurants. The working children have to sleep on the floor or on the tables, which is possible only after closing time. They rarely have the opportunity to sleep on real beds, have to get up early in the morning and sleep late at night when customers have gone. Most of the teashop boys wear dirty clothes and lack sufficient water for hygiene and cleanliness. Fatigue from continuous working hours does not provide them time for changing clothes washing or bathing. There is few employers kind enough to provide fresh food otherwise children get stale, leftover or days old food.

Most of the children are not aware of child rights or labour laws. However the employers, who do posses this knowledge, defend themselves with the argument that they are not actively seeking children for exploitation rather the children themselves approach them. The children desire work to support themselves, their parents/families. So is it wrong that employment is provided and both parties profit. This perception, which comes from the employers’ side, cannot be ignored. But, quite often children become victims of physical, mental, and economic exploitation – denied payment, extensive working hours without breaks and no education or health support.

Child labor is a serious socio-economic problem in most developing countries like Pakistan. It is also an important human rights issue in the Pakistan. Extreme poverty has forced many children to do any kind of work even it is a hazardous one. There are millions like innocent Shamsher working on teashops, auto workshops, brick kilns, agriculture and dozens other sectors. It is very difficult to make a precise estimate of working children in Pakistan on account of numerous limitations basic being a lack of data.

According to the last National Child Labor Survey conducted by the government of Pakistan in 1996, 3.3 million of the 40 million children (5-14 age groups) were economically active on a full-time basis. Of the 3.3 million working children, 73 percent (2.4 million) were boys and 27 percent (0.9 million) were girls. However, the unofficial estimates quoted by non-governmental sources are much higher.

These official figures were released more than ten years ago and had many loopholes. The actual number of child labourers will be higher than suggested official figures, and is expected to be over 10 million throughout the country.

About the Author: Bushra Khaliq is a writer from Pakistan. She has been partnering with the Women’s International Shared Experience project in Pakistan and coordinates Women in Struggle for Empowerment as their Executive Director. She can be reached at: bushra.khaliq@yahoo.com.