SRI LANKA: If Sri Lankan Tamils had an Ambedkar 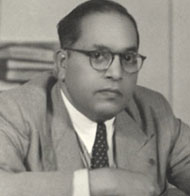 Over the years, Sri Lankan Tamils have had leaders such as J.V. Chelvanayagam, G.G. Ponnambalam, Appapillai Amirthalingam, Velupillai Prabhakaran and Karuna Amman to name a few. The first three names belong to a group of elite Tamil leaders who were, in essence, Democrats. But their idea of democracy was limited, similar to the democracy represented by the elite Sri Lankan leaders at this time. For them, while they aspired to hold positions in Parliament and to represent the interests of the Tamil community, the actual articulation of the problem was limited. They tried to be specifically Tamil by stressing the oppressive nature of the majority community, which was of course, a very real political factor. However, they did not try to discuss the internal contradictions within the Tamil community itself.

The Tamil community has been deeply divided by caste. Any kind of real democratic change would have required that this internal contradiction be addressed by this community. There were attempts by leaders such as Shanmuganadan to raise this issue of the internal contradictions by attempts such as temple entry movements. Even in the case of drawing water from wells, there were rules within the Tamil community which disallowed those who were considered lower caste from using the same water wells as those used by upper castes.

The purpose here is not to give a detailed account of the caste practices within the Tamil community but to recognize a factor which is not controversial. Elite leaders have never tried to articulate this problem in a democratic fashion that would allow for a greater understanding of the challenges that Sri Lankan democracy is faced with. Had these early leaders of the Tamil community raised the issue of the internal contradictions of caste within their community they would have easily won the majority within the majority of the Sinhala community.

Many within the majority of the Sinhala community are people who deeply feel the internal contradictions within Sinhala society. They would have seen the Tamil leaders bringing awareness to a common problem that could have united them in the struggle to find the lasting solutions to these problems through a united effort of both the Sinhala and Tamil sections who are victims of this long-standing discrimination.

This would have also cut across some of the attempts to see every demand made by the Tamils in purely racist terms. A far-seeing leadership would have seen in this strategy, a way to democratically resolve both the issue of equality within the recognition of dignity of all people irrespective of caste, which would have naturally lead to the issue of recognizing peoples equality irrespective of ethnicity or race.

With the development of Tamil militant nationalism, the leadership did recognize the internal contradictions within Tamil society. However, in the political articulation of their programs, they did not adequately address this issue as a central issue of democracy. Rather, they resorted to the creation of an irreconcilable difference between the majority Sinhala community and themselves.

This was of course, required by the very nature of the shift from a democratic alternative to an armed struggle. Once the slogan of armed struggle was raised, it is quite natural to paint political problems in a black and white way. The enemy should always be portrayed in an entirely unfavourable light. Also, this requires an artificial unity amongst the persons for whom the armed struggle is being fought. In this instance, the armed struggle was fought for Tamils. Therefore, prominently raising the internal issue of caste would not have been helpful when painting this black/white distinction, and constructing easy analysis and development of narratives in terms of the history of the problem.

The very articulation of the problem required that it would be articulated within racial and ethnic stereotypes which would fit easily into the understanding of people outside of this culture who could identify with this larger issue more easily. In spite of that, their own internal contradictions led to the use of extreme violence against the Tamil leaders themselves by militant leaders. Though this appeared purely as an attempt to move from traditional leadership to militant leadership, it was also an act of revenge politics against those who were former oppressors against their own social group.

The violence exercised against their own oppressors would have given a heroic status to the militant leaders among the more oppressed sections. This is a natural situation when the struggle articulates itself in this way; to see those who deal violently with their oppressors as heroes. Thus, for building heroic images, such violence would have been helpful. However, the failure to articulate this issue in a rational way resulted in creating an artificial conception of ultimate objectives which, ultimately, would have held the germs that would destroy the movement.

If they had had an Ambedkar, what would have been the difference? Ambedkar represented the greatest known form of discrimination known to the history of humankind. There is hardly a parallel of any kind of oppression to the one that is known as untouchability. Indian untouchability is worse than caste discrimination; it is the complete rejection of human beings as human beings in totality. The meaning of untouchability itself is that people in that category should not come into any kind of connection with those who are considered the privileged or the top layer of the society. They should not be seen or heard or touched, even by way of the air that both will breathe. It meant a prohibition against eating together or the use of water ponds where people bathe, and went into every possible detail of dress, way of speech and of course, everything that has to do with education. Education was completely denied to the untouchables. Today, it has been well explained that this form of discrimination was worse than slavery or apartheid.

Ambedkar was himself the child of an untouchable at a time when untouchability was real. It was sheer accident that because of British colonialism and the recruitment of untouchables into the lower ranks of military, that Ambedkars father walked out of the rigour of untouchability. With the small earnings they made, this generation of the first untouchables with a small sense of freedom spent their resources on the education of their children. It was this which provided the beginnings of Ambedkars education. At the school, it was a complete oppression, to the extent that getting water to drink from the same tap as other students was forbidden to Ambedkar. He relates some touching events where even as a child he was led to humiliation on such issues as the drinking of water.

As Ambedkar developed his own leadership, this awareness of deep oppression led him to want nothing less than the complete end of this form of oppression. His slogan was the annihilation of caste. However, Ambedkar connected this goal with another goal which he considered to be even higher; this was that the ultimate aim of all his work was the achievement of equality, liberty and fraternity.

Ambedkars writings have been permeated with a deep interweaving of the democratic ideal with the ideal to overcome the oppression of his people. His capacity to see the struggle within the totality of the struggles of the Indian people made him a supporter of Indian independence, and allowed him to be recognized as a leader by people of other sections too. Not that they were fond of him. In fact, he was one of the most hated characters by Indians of the other upper caste at the time. However, he could not be ignored. He articulated himself within the entire framework of the democratic struggle, to the extent that leaders like Jawaharlal Nehru and Mahatma Gandhi who opposed him in many ways, assimilated him into the Cabinet of Nehrus government as the Law Minister. In this capacity, he was also the chief draftsmen of the Indian Constitution. As a result, the Indian Constitution recognizes the problems of all Indians with regard to the issue of untouchability and other forms of oppression within their society. True, it was an inadequate recognition. However, Ambedkar understood that such struggles are fought at different stages and that his primary work was uplifting, educating and making ways for his community to participate in the political process. In this way, Ambedkar developed a different model of dealing with deep oppression.

On one occasion, he stated that if he wanted to create chaos in India, God knows that he could do it. However, Ambedkar deliberately opted to move himself away from leading the struggle to the brink of violence. The whole issue came under heavy points of confrontation when negotiations were being done by the British in 1936, Ambedkar stood for specific representation for the untouchables. Gandhi, representing the Hindu community, agreed in the main agreements arrived with the British. On his return, he went back on his word and requested the British to remove that part of the agreement. They were unable to do that and then Mahatma Gandhi entered into a fast unto death for getting this particular agreement removed.

At that point, Ambedkar was pushed to the extreme, and entered into an agreement known as the Poona Pact. Ambedkar, on the one hand, saved the life of Mahatma Gandhi. On the other hand, it saved bloodshed and the degeneration of the struggle into a violent conflict in India. At that point, he said disappointedly, Gandhi has his life, but we lost our rights. But he knew there was another day to fight. When Ambedkar finally made the decision to totally abandon Hinduism, and to call for a completely culturally different approach to fighting for the freedom of the Dalits, he knew that his compromise came at a great price. He has avoided the upper caste that have the shrewd knowledge of the use of violence in order to suppress the oppressed, not to have that advantage. Having done that, he was a wise leader for his own people. However, his wisdom helped the majority to see the problem in a different perspective.

Perhaps the time has come for the enlightened Tamil opinion to seriously understand the linkages between the democracy and the minority rights. In that, they would know that there is a majority within the majority community, who are also oppressed by caste. If the caste barriers are cut across, there will be a creative regeneration of energies in Sri Lanka, to achieve a more egalitarian society which will not only resolve the deepest forms of oppression that are in both communities, but also to the advantage of Tamil minorities and other minorities to resolve their problem within an overall democratic framework which would benefit them without harming others.

« PHILIPPINES: Five months on, no charges filed against soldiers who tortured indigenous villagers

SRI LANKA: Samples of brutality that happened in the late eighties  »